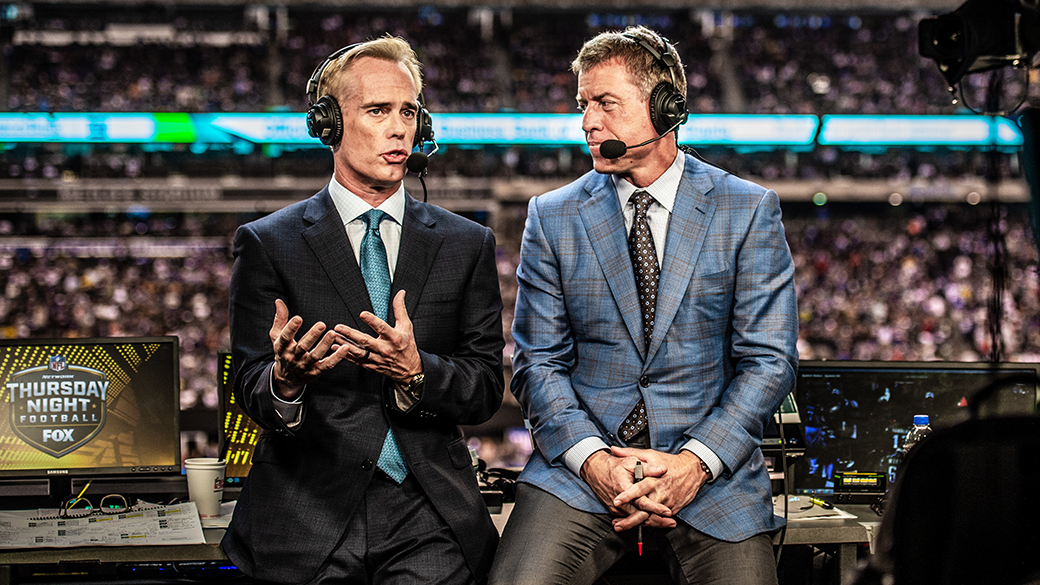 AMERICA’S GAME OF THE WEEK Reigns as No. 1 Show in all of Television for 11th Consecutive Year

Throughout the regular season, the network continued to produce uncontested studio coverage. With an average audience of 5,002,000, FOX NFL SUNDAY saw a viewership increase of +6% compared to last year (4,719,000 viewers) to rank as the No. 1 NFL pregame show in its time slot and marking the show’s best performance in four years. FOX NFL KICKOFF delivered its best season ever with 1,349,000 viewers, up +3% from last season (1,309,000 viewers).

Across digital platforms, NFL on FOX had its best regular season ever, with the streaming audience growing +57% over last year, and the top-performing game (Cowboys-Patriots) drawing 564,000 viewers. 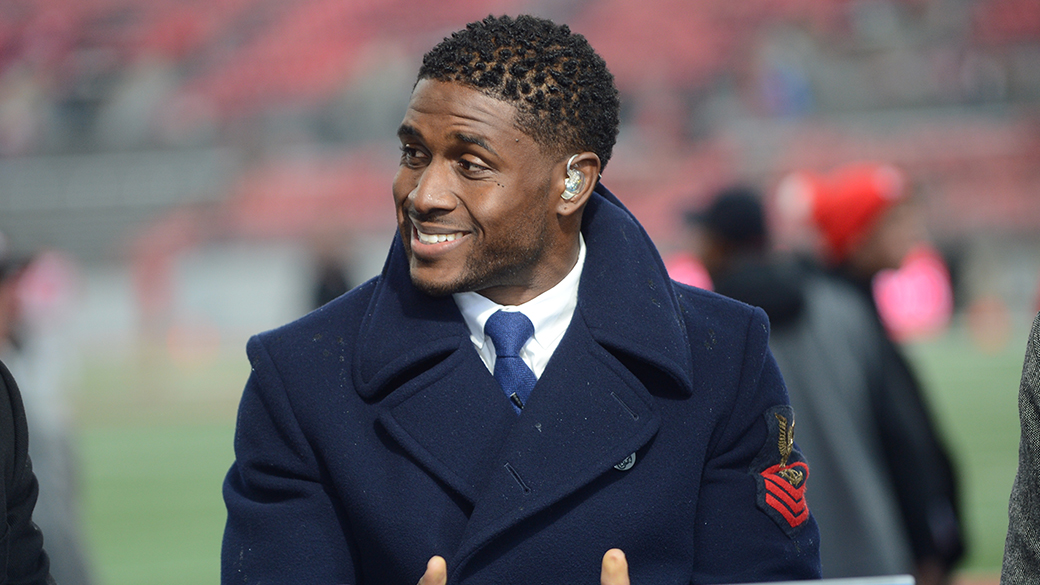 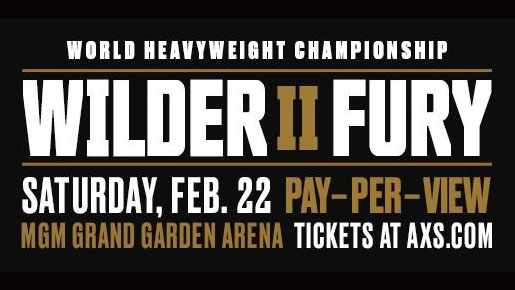 Tickets are on sale tomorrow, Saturday, Dec. 28 at 10 a.m. PT and can be purchased at www.mgmgrand.com or www.axs.com. The event is promoted by BombZquad Promotions, TGB Promotions, Top Rank and Frank Warren’s Queensberry Promotions. A Premier Boxing Champions presentation.

“I’m happy and I’m excited that the rematch is finally happening,” said Wilder. “I want to give the fans what they want to see. I’ve been doing it with my last three outings – Fury, Breazeale and Ortiz. They’ve been spectacular events – from my ring walks where I gather all the energy of the people, to my uniforms that I wear to help spread that energy. Then I give them what they all come for – the knockouts, and my knockouts have been amazing. I proved myself the first time and I’m ready to do it again. It was a very controversial fight. I promise my fans that there won’t be any controversy with this one. I’m going to finish it.”

“There’s no more ducking and diving,” said Fury. “The date has been set, and the ‘Bomb Squad’ is about to be securely detonated and the real champion crowned as the world watches on for the most anticipated fight in years. This is unfinished business for me, but come February 22, this dosser will finally get what’s coming to him, and I can’t wait!”

Wilder vs. Fury II has been highly anticipated since their first meeting when Wilder retained his title via split draw after Fury miraculously rose from a 12th-round knockdown to finish the fight. It is one of the most memorable moments in heavyweight history and has raised the historical stakes heading into the rematch February 22. 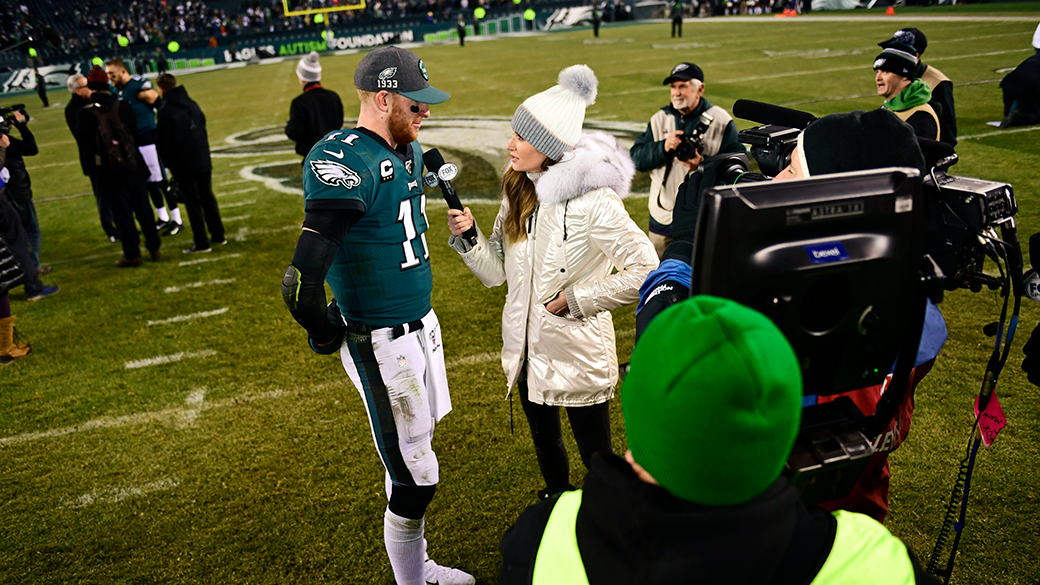 Another top-rated performance for America’s Game of the Week in the books. 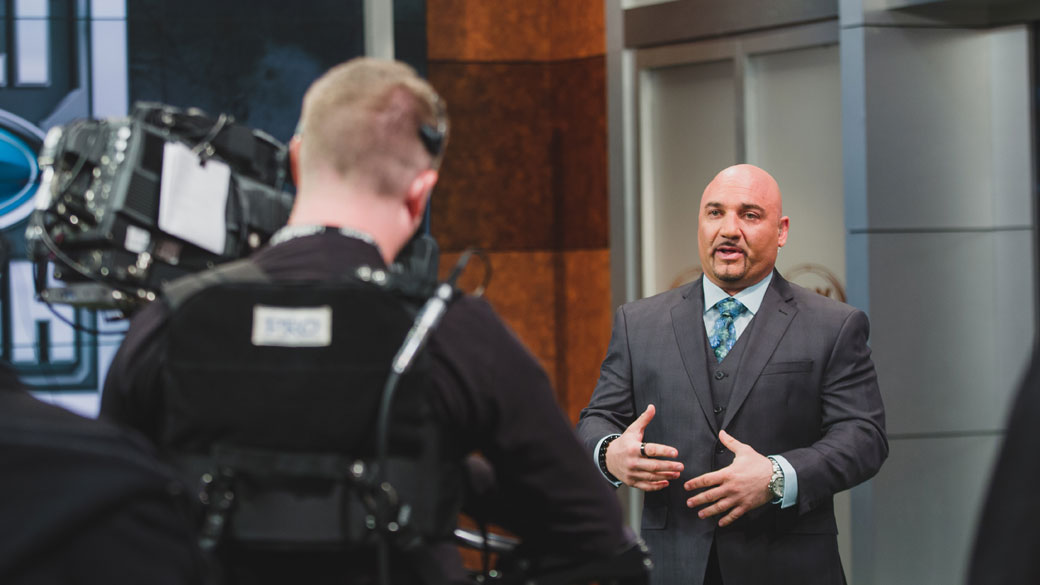 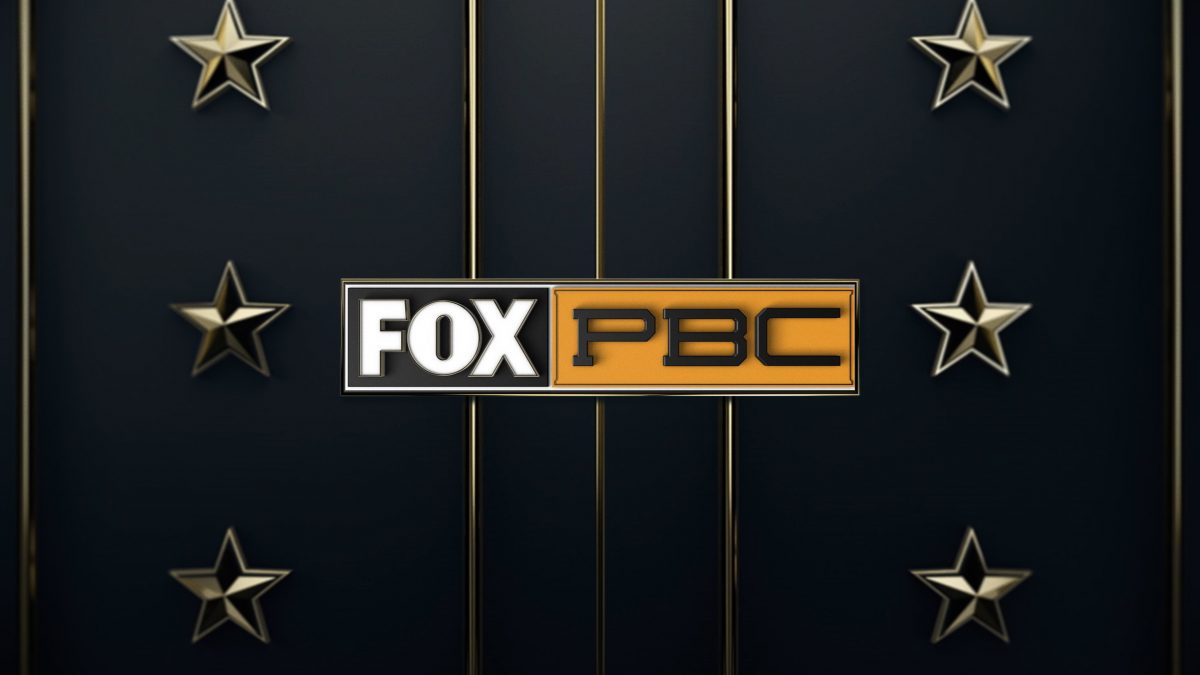 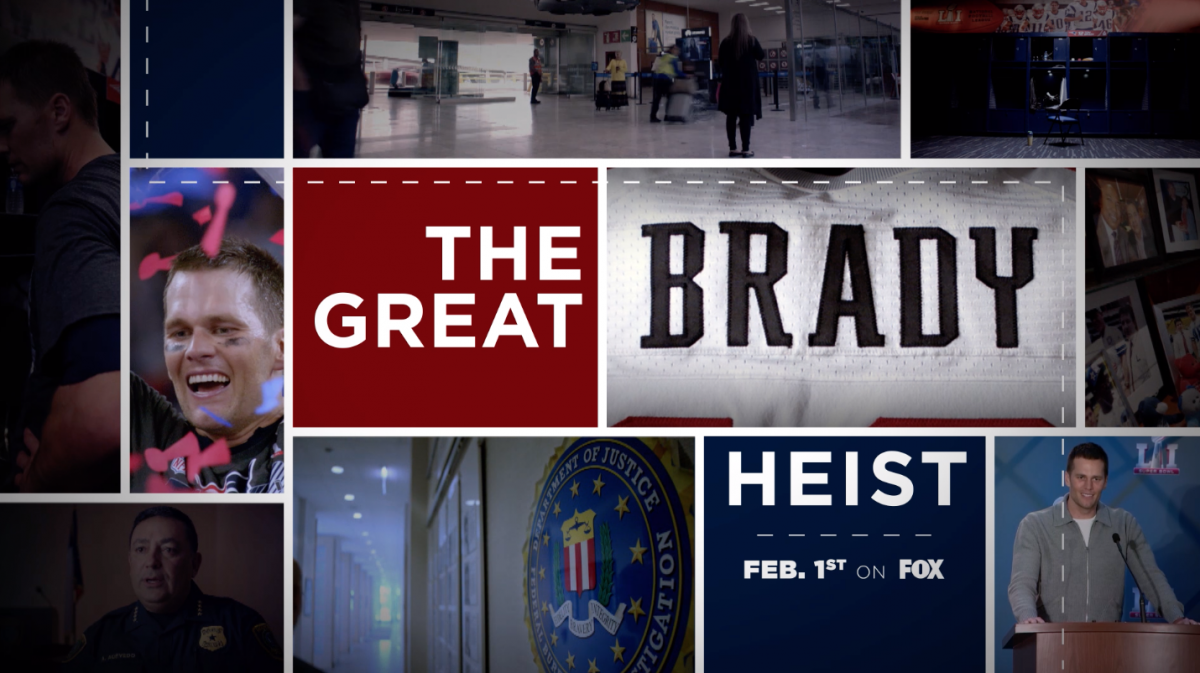 LOS ANGELES, CA – FOX Sports Films today announced “The Great Brady Heist” as the newest film in its MAGNIFY series. Produced by NFL Films, in association with Gotham Chopra’s Religion of Sports, the documentary chronicles the disappearance of Tom Brady’s jersey following the New England Patriots’ improbable Super Bowl LI comeback win over the Atlanta Falcons. Through never-before-seen FOX Sports footage, exclusive conversations with Brady, the first ever on-camera interview with the man who stole the jersey and other behind-the-scenes moments, the film looks intricately at the investigation as well as the boundaries of fandom and redemption.

“As the game’s broadcaster, FOX Sports played a role in so many elements of this story, so it made sense for us, with the help of NFL Films and Religion of Sports, to take a closer look and see it through,” said Charlie Dixon, Executive Vice President of Content, FOX Sports. “The Great Brady Heist is the fulfillment of a three-year journey that’s captivated us from the beginning, and the film’s Super Bowl weekend debut makes it particularly special.”

After the Super Bowl LI broadcast on FOX, the company’s extensive camera coverage played a key role in the investigation, and FOX Sports NFL Insider, Jay Glazer subsequently broke an early exclusive follow-up story on FS1, laying the path for the film.

“Just when you think you’ve seen it all in the sports world, a story like this comes around,” said Ross Ketover, Chief Executive, NFL Films.  “Anyone who thinks they know what happened that day will discover more jaw-dropping details than they could have imagined. ‘The Great Brady Heist’ is one of the most unique projects NFL Films has ever produced.  We couldn’t be more pleased to partner with FOX and Religion of Sports on such an engaging film.”

“Sports are mythic. We invest so much of ourselves as fans in our favorite teams and players. This is a tale about that – what a singular jersey means beyond the threads it’s made of and the number on the back,” said Gotham Chopra, Co-Founder, Religion of Sports. “Why did multiple federal agencies and countless high-powered individuals all become a part of this hunt for Tom’s jersey? Because sports matter and are about so much more than wins and losses.”

FOX Sports Films’ MAGNIFY series aims to bring a deep focus to untold sports stories. Featuring both legends and unknown heroes, these films provide a unique perspective and deeper connection to the sports we love. “The Great Brady Heist” is the sixth MAGNIFY film (“89 Blocks,” “Shot in the Dark,” “Nossa Chape,” “They Fight” and “Q Ball”). The series, which launched in November 2017, has garnered two Sports Emmy Award nominations for “Outstanding Long Sports Documentary” (“Shot in the Dark,” “89 Blocks”).

About Religion of Sports
Religion of Sports is a Sports Emmy-award winning Sports Media Content company co-founded by Tom Brady, Michael Strahan and Gotham Chopra (CCO) and also guided by Ameeth Sankaran (CEO).  The company produces content ranging from short form video to podcast to feature films that answer the core question “Why Sports Matter”.  Content includes its flagship Religion of Sports series, Shut Up & Dribble on Showtime, the Emmy-winning docu-series Tom vs. Time with Tom Brady for Facebook Watch, Stephen vs The Game with Steph Curry also for Facebook Watch, and most recently Headstrong: Mental Health in Sports for NBC Sports. www.religionofsports.com

About NFL Films
Winner of 129 Sports Emmy® Awards, NFL Films maintains a legacy of unprecedented access and legendary storytelling. Established in 1962 by Ed and Steve Sabol, NFL Films revolutionized the way sports are presented. Through the introduction of cinematic devices such as slow-motion cinematography and orchestral scores, the Sabols provided fans with a view of professional football through a completely different lens.  Today, NFL Films continues to be a leader and innovator in sports television.  Current productions include A Football Life on NFL Network, Hard Knocks on HBO, All or Nothing on Amazon, Inside the NFL on Showtime, and the flagship magazine show, NFL Films Presents on FS1. NFL Films is a part of NFL Media, the owned and operated media division of the National Football League, which is comprised of NFL Network, NFL Films, the NFL App, NFL.com and NFL RedZone. 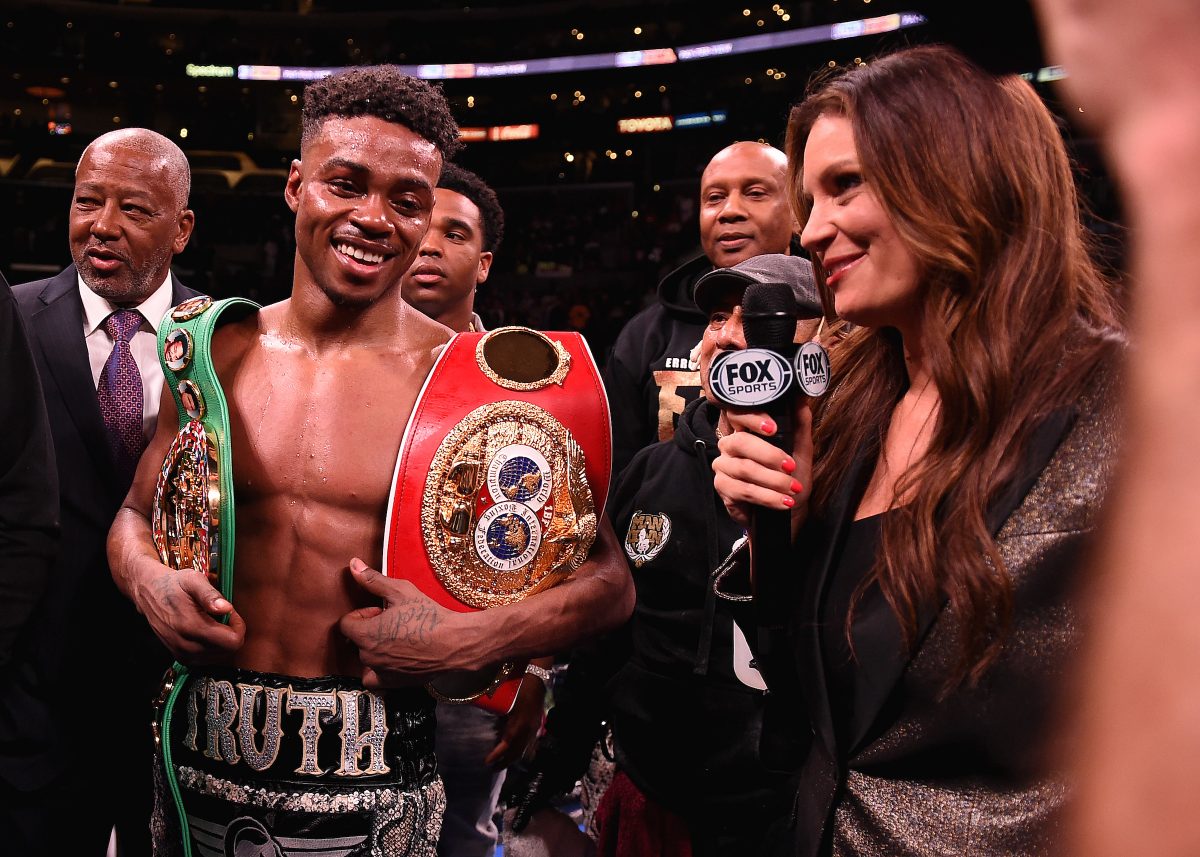 LOS ANGELES – Today, FOX Sports announces Unified Welterweight Champion Errol “The Truth” Spence Jr. will have an interview during the broadcast of FOX PBC FIGHT NIGHT: TONY HARRISON VS. JERMELL CHARLO II live on FOX Saturday, Dec. 21 (8:00 PM ET). This will mark the first interview that Spence Jr. has made since his horrific car accident that took place on October 10, 2019. 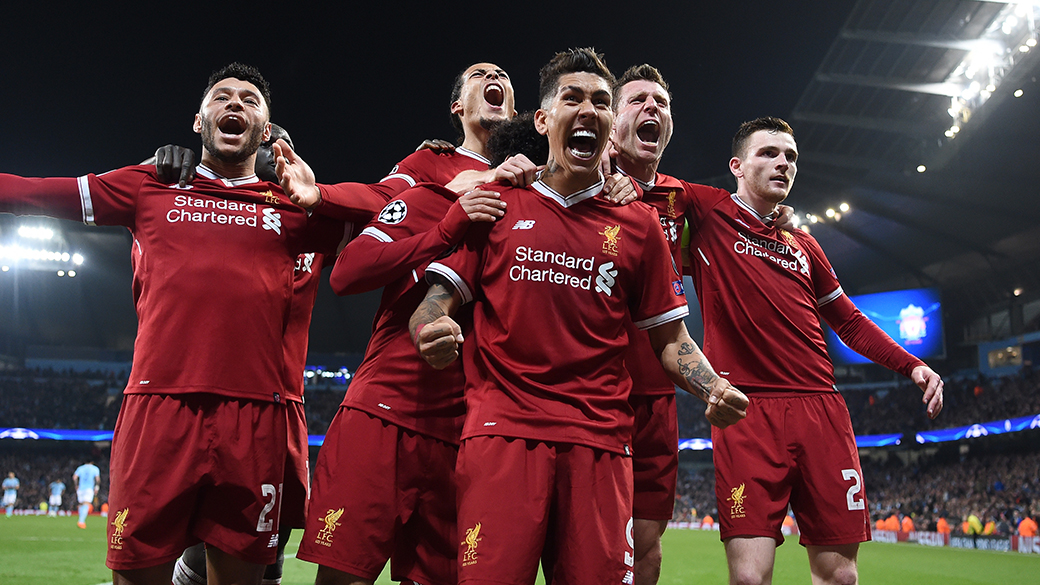 Match is preceded by Monterrey vs. Al-Hilal for Third Place

Los Angeles – FOX Deportes airs the FIFA Club World Cup final between Liverpool and Flamengo live from Doha, Qatar on Saturday, December 21 at 12:30 PM ET. Prior to the final, Mexico’s Monterrey faces Al-Hilal for Third Place at 9:30 AM ET.

The 16th edition of the tournament crowns the world’s top club and features all six confederation champions.

Liverpool, the European champions and current English Premier League leaders, defeated Monterrey 2-1 on a last-minute goal by Mohammed Salah to advance to the final. Flamengo, the Brazilian South American champions, defeated Al-Hilal 3-1 to reach the final.

Following its participation in Qatar, Monterrey takes on Club America in the 2019 Torneo Apertura final in Mexico. FOX Deportes exclusively airs the final’s first leg on December 26 live from the Estadio BBVA Bancomer in Monterrey. 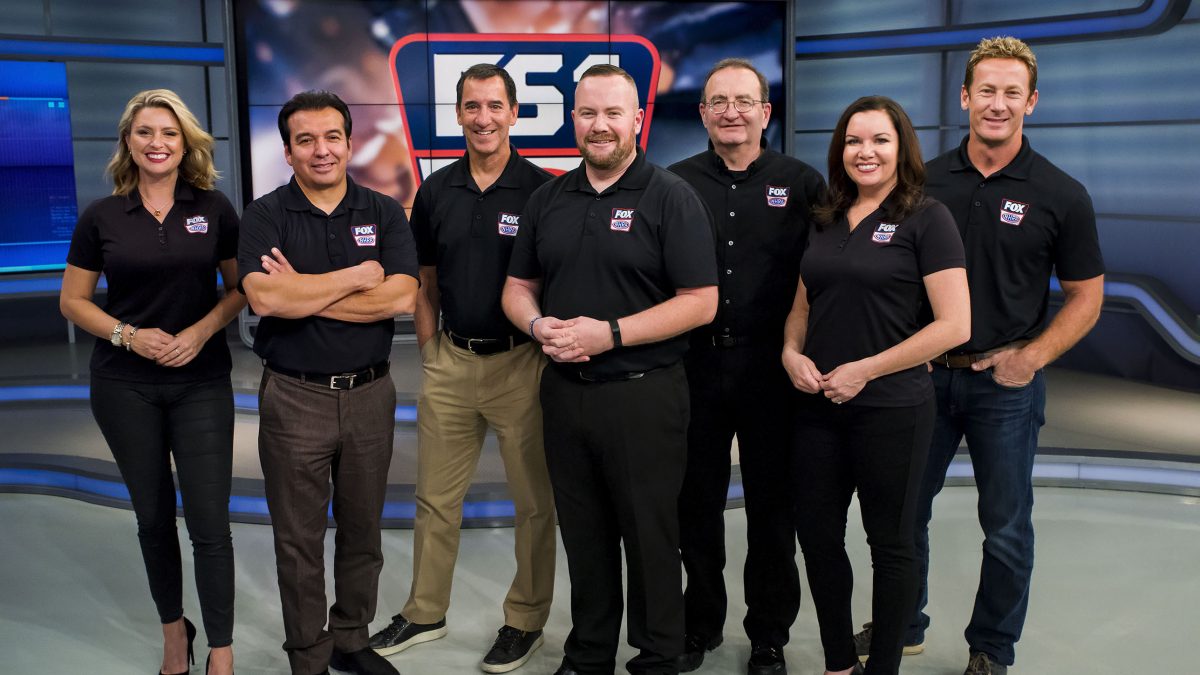 The 2020 season also marks the 50th anniversary of the NHRA Pro Stock Division.

“The 2020 season really gives us a magical opportunity to revel in the history of NHRA Pro Stock drag racing,” said FOX NHRA play-by-play announcer Brian Lohnes. “This class, that kind of burst its way out of the Sportsman ranks, has captivated fans with razor-thin margins of victory since the 1970 NHRA Winternationals. We’re going to have a load of fun celebrating the history of Pro Stock in 2020 and honoring the legends who built the class from the ground up.”

NHRA races will appear in Canada and the Caribbean through FOX Sports Racing, as well as through the FOX Sports app.