The Bundesliga broadcast schedule and talent assignments can be found attached and here.

I’m U.S.-born and Scotland-bred, but my love for the game came into full-bloom in Germany, as a defender for the mighty St. Pauli FC from 2005-2008. The tattoo covering my upper back is a tribute to the club that’s like family to me – one of the most progressive and passionate organizations in all of European soccer. I know that’s prime body real estate, but I owe it to them.

After retiring as a player in 2010, I now cover the Bundesliga, Germany’s top-flight, for FOX Sports. This league has everything – audacious play-making, fantastic goals and amazing personality from the field to the stands. I love it with all my soul, and I try to bring the same obsessive energy to my craft now that I would’ve on the training ground, fighting for a spot in the team. Everyone at the Bundesliga and FOX behind-the-scenes that’s committed to growing the league (in its 56th season) deserves that, as do the viewers – whether they’ve always loved it or are just growing into it.

So, every week, I’m on-set with Kate Abdo, unquestionably one of the best in the game, and a cast of other teammates throughout the season. Jovan Kirovski, the only American player ever to win the UEFA Champions League title, Warren Barton, Alexi Lalas, Stu Holden (not a bad crew ex-pros for your next small-sided game) and others join us at our studio, affectionately known as the “Beer Cellar.” We’re typically there at insane west coast hours to bring you the action (be sure to check my 4:30 a.m. Instagram arrivals during the season) and dissect every inch of the games’ tactics and key storylines. Just as importantly, we try to have a little fun while we’re at it. 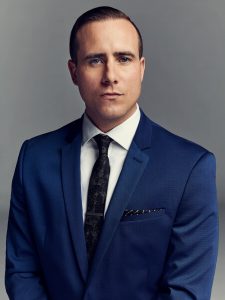 So, here are some key reasons why you should join the fun for one (well, more than one) of the nearly 175 Bundesliga matches we’ll show on TV over the next nine months:

For starters, if you want to see the future of our U.S. Men’s National team, on their earliest stretch of the road toward Qatar 2022, you’ll find it right here. There are 11 Americans in the league and 7 of them are under the age of 25.

The name on the marquee in big bright lights, of course, is Borussia Dortmund’s 19-year-old Christian Pulisic — a great bet to wear the captain’s armband full-time for the Stars and Stripes someday soon. I was lucky enough to call Dortmund’s 4-1 season-opening win, roaring back after conceding a shocking goal in the opening minute.

Pulisic is dynamically skilled, confident and as promising as any player that’s ever come from the U.S. He’s also proven his ability to play regularly, score and create goals at the highest level. And I think even he would tell you that last season for the “Black and Yellow” left him wanting more. He’s got something to prove this season, and the club have brought in reinforcements, signing five new players (including Axel Witsel who’s on-form early, with flair) and a brand new manager, Lucien Favre to improve on last season’s fourth-place finish. I spent some time with the club this offseason for more insight into how they intend to do it. I see this as a very important season for both Dortmund as a team and Pulisic as a player.

Josh Sargent who ran rampant in the U-17 and U-20 World Cups for the U.S. in 2017, turned 18 earlier this year and signed his first pro contract. Sargent is an incredibly-skilled yet still-slightly-raw project and potential star in the making. He was reported to be the first one on the scene for training at his club Werder Bremen this summer, which is just the type of dedication he’ll need. We’ll be keeping our eye on his progress this season as he competes for first-team minutes. He scored twice in this summer’s preseason action, which hopefully shows he’s on his way, and also tallied a goal this weekend for Werder Bremen’s reserve team.

Then there’s Texas native, Weston McKennie, who looks primed to be a really special player. He impressed in the U.S. National Team friendlies this summer and has already showed much promise for his club, helping Schalke 04 to a surprising second-place finish last season and a spot in this season’s UEFA Champions League. As a 19-year-old, he looks more than capable of handling the adult workload required of a full-time professional, and with some players departing in the offseason, he’s ready to feature even more prominently in a key central midfield role this season.

Schalke got off to a rocky start losing 2-1 in a wild and chippy match at VFL Wolfsburg this weekend, playing down a man due to VAR-assisted red card. Some experts, including myself, have them pegged to challenge for the top four again.

We’ve also got some veteran U.S. names to highlight. John Brooks is back for Wolfsburg, figuring heavily in this weekend’s aforementioned win against Schalke — scoring the opening header from corner and then also giving up a penalty. Last season, Brooks garnered the most expensive transfer fee ever for an American player when he moved from Hertha Berlin and was then injured much of the season before returning just in-time to keep Wolfsburg from dropping out of the Bundesliga. He helped will his team to a relegation playoff win in that instance, and I think, if he remains healthy, he’ll anchor this back line with strength and smarts to get Wolfsburg closer to the top half of the league at season’s end. And farther down the road, with top form and good health, he may also lead the U.S. to Qatar 2022.

Another familiar name for US National team fans is Bobby Wood, who’s getting second life at Hannover after scoring two goals for his previous club Hamburg last season. Hamburg were relegated and now Wood has a chance to bounce back and show that he not only belongs in this top-flight league but can continue to figure prominently into the U.S. team plans for the future. 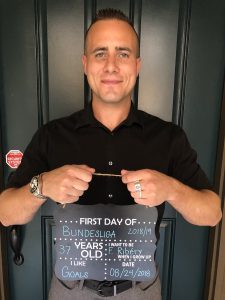 From the management perspective, we also have two young U.S. coaches, with big opportunities plying their trade in the Bundesliga. Steve Cherundolo who played in two World Cups for the U.S. is now an assistant at Stuttgart and Jesse Marsch recently left MLS’ New York Red Bulls to join RB Leipzig. Gaining an outside international perspective to learn from the global game adds a new flair to how we teach the game here in the U.S. Seeing these opportunities come to fruition for young, bright American tacticians is a great sign of growth, in my opinion.

Finally, from the up-and-comers to one they’re all chasing. The six-time reigning, defending champion/elephant in the room: Can ANYONE (…anyone?) stop the mighty Bayern Munich??? I truly don’t know, but spent some time with them this summer trying to find out, and you’ll see some of those conversations during the season.

Frighteningly enough, a number of Bayern players have something to prove after disappointing World Cups – Robert Lewandowksi (Poland), James Rodriguez (Colombia) and Joshua Kimmich (Germany) to name a few. We saw Lewandowski start to take out some of that frustration via hat trick in the unofficial start to the season, a 5-0 win over Eintracht Frankfurt in the SuperCup Final, August 12.

This team is comically stacked and will likely make a Champions League run as they do most years. They certainly looked the part, opening the regular season Friday against Hoffenheim and stylish 31-year old manager, Julian Nagelsmann. Bayern teased us a bit, going into halftime 1-1 before turning on the style and winning 3-1. They also have a new manager, Niko Kovac who has a point to make in his quest to become one of the world’s best head coaches. I can’t wait to see how far they go and, just as importantly, who’s up for the challenge…

Being a player is an irreplaceable sensation, but I’m ecstatic to be on this side of it, with great people, doing what I love and still connected to the game. Seeing the supporter flags flying high and flares blazing in the stands again this past weekend – as a backdrop to the game being played at the highest level – was still a thrill after all these years.

The Bundesliga has captured my heart, and I hope it’ll do the same for you. Wake up early, come grab a beer and meet us at the cellar.