NEW YORK – FOX Sports, last year’s leader in live events, today deepens its footprint with the release of its highest quality college football schedule to date with 136 games on the FOX broadcast network, FS1, FOX Sports Regional Networks and BTN. This fall, FOX Sports owns the weekend with an impressive lineup featuring top games from the Big 12, Big Ten and Pac-12 conferences, including some of the season’s most notable games like Michigan at Ohio State, USC at Texas and the Red River Showdown between Texas and Oklahoma, plus the Pac-12 and Big Ten championship games. 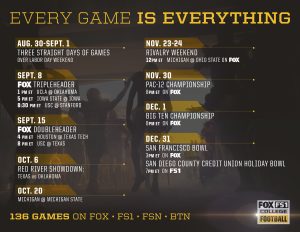 “We are excited to present what we think is going to be our best season of college football yet,” said FOX Sports President, Production and Executive Producer John Entz. “From the nation’s best rivalries like Michigan-Ohio State and the Red River Showdown, to a pair of conference championships that are sure to influence the postseason conversation, FOX College Football televises some of the most meaningful games of the season, and we’re already looking forward to the first snap.”

One year after registering as FOX Sports’ most-watched regular-season college football game ever, the sport’s most historic matchup returns to the FOX broadcast network during “Rivalry Week” when Michigan makes its way to The Horseshoe on Saturday, Nov. 24 to face Ohio State with coverage beginning at 11:00 AM ET. The 115th meeting of “The Game” highlights a prominent weekend for FOX Sports, which begins with an NFL showdown between the Washington Redskins and Dallas Cowboys on Thanksgiving Day, followed by Nebraska at Iowa in the Heroes Game, and in-state showdowns between Washington and Washington State and Oregon at Oregon State on Friday, Nov. 23.

After last season’s fitting rematch of the 2006 BCS National Championship Game between USC and Texas, which saw the Trojans triumph in a double-overtime thriller with former USC quarterback and FOX College Football analyst Matt Leinart getting in on the action, the renewed rivalry once again calls FOX Sports home. On Saturday, Sept. 15, at 8:00 PM ET on FOX, USC heads into Big 12 territory to face Texas in Austin for the first time since 1966.

In the heart of the State Fair of Texas, and amidst FOX Sports’ MLB Postseason coverage, the Red River Showdown returns to the FOX Sports family of networks for the second time and first since 2016 – a matchup that still ranks as FS1’s second most-watched college football game ever. Following the departure of Heisman Trophy winner Baker Mayfield, the Oklahoma Sooners look to extend their current winning streak against the Longhorns on Saturday, Oct. 6, at Cotton Bowl Stadium in Dallas. The following day, football fans won’t need to venture further for another round of hotly contested gridiron action, as the Minnesota Vikings face the Super Bowl Champion Philadelphia Eagles in an NFC Championship Game rematch during AMERICA’S GAME OF THE WEEK on Sunday, Oct. 7.

This year the Pac-12 returns to Levi’s Stadium in Santa Clara, Calif., on Friday, Nov. 30 for the conference’s championship game, while the Big Ten Championship is back home again in Indiana at Indianapolis’ Lucas Oil Stadium on Saturday, Dec. 1. FOX Sports closes out the season and the calendar year on Monday, Dec. 31 with back-to-back bowl games, beginning with coverage of the San Francisco Bowl at 2:30 PM ET on the FOX broadcast network and the San Diego County Credit Union Holiday Bowl at 6:30 PM ET on FS1.

Other top games include:

Games are simulcast on the FOX Sports app, which now provides live streaming video of FOX Sports content through iOS and Android devices.

The 2018 college football schedule for FOX, FS1, FOX Sports Regional Networks and BTN is attached. The remainder of the schedule will be announced as the season progresses.

FOX Sports Primed to Own the Weekend with Addition of Loaded College Football Schedule (449 kB, last updated May 2018)