Did the Browns accidentally reveal their free agent 'big board', or was it simply a false alarm?

It was the screenshot talked about ’round Northeast Ohio — except there’s about a 98 percent chance it wasn’t a big deal at all.

As new Browns general manager Ray Farmer entered the media center to introduce the team’s new free agents on Wednesday afternoon, someone got a picture. That picture showed a white board in the background with names of free agents and their 2013 teams, and it started making its online rounds as a list of the team’s potential free agent targets.

This is the state of the Cleveland Browns. Anything’s possible. Everything is believable.

The truth is this: Farmer entered the press conference room through the team’s non-football video edit suite. That’s the room where team website and in-house television shows, segments and interviews are produced. Names on that white board were simply names of potential free agents of interest so that those people who make the videos — read: not the people who make the football decisions — could be prepared with highlights if any of those players signed with the Browns.

As someone who worked in that building and in that realm for nearly a decade, I can say with certainty that news involving free-agent signings or even just interest often trickles outside the building before it filters downstairs or around it. The "war room" and any other room where meetings would be held or information would be stored is upstairs, safe and secured from the plebeians.

People who work on the team’s website would see the same tweets, read the same articles and have access to same free-agent lists and any fan at home would. Ideally, these people would also know a little about football and the league and the process of this stuff, so a list on a whiteboard of top free agents or potential targets would be used in their pre-free agency meetings, which differ greatly from the ones that go on upstairs.

Upstairs, the goal is to get the player in the building and to the roster. In the edit suite, the job is to make the consumers and web-clickers believe that player is the one that’s going to tilt the Super Bowl axis.

(As I write this, the 49ers PR deparment just sent out a press release with a link to an interview with their new safety, Antonie Bethea, and B-roll of Bethea playing with his old team, for stations and websites to pursue if they want. Here’s a bet that in Santa Clara, there were names on a white board).

If a name was crossed out, circled, highlighted or somehow otherwise made to stand out from the others on that Browns board, chances are it’s because footage of that person wasn’t yet secured. Maybe there wasn’t a lot available. Maybe it was already downloaded to a certain system. It’s not supposed to be rocket science.

Now, could the list compiled "downstairs" have been run by someone upstairs to give a nod in one direction or another? Sure. Is there a chance some names on that list were educated guesses? Yes. But they were still just names on a list, names any GM across the league — or any fan in Brecksville or Boise — could have written anywhere.

Twenty-six hours into free agency, it wouldn’t matter. The negotiating period began five days ago. The Browns apparently had deals with Karlos Dansby and Donte Whitner done before the real stuff even started. There wasn’t going to be any white board in any 8×15 edit suite that was going to change that.

I love to tell old Browns stories on Twitter (you may have noticed).

If you’ve read any of them or just followed the organization in general, you know there was plenty of high-level stupidity that went on inside those walls that didn’t involve the high-level botching of the football operation.

For example, in 2006 the start of free agency came at midnight on a Friday (so, technically, 12:01 a.m. Saturday). We had met throughout that week — "we" being the web staff and a couple of bosses — about players the Browns might pursue, what we could have done in advance in case news broke, being available through the weekend and strange hours, etc. Part of these discussions were the league’s tampering rules and how we needed to take extra caution as a site not to share any information or put the team in any kind of bad light.

It should have been basic stuff.

It was the Browns.

Before leaving the office that Friday, I had submitted "quick" stories — five or six paragraphs, facts and stats only — on the Browns potentially signing free agent wide receiver David Givens and punter Dave Zastudil, both of whom had ties to members of the Browns coaching and/or personnel staffs. These stories were e-mailed by me to my boss, and per previous discussions he knew just to keep them in a file and not let them anywhere near our computer system.

Well, this boss thought he was really smart, really slick and super important. And in a super slick lapse of judgment, he put these stories into our admin system with a postdate and future time, meaning they shouldn’t have shown up in our newsroom, front page or anywhere else.

Someone found them. They were there, in plain view, on ClevelandBrowns.com. 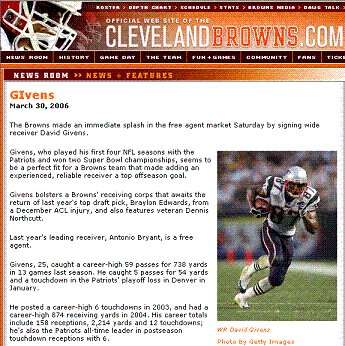 I was at home in my living room, and I believe I was playing poker with some friends. When my phone rang about 12:45 a.m. from the office number of a pretty high-ranking "upstairs" official, I admit I was initially feeling pretty slick myself and thinking I was about to get some inside information.

Instead, I saw my job flashing before my eyes. People were calling. The Patriots, in fact, were calling, because some guy had posted something written by the lowest-ranking member of the whole organization on the team’s official website. To make matters worse, my guess had been wrong. The Browns didn’t even call Givens.

I wasn’t tampering. I was playing poker. I wouldn’t have known David Givens from a pair of sixes.

When you work for a team website, your No. 1 goal is to never, ever end up on Pro Football Talk.

To make a long story short, the team’s PR department officially claimed a hack had taken place. Pro Football Talk called that bluff but eventually had better things to write about. We all got lectures, and we all knew what had happened. We took the names then-coach Romeo Crennel called us the only way we could, with our heads down. I was calling that boss guy who’d put us in that spot even worse.

It didn’t happen again. I worked for the Browns for almost four more years following that, which makes me qualified to say it’s not worth sweating that white board and the innocent writing on it from today.

It’s just a list of any names on a board downstairs. Any schmuck could have put it together.