As our city hosted the MLB All-Star Game, we seized the opportunity to engage Indians fans on social media with unique and exclusive coverage of the week-long event and the high-profile people it brought to town. Our social media All-Star coverage included over 250 posts, including 33 pieces of content, that generated over 260,000 engagements. It included a bracket-style poll where fans voted on Indians Top 25 Moments (which was a linear show), social-only feature throwing back to Sandy Alomar’s 1997 All-Star performance, an All-Stars on a deserted island bit, celebrities talking about Cleveland, raw Instagram and Facebook stories giving an inside look at the events, celebratory graphics and more.

Fans voted on Twitter for the Top Progressive Field Moment to accompany our linear show. The winner from each round advanced to the next. Until fans ultimately picked a winner.

What’s the best moment of the 25 years at Progressive Field?

We begin our fan voting today with four Round 1 matchups. Follow the thread below to cast your vote for each. pic.twitter.com/JftZdLvH64 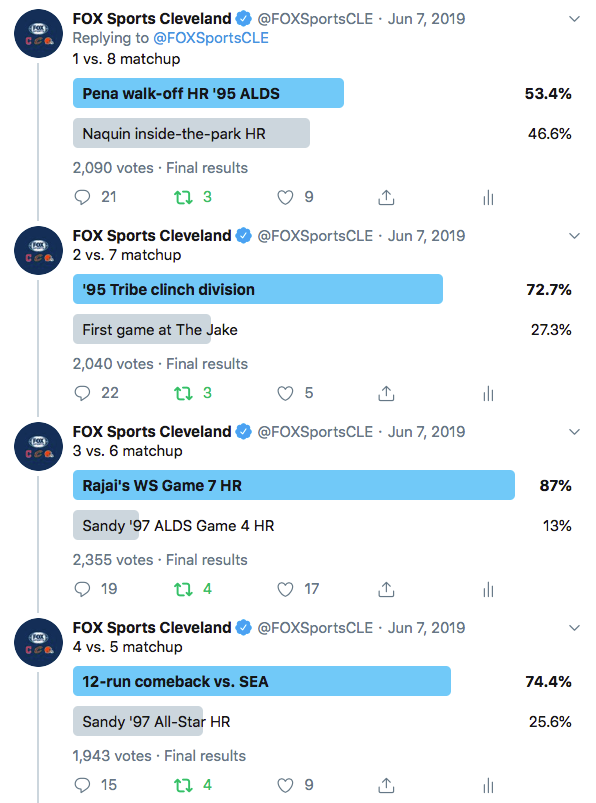 Follow the thread below to cast your votes in the semifinal matchups ⬇️ pic.twitter.com/EL3i0oJlzq

Down to the Final Two in our Progressive Field Best Moment Twitter fan vote!

Choose your winner in the poll ⬇️ pic.twitter.com/rqZpsgfRfa

Sandy Alomar sat down with us to talk about his legendary 1997 All-Star Game performance.

Which MLB All-Star would you most like to be stranded on a deserted island with?

“Just in case I have to fight a bear, I feel like Max could go into whatever he does on the mound & tear a bear apart.”
– @Rockies‘ @Chuck_Nazty on @Max_Scherzer

That, & more, as @Shannon__Ford asked the @MLB All-Stars which All-Star they’d want to be stranded on an island with. pic.twitter.com/eFv6K8MwZ1

What does Cleveland Against the World mean to you? We asked celebrity Cleveland natives what it meant to them ahead of the Celebrity All-Star Game.

What does Cleveland Against The World mean to YOU?

“I love this city to death, everyone knows it.”

.@JennieFinch is no stranger to winning it all for the 🇺🇸!

The @USASoftball 2004 Olympic 🥇 medalist was pumped to see the @USWNT win its second straight #FIFAWWC pic.twitter.com/ETGOjBjhGh