There was every reason to doubt Minnesota in its season finale against Auburn in the Outback Bowl.

The Gophers had lost two of their last three games – both defeats to ranked teams, and, in case you forgot, the Tigers entered the contest ranked No. 9 in the Associated Press top-25 poll – and saw their offensive coordinator leave the program less than a week before their bowl game.

Instead, all Minnesota did was dominate its opponent from the SEC, withstanding several punches from Auburn while delivering a knockout blow of its own in a 31-24 victory, the program’s 11th of the season.

An entertaining first half saw the Gophers take a 24-17 lead, despite Tanner Morgan throwing an interception on Minnesota’s first series and Auburn returning a kick for a touchdown after the Gophers tied the game at 3 in the first quarter. But the Gophers never wilted.

While the score might have been close after two quarters, it was the Gophers who were dominating. Minnesota had the ball for 20:45 in the first half. Auburn ran just 22 plays – the Gophers had 10 chunk plays (passes of 15+ yards, runs of 10+ yards) alone.

The second half didn’t have as much scoring, but other than one long, game-tying drive by Auburn in the third quarter, it was the Gophers who once again in control of things.

The Auburn defense had little answer for the Minnesota offense. The Gophers racked up 494 yards of total offense compared to just 232 for Auburn (Minnesota nearly had as many rushing yards, 215, as the Tigers had total yards).

After that early interception, Auburn had little answers to stop Morgan and even fewer in trying to contain wide receiver Tyler Johnson, who had two touchdowns, including the go-ahead score. And in the end, as Minnesota salted away the game, the Tigers could do nothing to stop running back Mohamed Ibrahim.

It was a great season for Minnesota which was punctuated at the end by some uncertainty. But the finale, this Outback Bowl, put an exclamation point on a memorable, and now unforgettable, year.

Here’s a recap of Wednesday’s game:

Senior wide receiver Tyler Johnson went out in style. He set Minnesota bowl game records with 12 catches for 204 yards (the previous highs were eight and 149) and scored two touchdowns, both big ones. His leaping grab at the end of the first half put the Gophers up 24-17. Then in the fourth quarter with the game tied, on the first play after an Auburn punt, Johnson was wide open on a play-fake to Rodney Smith. With Morgan hitting him down the seam, Johnson ran the rest of the way for a 73-yard touchdown, the final points of the contest. The scores were Johnson’s 32nd and 33rd receiving touchdowns at Minnesota, which put him atop the Gophers all-time list all by his lonesome, breaking a tie with Ron Johnson. In addition, the 204 yards were a career high and the most for a Gophers receiver since at least 2000 (he topped Rashod Bateman’s season high by one) and the 12 catches were the most since Eric Decker had 13 on Oct. 4, 2008. What a way to go out. Enjoy the NFL, Tyler.

Mohamed Ibrahim scored a touchdown early in the game, but it was his late running which helped seal the game for Minnesota. He rushed for 140 yards on 20 carries, but two in the fourth quarter stand out. With just over two minutes to play, the Gophers were facing a third-and-10 and Ibrahim got the 10 yards for a first down, keeping the clock moving. His next two carries were for four and seven yards – even though everyone knew he was getting the ball – the latter rush gave Minnesota its final first down and allowed the team to go into the victory formation. We also have to give Ibrahim credit for his 17-yard carry on a second-and-16 play in the second quarter. He also was used as a decoy on a touchdown which put Minnesota up 17-10. In the wildcat formation, quarterback Seth Green faked the handoff to Ibrahim, drawing the Auburn defense up and leaving tight end Bryce Witham open in the end zone for a TD reception. It was Witham’s first catch of the season and Green’s first pass. Give an assist to Ibrahim, who did more than his share in the win.

With time running out in first half and the ball at the Auburn 2-yard line, Minnesota rushed to the line – the Gophers were out of timeouts – and quarterback Tanner Morgan threw high to the back of the end zone. Wide receiver Tyler Johnson leapt and made an improbable one-handed catch. Even more improbably, he was able to get one foot inbounds despite seemingly being no room for him to do just that. It was a play that certainly will make all the highlight reels not just from this game but for the best plays of 2020.

How much did the Minnesota offense dominate Auburn’s defense? The Gophers controlled the ball for 37:25. Minnesota’s 215 rushing yards were the most allowed by the Tigers all season – the previous high was 187 against top-ranked LSU – and Auburn never sacked Morgan, just one of three games this season in which the Tigers didn’t record a sack. The Gophers’ 494 yards of offense was the second most in a bowl game in school history, behind just the 502 recorded in the 2000 MicronPC.com bowl against North Carolina State. In addition to Johnson’s above-mentioned records, Morgan had the most passing yards in a Gophers bowl game, 278, breaking the mark of 263 by Brian Caputo, who did it twice. 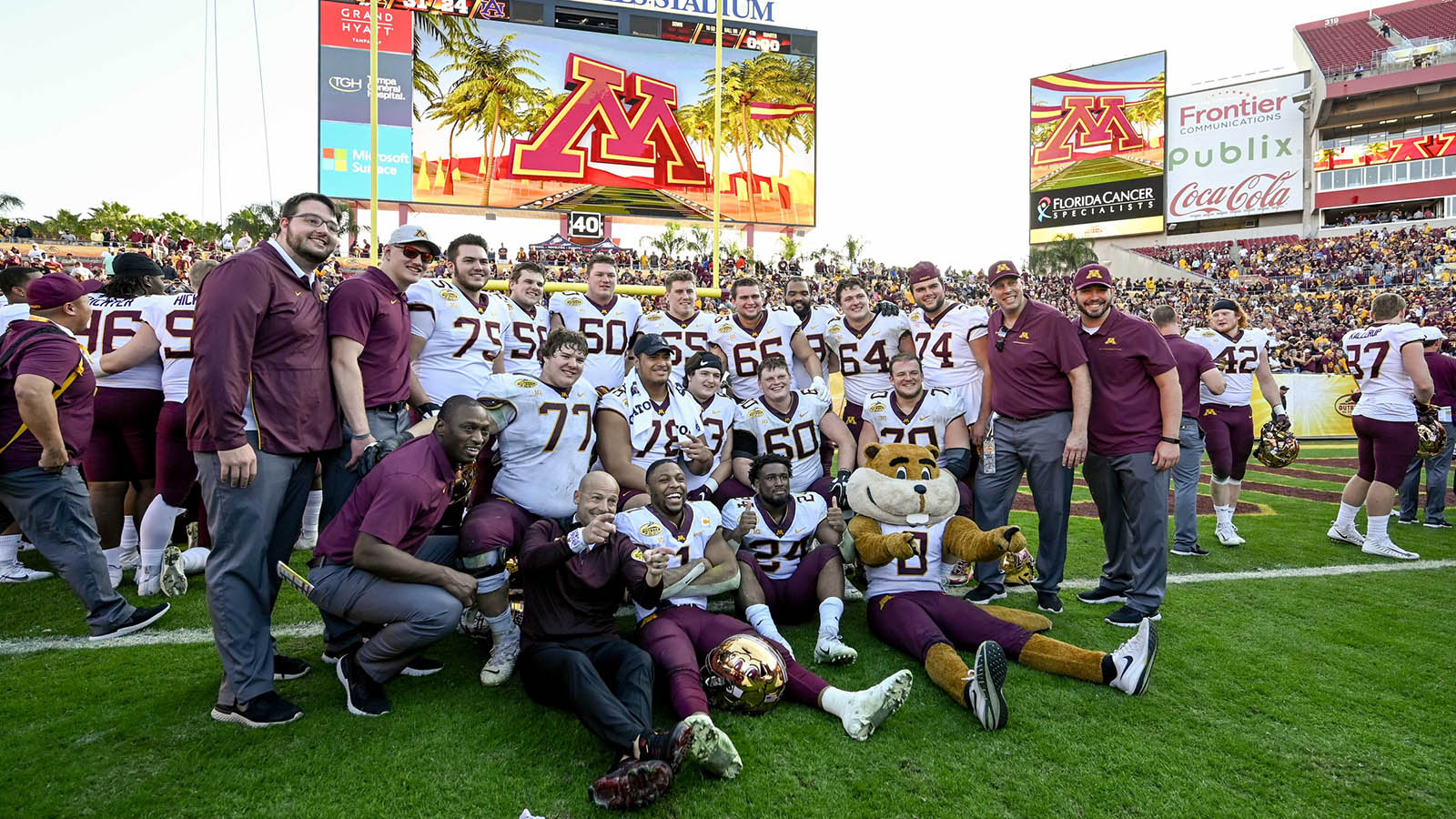 “He’s proven, whether it’s touchdowns, yards, catches, he’s the ultimate wide receiver here. I think this shows when young people make really smart decisions, well thought out, educated decisions of when to come back, this is an example. That’s one of the best teams in the country defensively. He just had 204 yards with two touchdowns, all right? He just showed what he can do with 12 catches against one of the best defenses in the country. We’re talking about getting him drafted, he showed that. Now we have a chance to show that.” — head coach P.J. Fleck on Tyler Johnson

“Yeah, coach (Matt) Simon saw something that he liked. Basically the offensive line, it was on them to get Tanner some time back there. They did their job with that. Then it was on me to create separation. The rest is history. I just knew when the ball was in the air I just wanted to still attack it because I didn’t know where the defender was. After I caught it, I wanted to explode to the end zone.” — Johnson on his 73-yard go-ahead touchdown

“We just wanted to go out and play our best; we didn’t end the season the way we wanted to and this was the next opportunity to play our best. We had a whole month to prepare for it and we came out and performed and got the numbers we could get.” — running back Mohamed Ibrahim

“He got his jersey a little dirty, but we’re prod that he came out of the game feeling fine. We love Tanner (Morgan). He is probably one of the best leaders that I have ever been around on a football field and it’s just amazing being able to play with him, so we take a lot of pride in being able to keep him healthy.” — offensive lineman Blake Andries