Upon Further Review: Yawn, another blowout as Gophers make mincemeat of Terrapins 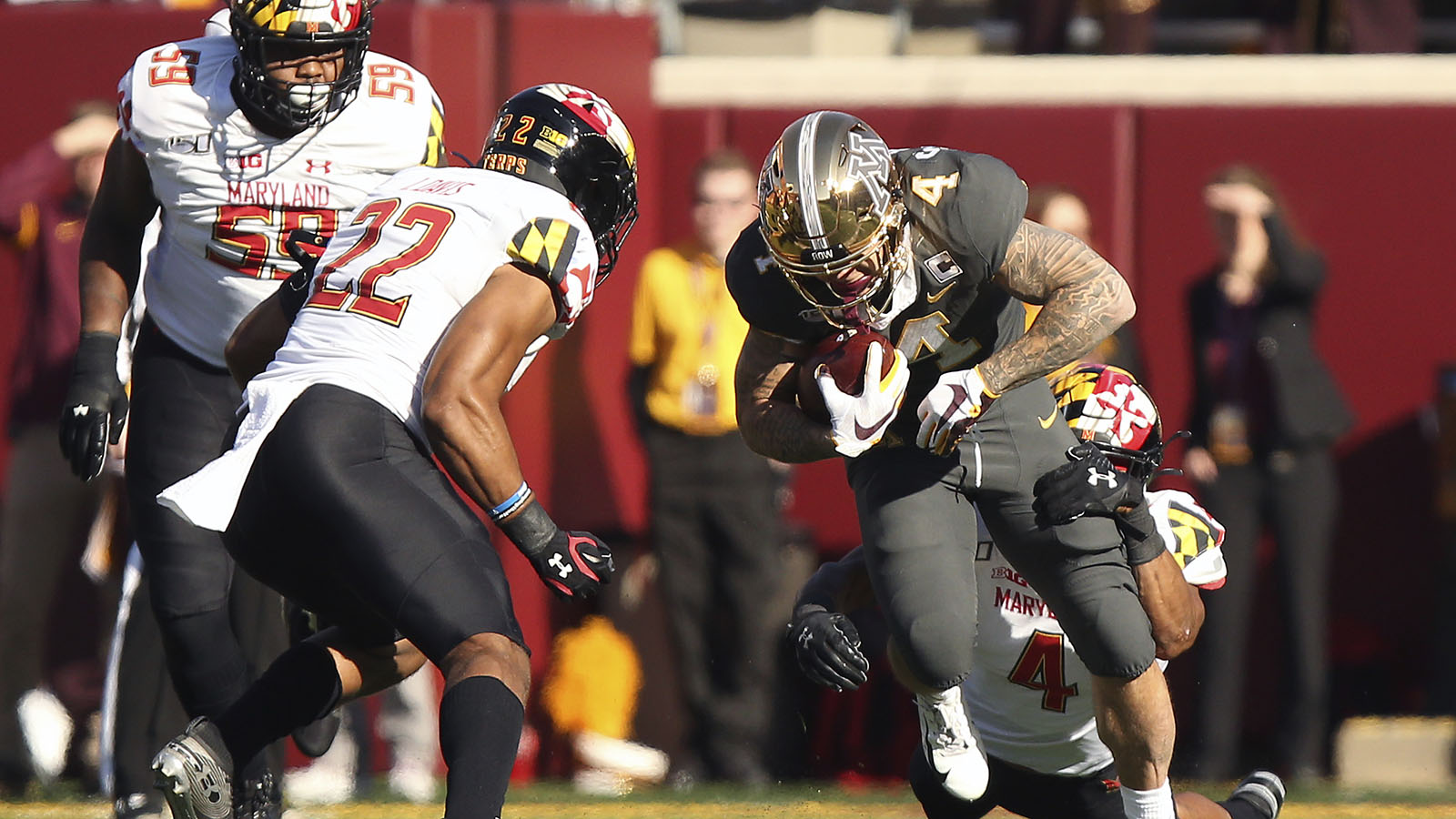 After four close wins to open the season – no victory by more than seven points – the Minnesota Gophers steamrolled their next four opponents.

The latest to get run over by Minnesota was Maryland. After wining games by scored of 40-17, 34-7 and 42-7, the Gophers scored the first four touchdowns and never looked back, crushing the Terrapins 52-10 at TCF Bank Stadium.

As can be expected by the margin of the final score, Minnesota dominated on both sides of the ball.

The Gophers compiled a season-high 498 yards of offense – their fifth straight game of 400+ yards – including 321 yards on the ground.

Defensively, Minnesota allowed only 210 yards, the fourth consecutive game the Gophers have allowed under 300 yards and the fifth time in the last six contests.

It all made for kind of a ho-hum, “here we go again” victory, one which allowed head coach P.J. Fleck to empty his bench and get a lot of backups some playing time.

The 8-0 Gophers face some stiffer competition in the coming weeks, but there’s nothing wrong with enjoying some relaxing wins.

Here’s a recap of Saturday’s game:

While Minnesota scored 52 points, no one really had big numbers. Running back Rodney Smith did top 100 yards rushing, barely though, with 103, his fifth straight game hitting triple figures. Smith did it on just 17 carries (6.1 average). In the third quarter when he scored on a one-yard plunge, Smith became Minnesota’s all-time leader in all-purpose yards, breaking Darrell Thompson’s 30-year-old record.

Congratulations @Numerouno1_ . You have more than earned the honor to hold the record. Keep on running!!! @GopherFootball https://t.co/koabTr4jv6

He doesn’t get in much and everyone pretty much knows he’ll be running with the ball, but Seth Green continues to have success in the wildcat (note: coming into Saturday, Green had just 12 carries, nine of those coming in two games; last season he had 76 carries). In the first quarter, he accounted for Minnesota’s second score with a 10-yard touchdown run. He got five more carries; the next three all picked up first downs, including one in which he got six yards on fourth-and-1. His last touch was a 1-yard TD run on fourth-and-goal.

It took all of two plays to figure out how this game might go. Maryland got the ball first and came out throwing. After completing a pass for seven yards, quarterback Tyrrell Pigrome’s pass was tipped by wide receiver Chigoziem Okonkwo, with Antoine Winfield Jr. “Johnny on the spot,” grabbing the deflection for his fifth interception of the season. The pick set the Gophers up at the Maryland 20. Minnesota would score four plays later on a Tanner Morgan nine-yard pass to Rashod Bateman. It wasn’t the last tipped pass which led to an interception for Minnesota as Coney Durr grabbed a pass off the hands of Dontay Demus in the third quarter and returned it 72 yards for a touchdown. Yup, it was that kind of day.

Durr’s touchdown, along with the extra point, accounted for Minnesota’s 28th point of the game. The Gophers have at least 28 points in all eight of their games this season, tying a mark set back in 1904, although that wasn’t done consecutively (by the way, this included a 146-0 win over Grinnell; the Gophers also topped 28 points – well, 107 and 75 – against high school teams that year). This was also Minnesota’s fifth straight Big Ten game with 30+ points. The Gophers have had only two conference streaks as long: six in 2003 and five in 1934 (although technically Minnesota is on a six-game streak, counting the final game of the 2018 season).

“Trap games, you want to look ahead, this team does not look ahead. Whether we would have lost or won tonight, they don’t look ahead. They’re not allowed to, our culture’s very strong, the four walls are really tight and found a way to get a win.” — head coach P.J. Fleck

“We have a lot of weapons across the board–a three-headed monster in the backfield, a lot of talented receivers, and we even had a pick-6 today. We can do it from any way and just continue to change our best and get better. It’s awesome to know how many weapons we have as a team.” — quarterback Tanner Morgan

“I think it set the tone of the game for us.” — Antoine Winfield Jr. on his interception

“Antoine just finds the ball. It’s crazy. The ball, he’s like a magnet. I don’t know, he’s just always around the football. It’s ridiculous. Two interceptions last week, one this week, it set us up offensively for success. To go down and score right away is huge.” — Morgan

As Week 8 ends, none of the eight teams Minnesota has faced on its schedule on its way to a perfect, so far, season has a winning record against FBS teams. That will change in two weeks. After taking next week off, the Gophers will face fellow unbeaten Penn State at TCF Bank Stadium on Nov. 9. The Nittany Lions, who are also off next Saturday. The Nittany Lions, coming off a 24-7 win over Michigan State have allowed more than 13 points just once – 21 to Michigan last week. It should be a pretty electric stadium.