MINNEAPOLIS — The Minnesota Vikings brought back little to show from a trip to one of the toughest places to play in the NFL. Other than additional injuries to important players and perhaps some pride in a fourth-quarter rally in Seattle that fell a bit short, that is.

There’s a reward waiting for them at home, though, with a depleted Detroit Lions team toting a five-game losing streak. The Vikings will make the playoffs if they win out, and the last quarter of the season presents an unprecedented advantage. All three NFC North foes must play this month at U.S. Bank Stadium, where the Vikings are 5-0 this year and 23-7 in the regular season and postseason since it opened in 2016.

Never before in team history have the Vikings had more than two intradivision home games stashed in the final four weeks of the schedule. The NFL first went to a divisional alignment in 1967.

“We need this one, and it’s going to be really important the last quarter of the season, now that we’re three-quarters of the way through, that we finish really strong,” quarterback Kirk Cousins said. “We’ve still got to go out and earn everything in front of us.”

Even with Lions quarterback Matthew Stafford likely to miss his fifth straight game to a back and hip injury, with undrafted rookie David Blough now manning the offense, the Vikings (8-4) ought not to relax about this game. The last time they played at home on Nov. 17, they fell behind 20-0 at halftime to a Denver team that’s now 4-8, before furiously rallying for a 27-23 victory. In the third game of the 2018 season, as a 16 1/2-point favorite at home against a Buffalo team that finished 6-10, the Vikings never even began a comeback and fell 27-6.

These Lions (3-8-1) have led in every game, and each of their losses during the streak have come by eight points or fewer.

Prior to Minnesota’s 42-30 win at Detroit on Oct. 20, the Lions lost by one point to Green Bay and by four points to Kansas City after leading both of those games with less than 30 seconds to go.

“They have highly paid, highly skilled players, and we barely beat them in Detroit. Barely,’ ‘ Cousins said. “You’d have to be pretty clueless to ever use the word ‘overlook’ in terms of getting ready for this one.”

Blough performed admirably in his debut on Thanksgiving Day, passing for 280 yards and two touchdowns and one late interception against a stout Chicago defense to give the Lions a spark.

“It was fun to see the guys have my back and lifting me up,” Blough said.

Here’s a closer look at the matchup on Sunday:

Kyle Rudolph, who has nine touchdown receptions in 15 career games against the Lions, has six scores plus a 2-point conversion in the last six games for the Vikings. Cousins has grown increasingly comfortable throwing passes into tight windows to the ninth-year tight end, who has made a habit of one-handed grabs in the back of the end zone.

“I take a lot of pride in trying to make the quarterback right,” Rudolph said. 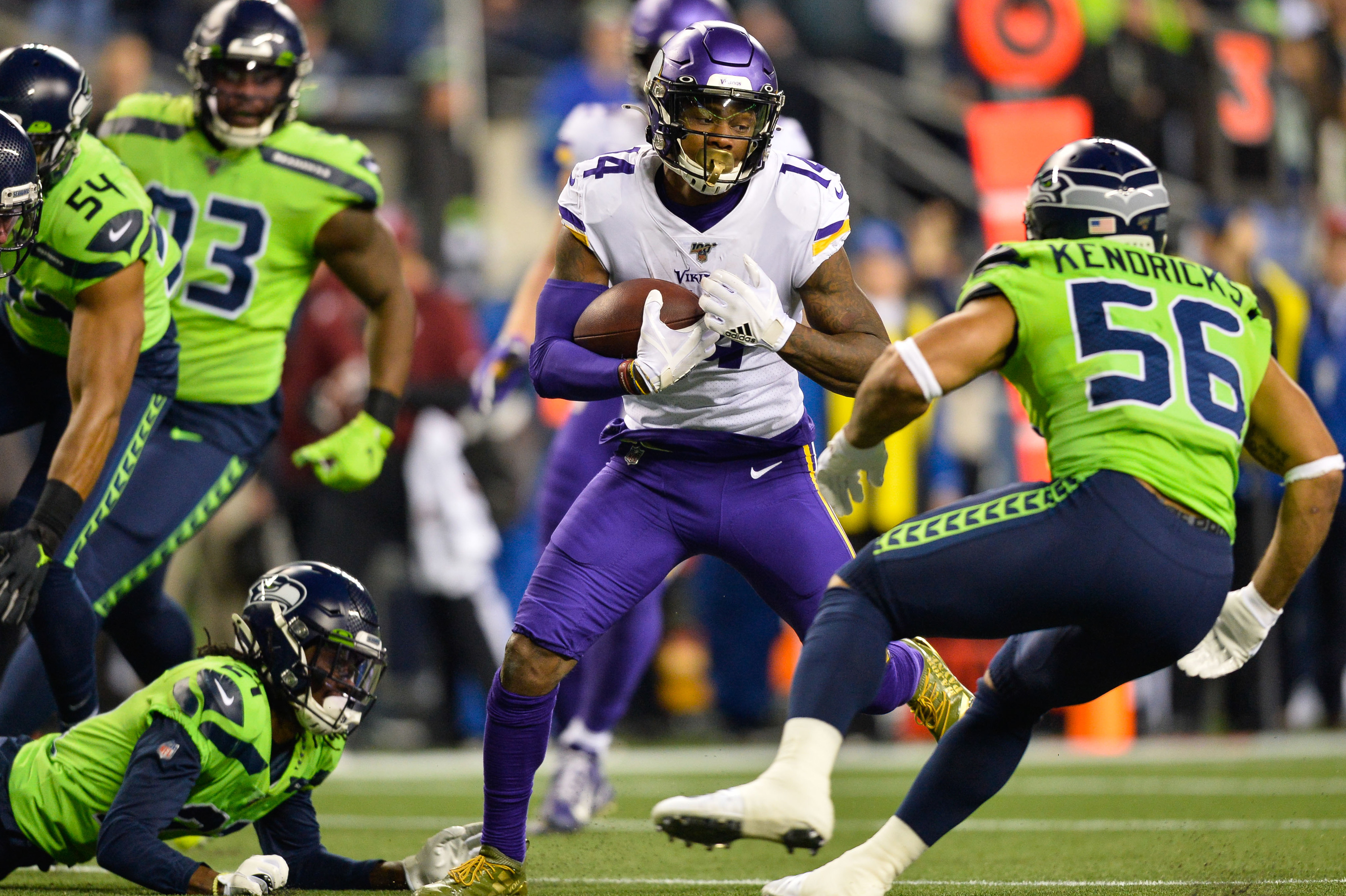 Hampered by a knee injury to starter Kerryon Johnson, the Lions have given carries to seven running backs this season. Johnson has returned to practice, but Bo Scarbrough has been a bright spot for the offense in the meantime.

“You can see him breaking tackles at the first level, breaking tackles at the second level. He can finish the run and kind of have that punishing style,” Lions offensive coordinator Darrell Bevell said. “I think he’s just kind of brought a little bit of the mentality that we’re looking for, the blue-collar guy, the physical, punishing style that you’d like to play in this division.”

The Vikings just got done playing against that punishing kind of style, and they didn’t fare well, allowing a season-most 218 rushing yards to the Seahawks on 43 attempts.

“You’ve always got to start with stopping the run. That’s going to set you up for success,” strong safety Harrison Smith said.

Vikings wide receiver Adam Thielen has played only a handful of snaps in the five games since hurting his hamstring during a touchdown catch in the first quarter at Detroit. Coach Mike Zimmer said Thielen has “a good opportunity” to return Sunday, but if there’s any question about his condition the Vikings will undoubtedly opt for caution and keep him on the sideline again.

Running back Dalvin Cook is also uncertain for the game, having departed in Seattle in the third quarter, but his injury to the collarbone area is more about pain tolerance than risk of reinjury.

“I feel good, actually better than I expected,” Cook said. “I’ll be out there.”

Detroit wide receiver Kenny Golladay has joined Hall of Famer Randy Moss as the only two players in the last 35 years to have at least 45 receptions, average 20-plus yards per catch and score nine receiving touchdowns or more through the first 12 games of the season. Golladay needs 50 yards to reach the 1,000-yard mark for the second straight year and give the Lions a 1,000-yard receiver for the 10th consecutive season.

The Vikings have been uncharacteristically vulnerable in pass defense this season, with two-time Pro Bowl cornerback Xavier Rhodes among the culprits. Golladay is far from the only downfield threat posed by the Lions, with Marvin Jones and Danny Amendola also needing to be accounted for. Jones had four touchdown receptions against the Vikings in the first matchup this year.

STREAKS, STATS AND NOTES — Vikings have won four straight in series. … Lions eliminated from contention for playoffs for third straight year. With one more loss, Lions would clinch worst record since finishing 4-12 in 2012. … Lions have lost eight of last nine games, dropping coach Matt Patricia’s record to 9-18-1. … Detroit rookie QB David Blough expected to get first NFL road start after passing for 280 yards, two TDs and one interception vs. Bears in debut in place of Matthew Stafford. Stafford has missed four straight games with back, hip injuries. … Lions signed former Vikings practice squad QB Kyle Sloter to be backup. … Lions WR Marvin Jones had four TD receptions vs. Vikings in last meeting. … Detroit WR Kenny Golladay, tied for sixth in league in receiving yards, needs 50 more to reach 1,000-yard mark for second straight season and give Lions 1,000-yard receiver for 10th straight year. … Jones and Golladay tied with Buccaneers WR Chris Godwin for league lead with nine receiving TDs. … Lions DE Trey Flowers has five sacks in last five games. … Vikings trail Packers by one game in NFC North, lead Rams by one game for second wild- card spot. … Vikings have three home games against division foes in final quarter of season for first time in team history. … Minnesota QB Kirk Cousins, second in league in passer rating (111.9) and third in yards per attempt (8.5), has 10 total TDs and one interception with 129.6 passer rating in five home games this year. … Vikings RB Dalvin Cook, who left last game with injury to shoulder/chest area, is second in NFL with 1,536 yards from scrimmage and tied for league lead with 12 rushing TDs. … Vikings TE Kyle Rudolph has six TDs in last six games. He has nine TDs in 15 career games vs. Lions. … Vikings defense allowed season highs in points (37) and rushing yards (218) to Seahawks. … Vikings DE Danielle Hunter needs half-sack to become youngest player in NFL history with 50 career sacks. … Fantasy tip: If Cook sits out or has workload limited, Vikings rookie RB Alexander Mattison would become valuable commodity. Mattison is 11th in league with average of 4.84 yards per rush among players with 75-plus attempts. He has 480 yards from scrimmage, third on team.