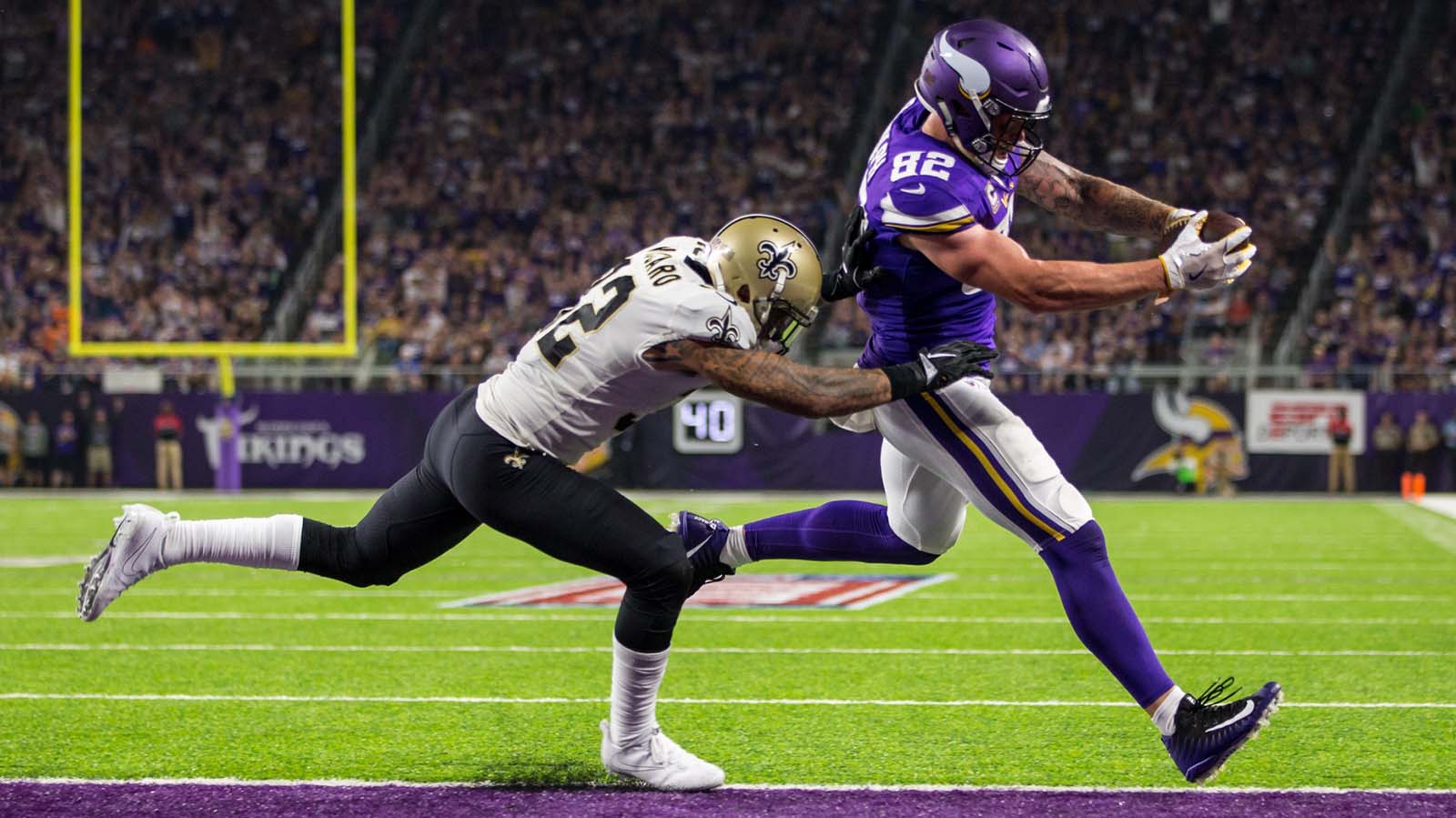 MINNEAPOLIS — Sam Bradford set the NFL record for completion percentage for Minnesota last season, his accuracy aided by the volume of short passes under heavy pressure.

With protection from the rush, he showed Monday night he can throw the ball down the field with the best of them.

Bradford started his second year with Minnesota in style, passing for 346 yards and three touchdowns to help the Vikings beat New Orleans 29-19 and spoil Adrian Peterson’s first game with the Saints.

“When I’ve got time to sit back there and kind of evaluate things, I’ve got all the confidence in the world that our guys outside are going to win,” Bradford said.

Stefon Diggs had seven receptions for 93 yards, two for scores and all in the first half, and Adam Thielen racked up 157 yards on nine catches as Bradford carved up a Saints defense that looked again like one of the worst in the league despite a major renovation. Rookie Dalvin Cook rushed for 127 yards on 22 carries in the formal takeover from Peterson.

Peterson was limited to 18 yards on six carries, in a time share with Mark Ingram and Alvin Kamara and an afterthought once the Saints fell behind. Drew Brees was quiet, too, with 291 yards on 27-for-37 passing padded by the late push to catch up.

“We didn’t do anything different or try to out-trick them,” Vikings linebacker Anthony Barr said. “You know, line up and play, do your job.”

Coby Fleener caught the only touchdown toss, after the 2-minute warning. Will Lutz made four field goals, three under 25 yards.

“The bottom line,” Brees said, “is you’ve got to score touchdowns.”

Brees and Bradford are both in the final year of their contracts, with the same agent, Tom Condon, who is sure to cash in on both clients. Brees has by far the better resume, nine seasons further into his career, but Bradford stole the show on this prime-time stage.

Behind mostly clean pockets created by a remade offensive line, Bradford completed 27 of 32 passes without a turnover. With three rookies and three free agents in the starting lineup, the Saints tried hard to better a defense that has held Brees and company back since the Super Bowl title eight years ago. The first performance left a lot to be desired, with Diggs and Thielen consistently finding favorable matchups underneath and along the sideline.

“I just try to run a route, catch the pass, but Sam, you know, he’s a slinger,” Diggs said.

The Saints had three unnecessary roughness calls in the first half. Two of the personal fouls extended a drive that ended with one of three field goals by Kai Forbath. The other 15-yarder was on safety Kenny Vaccaro for head-hunting Diggs during an acrobatic catch in the closing seconds of the first half. Diggs came right back with another highlight-reel grab to give the Vikings a 16-6 lead at the break after a 10-play, 95-yard drive.

Cameron Jordan and A.J. Klein each had their hands on a tipped pass in the end zone that fluttered off Cook’s hands, missing a critical opportunity to thwart that drive and keep the deficit at four points.

Cook became the first Vikings rookie running back to start a season opener since Michael Bennett in 2001. Despite trouble hanging onto a couple of passes thrown his way, he helped salt away the game in the second half. Bradford and Cook were the primary beneficiaries of the work done by an offensive line with four new starters and plenty of old external skepticism after a lackluster 2016 performance.

“In the building, we felt great about those guys,” Bradford said. “We’ve seen what we’re capable of doing.”

Ten years and two days after Peterson made his NFL debut in purple with 103 yards rushing and a 60-yard touchdown reception on this same block of downtown Minneapolis, albeit in a different stadium, he returned in black, white and gold as a part-time player for the pass-first Saints.

The crowd was really fired up for the reunion with another former Vikings great. Former wide receiver Randy Moss, already on site as an analyst for ESPN, became the 22nd member of the team’s Ring of Honor in a halftime ceremony punctuated by a passionate speech and shout-out to the fans.

The Saints play Sunday against New England, their only home game in the season’s first five weeks.

The Vikings visit Pittsburgh on Sunday, their only road game over the first four weeks of the schedule.