Upon Further Review: Vikings at Packers

Kirk Cousins wasn’t asked to do much in Week 1.

The Minnesota Vikings dialed up just 10 passes against the Atlanta Falcons, leaning on a revitalized run game and their fearsome defense en route to a blowout win.

With the defense reeling and the Green Bay Packers up big early Sunday, the Vikings needed more from their $84 million quarterback. He didn’t deliver.

The Packers forced the issue early, jumping out to a 21-0 lead in the first quarter. Cousins never seemed to settle in, fumbling on consecutive plays with the Vikings trailing 14-0 and turning the ball over three times on the day. The most egregious came with just minutes to play and the lead within reach: An inexplicable heave to the end zone on first-and-goal in the fourth quarter that all but ended the game.

Aaron Rodgers, meanwhile, came out flying after struggling in Week 1, going 16-for-22 for 151 yards and two touchdowns in the first half alone. And while the Vikings’ defense rallied in the second, holding Rodgers in check the rest of the way, the offense never recovered.

Here’s a recap of Sunday’s game:

Dalvin Cook powered the Vikings offense for the second straight week, racking up 154 yards and a touchdown on 20 carries. He broke free for a 75-yard touchdown in the second quarter, cutting the Packers’ lead to 21-7. After going over 100 rushing yards just twice through the first 15 games of his career Cook is up to 265 yards and three touchdowns already. Those numbers should typically be enough to get the Vikings a win — they’re now 3-1 when Cook goes over 100 rushing yards — but Cousins’ struggles were too much for the talented runner to overcome.

Hercules Mata’afa appeared to have come up with a game changer on the Packers’ first possession of the second half. He pounced on a Rodgers fumble in the third quarter, setting up Cousins’ 45-yard touchdown pass to Diggs just three plays later, a score that cut the Packers’ lead to just five points. Signed last spring after going undrafted out of Washington State, Mata’afa suffered a torn ACL just a few months later. He played 28 snaps against the Falcons in Week 1, and while he was on the field for just eight snaps in Week 2, Mata’afa made the most of his limited playing time. 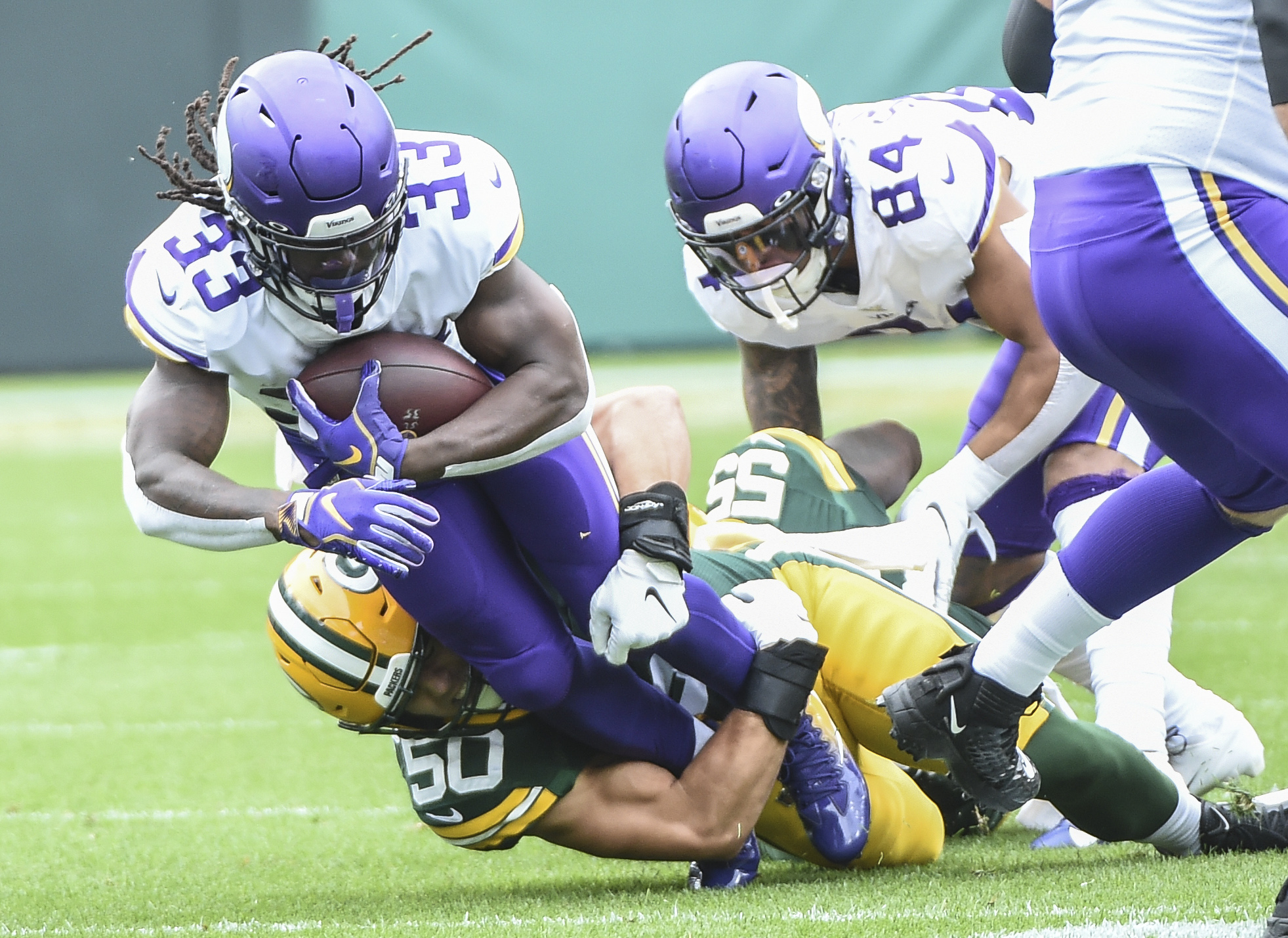 The comeback was on with just over five minutes to play in the fourth quarter. Cook and rookie running back Alexander Mattison led a 52-yard drive down to the Packers’ 8-yard-line, while Cousins chipped in with a six-yard run of his own and a quick pass to tight end Kyle Rudolph. But with the Packers on the ropes, Cousins gave the game away. Cousins backpedaled after rolling out to his right on first-and-goal, appearing to throw the ball away more than 10 yards behind the line of scrimmage. Instead he attempted an ill-advised pass to Diggs in the back of the end zone, a ball that was picked off by Packers defensive back Kevin King. The Vikings never threatened again. It was a concerning day for Cousins all around. He finished just 14-for-32 for 230 yards, two interceptions and a touchdown, while his 43.75% completion percentage was his second worst in 75 career starts.

The Vikings were slapped with 100 yards worth of penalties for the second straight week. They were flagged eight times against the Packers. A few of those calls cost the Vikings crucial points. Cook was flagged for offensive pass interference in the second quarter, negating a Diggs touchdown. Diggs finally got into the end zone in the third quarter, but was hit with an unsportsmanlike conduct penalty for removing his helmet while celebrating the score. The infraction pushed Dan Bailey’s extra-point attempt back 15 yards.

“We fought hard, but we didn’t play well enough to win. We had some dumb penalties. The interception at the end of the ballgame hurt.” – Head coach Mike Zimmer.

“Eventually one of us was going to make a play to get this game rolling, and it was just me that made a play.” – Cook.

The Vikings host the Oakland Raiders in Week 3 before visiting the Chicago Bears. The Raiders came back to earth Sunday after knocking off the Denver Broncos in Week 1. Derek Carr threw a pair of interceptions and Kansas City’s offense exploded for 28 points in the second quarter, handing Oakland a 28-10 loss.