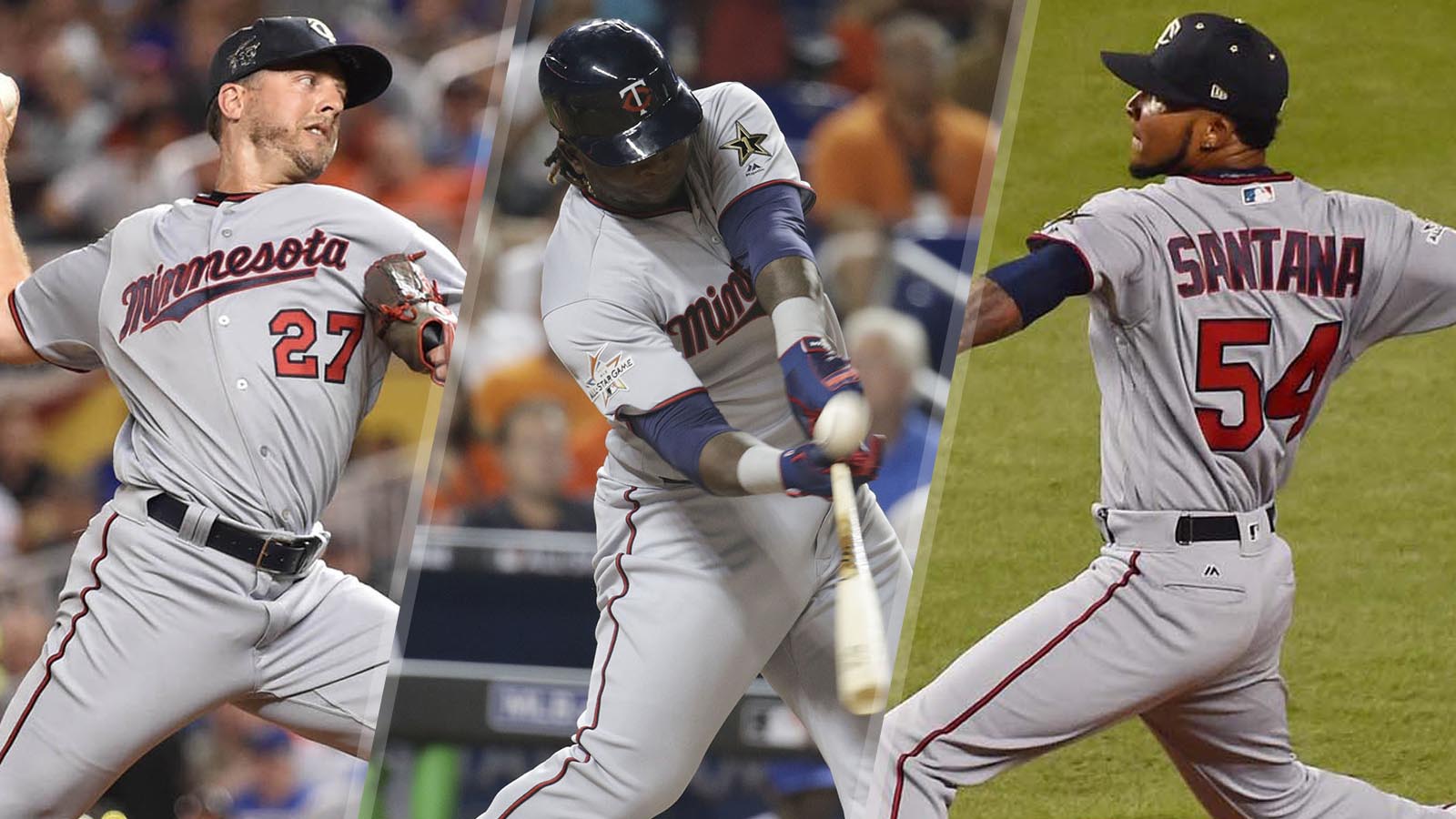 MIAMI — A new-look All-Star Game ended with an old-time score.

Robinson Cano homered off Cubs closer Wade Davis leading off the 10th inning and the American League beat the National League 2-1 Tuesday night in an All-Star Game dominated by this era’s flame-throwers, rather than its standout sluggers.

The Twins had a great showing in the fifth inning. Third baseman Miguel Sano knocked in a run to put the AL up 1-0, and right-hander Brandon Kintzler shut down the NL in order.

Craig Kimbrel wiggled out of a jam in the ninth and right fielder Justin Upton made a lunging catch in the 10th to help the AL win its fifth in a row. And for the first time since 1964, the rivalry is back to all even — 43 wins apiece with two ties, and each side has scored exactly 361 runs.

Andrew Miller finished off the win and celebrated with his AL teammates. Even though home-field advantage in the World Series no longer goes to the league that wins the All-Star Game, it was a victory worth savoring.

Cano earned the MVP honor with his one clutch swing. At 34, the Seattle second baseman was among the oldest players in a game built around so many of the sport’s new, young stars. He sent a hanging curve off the back wall of the right-field bullpen, then blew a bubble with his gum when rounding the bases.

Cano’s homer came exactly 50 years after the previous extra-inning homer in an All-Star Game, when Tony Perez hit a tiebreaking 15th-inning shot off Catfish Hunter in the NL’s 2-1 win at Anaheim, California. Perez, now a Marlins executive, was among eight Latin-born Hall of Famers who threw out ceremonial first pitches.

Yadier Molina tied the game 1-1 in the sixth with a home run off Ervin Santana.

Molina had just entered behind the plate in the top half and snapped off an All-Star first — Nelson Cruz pulled a phone out of his uniform pants and asked the catcher to snap a photo of him with umpire Joe West.

Davis wasn’t with the Cubs last fall when they won the World Series for the first time in 108 years. He was acquired in a trade from Kansas City to fortify the bullpen, and was the only Cubs player in this showcase. Chicago has struggled this season, going into the break at 43-45.

Kimbrel, throwing at up to 100 mph, stranded runners at second and third to end the ninth, striking out Michael Conforto. The Boston closer wound up with the win.

Miller, whose Cleveland Indians lost the World Series in Game 7, got the save with some help from Upton.

A left fielder playing in right for the first time in four years, Upton extended his arm on a full run to catch Corey Seager’s liner leading off the 10th. Miller walked Joey Votto with two outs, then struck out rookie sensation Cody Bellinger.

The AL’s first six hits were by first-time All-Stars but some things don’t change. The AL has won 12 of 15 and 17 of the last 20 All-Star Games played to a decision.

A night day after winning the Home Run Derby with 47 long balls, Yankees rookie sensation Aaron Judge went 0 for 3 with a strikeout, groundout and flyout. Giancarlo Stanton, the star slugger of the hometown Marlins, was 0 for 3 with a pair of strikeouts and a dribbler in front of the plate.

In the first All-Star Game in Florida, Jonathan Schoop doubled off Wood with two outs in the fifth and came home when Sano blooped a single about a foot fair down the right-field line, 207 feet from home plate, where right fielder Bryce Harper, second baseman Daniel Murphy and first baseman Ryan Zimmerman — all from the Washington Nationals — were unable to reach it.

Two days shy of his 35th birthday, Molina became the oldest catcher to homer in an All-Star Game, driving a 95 mph from Santana into the right-field bullpen.

Molina was part of a modern All-Star moment in the top of the inning, when he entered wearing a shiny gold helmet ad chest protector. Cruz pulled a phone out of a uniform pants pocket when he stepped to the plate and asked Molina to take a picture of him posing with West, who last month became the third ump to work 5,000 regular-season games.

Scherzer, limited to one inning, used a full-count slider to strike out Judge, only third rookie to bat third in an All-Star Game after Joe DiMaggio in 1936 and Dick Wakefield in 1943.

“When you get to face the best from the other side and you get the start, the adrenalin starts flowing and you want to throw everything as hard as you can,” Scherzer said.

AL starter Chris Sale, who threw two innings, fanned Stanton in the first. The lefty also neared 100 mph with his fastest pitch of the season.

“I was able to let loose a little bit,” Sale said. “I wouldn’t want to take that style into the regular season.”

Martinez hit 100 mph on four of 14 pitches in the third. He matched the most strikeouts by a St. Louis Cardinals pitcher in an All-Star Game, set by Dizzy Dean in 1934.

Harper made a diving backhand catch in short right center as his cap fell off, robbing Salvador Perez of a hit for the final out of the second. Harper wore blue-and-orange spikes with the image of late Marlins star Jose Fernandez and the pitcher’s No. 16 outlined in a circle.

Yankees reliever Dellin Betances, dealing with mechanical problems of late, threw just 12 of 23 pitches for strikes in the third. He walked Harper and Buster Posey, threw a pair of wild pitches and got out of a bases-loaded jam when Murphy grounded out. Betances joined Juan Marichal, Dave Stieb and John Smoltz as the only ones to throw two wild pitches in an All-Star inning.

“After I lost Harper I lost concentration a little bit,” Betances said. “I was able to settle down and make pitches when I needed to.”