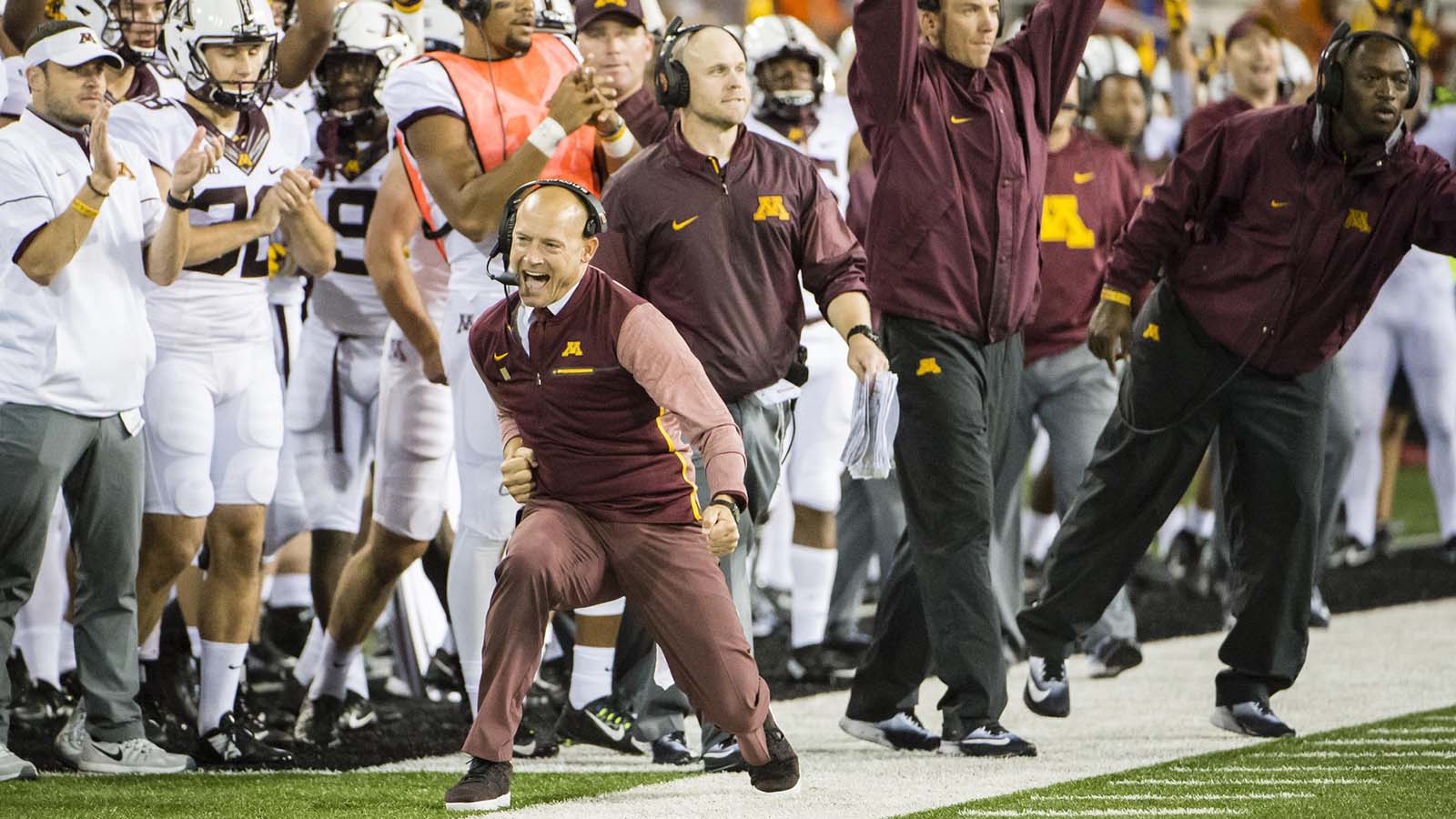 CORVALLIS, Ore. — The P.J. Fleck era at Minnesota is off to a 2-0 start after Shannon Brooks scored three touchdowns and the Gophers turned three Oregon State turnovers in 17 points in a 48-14 win over the Beavers on Saturday night.

Conor Rhoda, who came into the game sharing the quarterback position with sophomore Demry Croft, completed 7 of 8 passes for 158 yards and one touchdown. Tyler Johnson caught four passes for 127 yards and a touchdown for Minnesota.

Minnesota’s running game punished the Oregon State (1-2) defense, allowing the Gophers to control the ball for more than 38 minutes. Rodney Smith ran 30 times for 92 yards and a touchdown, while Brooks had 17 carries for 91 yards.

“Obviously, I’m excited about the win, but it’s not about the win. It’s about how we played, and they executed the game plan perfectly,” Fleck said.

A week ago, Rhoda and Croft split time during the Gophers’ 17-7 win over Buffalo. But Rhoda took most of the meaningful snaps against Oregon State, playing all but three series.

“Today is the first time I’ve watched Conor Rhoda control the football team. Seven of eight (passing), that’s pretty elite right there. I thought he led us better than he ever has,” Fleck said.

Fleck said Rhoda took most of the snaps because during the second quarter, Croft fumbled, and rather than fall on the ball, he tried to scoop it up.

“We never scoop and score on offense,” Fleck said. “These are life lessons and football lessons we have to learn.”

Fleck declined to speculate as to whether Rhoda has won the job outright.

Oregon State’s Jake Luton completed 16 of 28 passes for 135 yards, while the Beavers had just 80 yards rushing.

The 1-2 start to the season — the lone victory a narrow win over FCS Portland State — has the Beavers scrambling for answers.

“Absolutely not what I expected in any way shape or form. That’s on me. Not on those kids,” Oregon State coach Gary Andersen said. “We’ll keep fighting. The football team is not playing well and it’s a football team I’m in charge of.”

Minnesota outgained Oregon State 411-225 and forced three turnovers, all fumbles, resulting in two touchdowns and a field goal. Oregon State had 35 total yards and one first down during the second half.

Minnesota: The Gophers’ 48 points was the most in a road game since Minnesota scored 49 points against Northwestern in 1980. . . . Tyler Johnson is quickly emerging as an offensive star after back-to-back 100-yard receiving games to start the season. The sophomore recorded his second touchdown play of more than 60 yards this season with a 67-yard catch-and-run that gave the Gophers a 7-0 first-quarter lead. . . . Minnesota has won three consecutive games over Pac-12 opponents during the past two years. In 2016, the Gophers beat Oregon State in the season opener, and Washington State in the Holiday Bowl. Emmit Carpenter, the 2016 Big Ten kicker of the year, appears back on track after missing his first two field goal attempts of the season. Carpenter has made three consecutive field goals, including kicks of 26 and 49 yards against OSU.

Oregon State: One of Andersen’s stated goals heading into the season was 30 sacks by the defense. Through three games, the Beavers have yet to record a sack. . . . Freshman David Morris had 17 tackles, the most by a Beaver since 2010, when Lance Mitchell recorded 18 stops against Texas Christian. . . . Following a week where the Willamette Valley skies were filled with smoke from statewide wildfires, there was blue sky and clouds over Reser Stadium prior to kickoff, followed by periodic rain during the game. Safety Jalen Moore was ejected from the game for targeting late in the third quarter.

MEANWHILE, AT QB FOR OREGON STATE

While Minnesota may have made strides in settling its quarterback position, questions will emerge for Oregon State. With Luton struggling to generate meaningful offense against the Gophers, Andersen said he considered turning to backup Darrel Garretson.

“By the time you got to that point, it was Jake’s game to finish in my opinion. Darrel is a seasoned quarterback. He’s not a guy you put in that situation just to get reps,” Andersen said.