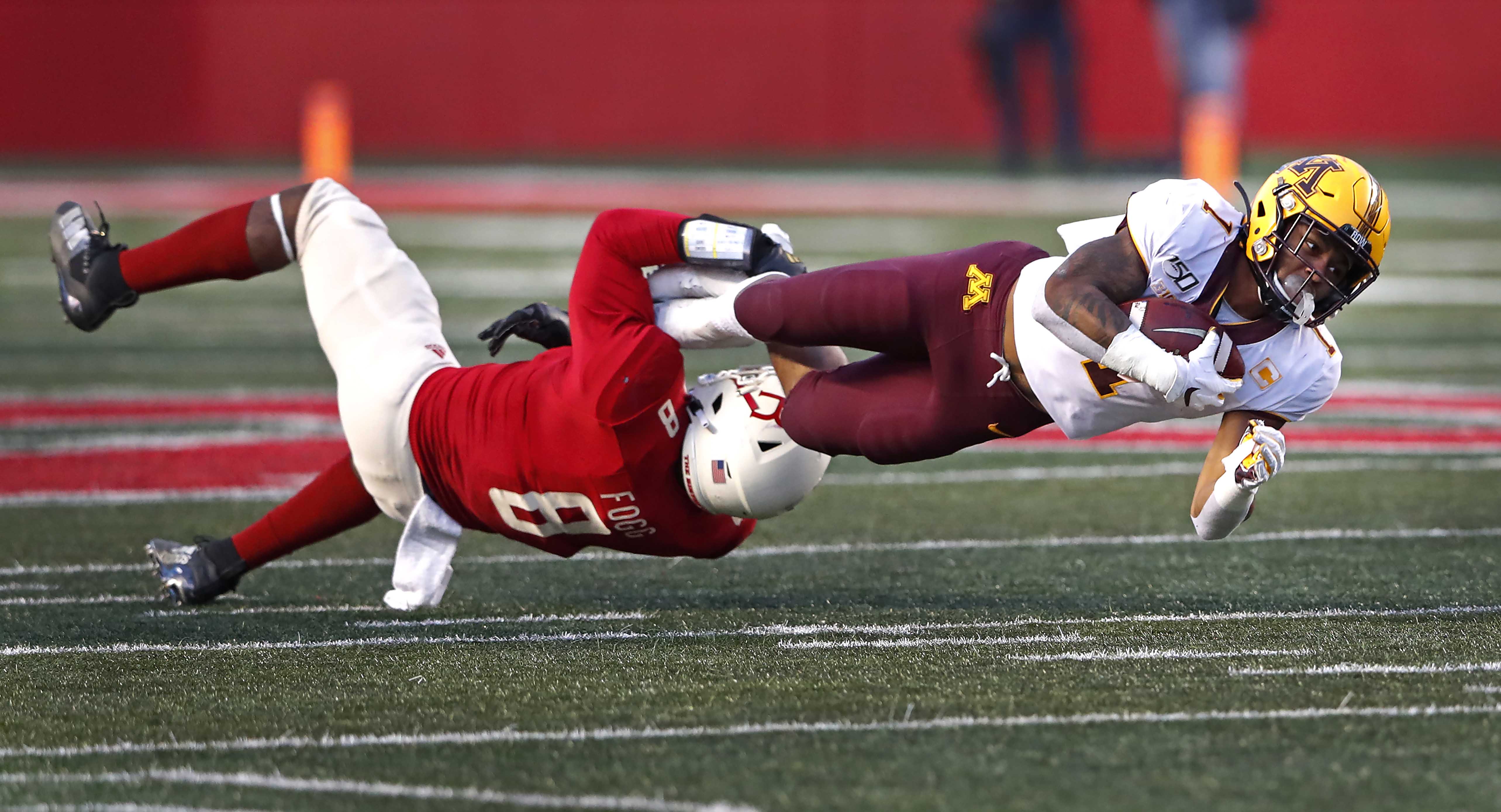 PISCATAWAY, N.J. — No. 20 Minnesota won its first game as a ranked team in five years and suddenly it has the lead in the West Division and a clear path to the Big Ten title game .

It all fell into place Saturday as Rodney Smith ran for 111 yards and two touchdowns and the Gophers improved to 7-0 for the first time since winning the national title in 1960 with a 42-7 victory over Rutgers on Saturday.

Coupled with Illinois‘ stunning last-second victory over No. 6 Wisconsin, Minnesota (7-0, 4-0) has a one-game over the Badgers (6-1, 3-1) in the division and control over its destiny.

The path is not going to be easy. After facing Maryland (3-4) next weekend, the Gophers get a bye and then face No. 7 Penn State, No. 23 Iowa, Northwestern and Wisconsin in the regular-season finale.

“They’ve been very mature during this whole process,” Minnesota coach P.J. Fleck said. “It’s my job to keep them grounded and focused. Today we’re 1-0 in the Rutgers football championship. That’s all that matters.”

Minnesota struggled against Rutgers in the first half before scoring four touchdowns in the second, including one by the defense.

The nine-game winning streak is the Gophers’ longest since 1941-42.

Morgan gave much of the credit for the offense’s success to his skill players, the runners who can go inside or outside and his receivers, who can beat double coverages.

The Gophers blew the game open in the fourth quarter, when Mohamed Ibrahim had a 6-yard TD run and defensive back Antoine Winfield Jr. scored on a 33-yard interception return on consecutive plays on offense. Morgan threw his second TD, a 56-yard pass to Tyler Johnson that could have been viewed as rubbing it in against a beaten foe.

Rutgers interim coach Nunzio Campanile had no problem with the late TD, saying it was up to his team to prevent it.

There was a tender moment after the Ibrahim touchdown. Redshirt sophomore Casey O’Brien, a four-time cancer survivor, was sent out to hold the ball for the extra point by kicker Michael Lantz. He was mobbed by teammates after the kick.

Rutgers avoided its fourth shutout in a Big Ten game this season when Kay’Ron Adams scored on a 5-yard run with 5:33 to play.

“We have a lot of a long way to go, but like I keep saying, I just want this team to be, those players to be better players by the time we get to the end of the year,” Campanile said.

The Scarlet Knights‘ score prevented Minnesota from picking up its first shutout since 2006 and first in a league game since 2004.

The Scarlet Knights came into the game as 29 1/2-point underdogs and made the Gophers sweat a little. Smith didn’t get Minnesota on the scoreboard until late in the first quarter with his short run and Morgan had a 13-yard TD pass to Rashod Bateman with less than five minutes left in the half. Smith scored from 16 yards out on the opening series of the second half for a 21-0 lead.

Rutgers, which is using its third quarterback in a season marked by the firing of Chris Ash after the fourth game, was outgained 443-197. Johnny Langan was 9 of 19 for 48 yards and three interceptions, two by Winfield.

“It is frustrating at times, but Coach (Campanile) really does a good job of keeping us looking forward to games ahead because it’s another opportunity for us to possible get a win,” said Rutgers linebacker Deion Jennings, who had eight tackles, including three for losses, in his first start.

Minnesota: The Gophers stay undefeated, face inconsistent Maryland at home next week and then get a week off before Penn State.

Rutgers: Rutgers put up a good effort on defense until late. The positive is that next week is a winnable game.