Gophers improve to 6-0 with 34-7 win over Nebraska 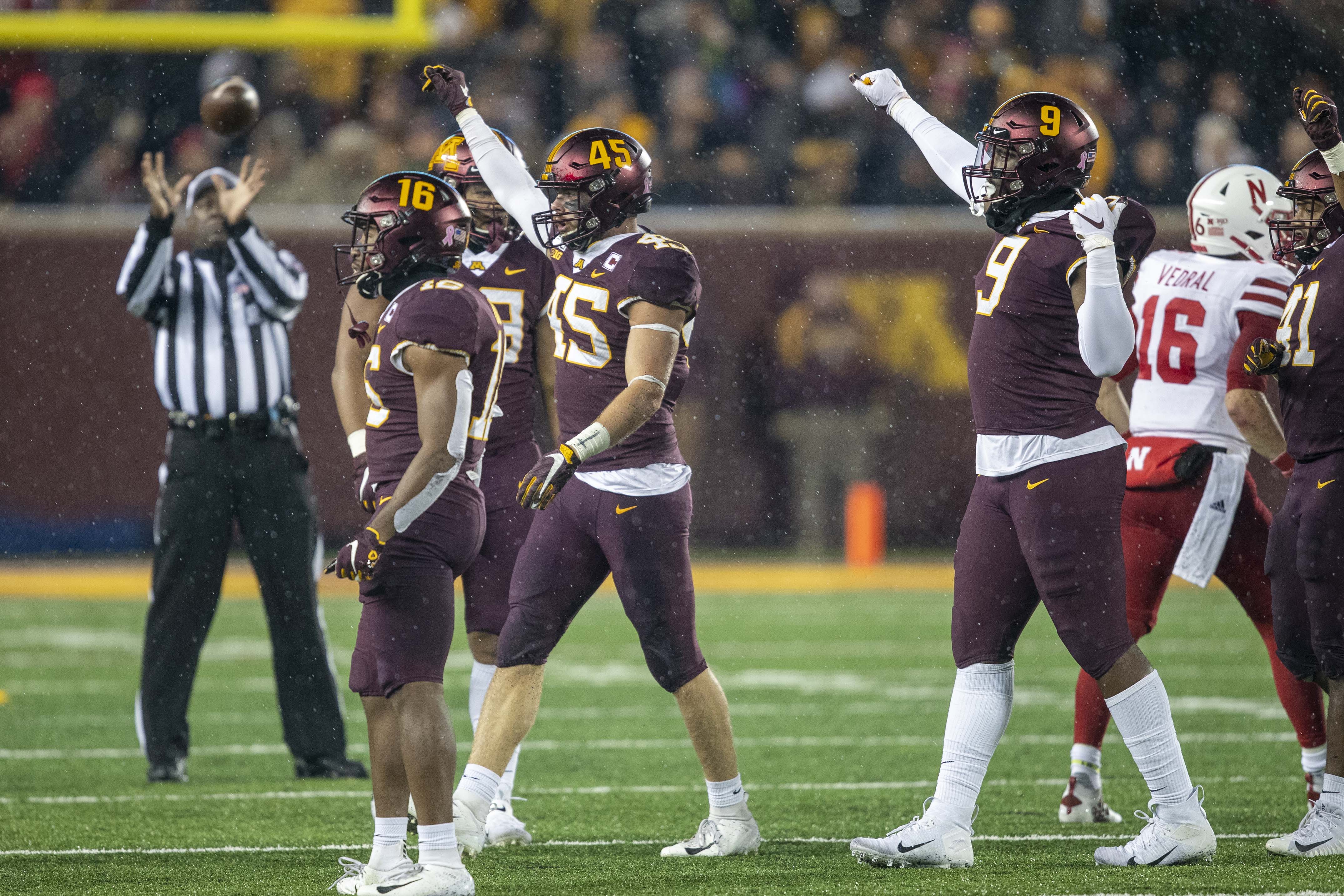 Smith ran for 139 yards and a touchdown, Brooks rushed for 99 yards, Ibrahim had 84 yards and three touchdowns, and the Gophers (6-0, 3-0) stayed in a tie for first place in the Big Ten West Division with rival Wisconsin behind an all-around performance that had the Huskers (4-3, 2-2) on their heels all evening. Minnesota’s last 6-0 start was in 2003, and the eight-game winning streak including the last two contests of last season is the longest for the program since 1948-49.

“All three of us out there is tough for defenses, and we know that,” Smith said. “We have three different running styles, and we have fresh bodies rolling in.”

With Nebraska quarterback Adrian Martinez sidelined by a left knee injury, Noah Vedral took over for his first career start and was under pressure nearly every time he dropped back to pass. He went 14 for 23 for 135 yards and rushed 15 times for 49 yards, but the Gophers had four sacks and kept the Huskers from scoring until early in the fourth quarter. Leading receiver Wan’Dale Robinson left on a cart with an injury to his lower left leg in the second quarter, one of an endless string of setbacks for the Huskers.

“I thought we had a team that was ready to play,” Nebraska coach Scott Frost said. “We got pushed around on both sides of the ball.”

The Gophers, who turned down the thermostat in their indoor facility this week as low as it would go and repeatedly directed their skill position players to dip their hands in ice water between drills, were more than ready for the second-coldest October game in the 11-season history of TCF Bank Stadium. The kickoff temperature was 37 degrees with gusty wind and a rain-snow mix, the ideal scenario for turning their senior tailbacks Smith and Brooks loose and mixing in the powerful sophomore Ibrahim.

“They don’t care who goes in the game,” Minnesota coach P.J. Fleck said. “You will never see anybody pout.”

After a well-covered Maurice Washington dropped a fourth-and-2 dump-off by a heavily pressured Vedral from the 29 on the opening drive, the Gophers went the other way in five plays and 71 yards to score on a 15-yard tunnel screen pass from Tanner Morgan to Chris Autman-Bell.

Vedral found JD Spielman wide open off a crossing route for a 51-yard gain on the following possession to reach the 26, but then he was sacked on back-to-back plays. Still with a prime opportunity to tie the game on their next series, Robinson scampered down the sideline on a run that ended inside the 5 on the first play of the second quarter, but fellow wide receiver Kanawai Noa wiped that out with an illegal block on the second.

Whether it was first down or third down, the Gophers leaned hard on their inside zone running attack with sparkling results. Right tackle Daniel Faalele was out, so left guard Blaise Andries took his spot, center Conner Olson slid over for Andries, and John Michael Schmitz started at center for the first time. The reshuffled front manhandled an all-senior Nebraska defensive line that averages 320 pounds between the three of them.

On the first play of the third quarter, Morgan froze the Huskers with a hard run fake and found Tyler Johnson wide open for 45 yards to set up Ibrahim’s second touchdown. On third-and-44 at their 44, trailing 21-0, the Huskers tried a fake punt, but tight end Austin Allen was stopped short after taking the snap.

Nebraska: With a coach Frost, well, the Huskers ought not to have been psyched out by the adverse conditions, but they were off all night. Their troubling trend of stumbling out of the locker room at halftime continued, too, with a five-play, 63-yard touchdown drive for the Gophers followed by a punt for the Huskers. They’ve been outscored 75-41 in the third quarter this year, including 37-7 in the last three games.

Minnesota: The Gophers are bound to crack the next Associated Press Top 25 poll, after being the first team below the cut in the latest edition. They haven’t been ranked by The AP since the last week of the 2014 season, and they’re surging toward an unbeaten record for the Nov. 9 matchup at home against Penn State. The play calling by offensive coordinator Kirk Ciarrocca was superb, and the Gophers are scoring at their highest rate since 2005, an average of 35 points per game.

Nebraska: After their first of two idle Saturdays in a four-week span, the Huskers host Indiana on Oct. 26. This will be the first time the Hoosiers have played at Nebraska since the Huskers joined the Big Ten in 2011 and just the second time they’ve met as conference foes.

Minnesota: The visit to Rutgers next Saturday will be the first in program history for the Gophers, who have won four straight games away from home starting with last year’s win at Wisconsin. The Scarlet Knights have been outscored 165-7 in their four Big Ten games this season.

“We can’t fall asleep at the wheel,” Smith said, “and we know that.”