In the first of our four-part series, FOX Sports NFL and college football analyst Coy Wire breaks down one of the matchups essential to determining the outcome of the Super Bowl. Today, he looks at whether Seahawks running back Marshawn Lynch will be able to dominate against the Patriots the way he did against the Packers — and what New England may do to corral him.

The Baltimore Ravens ran the ball well against the Patriots in the divisional playoff round. There was one simple run scheme (known as the 1-Back Zone) that was hitting for them repeatedly and the Seahawks run this scheme well too.

The Ravens were one of the best teams in the league at executing the 1-Back Zone. It’s simple in theory, but it takes the right group of offensive linemen to pull it off.

Linemen on the front side "reach" their responsibility, engage them and try get them "caught up in the wash" — a.k.a get them caught up in traffic and away from the runner — while linemen on the backside often seal their defenders with a cut block.

The running back must have good vision as he patiently waits for a crease to open, possess excellent acceleration to hit the opening before it disappears, and enough power to break through arm tackles as defenders are often forced to reach with an offensive lineman in their face.

Baltimore running back Justin Forsett had 24 carries for 129 yards against New England, but 16 of those carries were zone plays where he repeatedly broke tackles, tallying 90 of his yards and a 5.6-yard average.

Now, the Patriots will face one of the other best zone-run teams in the league in the Seahawks and a running back who is arguably the best in the league in Marshawn Lynch. In addition to getting off blocks and defeating cut blocks, the Patriots still have to wrangle Beast Mode to the ground — and that’s no easy task being that Lynch breaks tackles better than any back in the league.

Let’s take a look at an example of the success that Baltimore found against New England with the zone scheme and what the Patriots will see more of against the Seahawks.

In the first photo you can see how the 1-Back Zone is drawn up against the Patriots’ seven-man front. This was likely a "check with me" call — meaning that the quarterback will designate whether the zone would be run to the "Open side" away from the tight end or the "Closed side" (to the tight end) depending on the defense’s pre-snap alignment.

Since the Pats brought a safety down to the Closed side, Joe Flacco checked the run to the Open side and away from the free hitter: the safety. 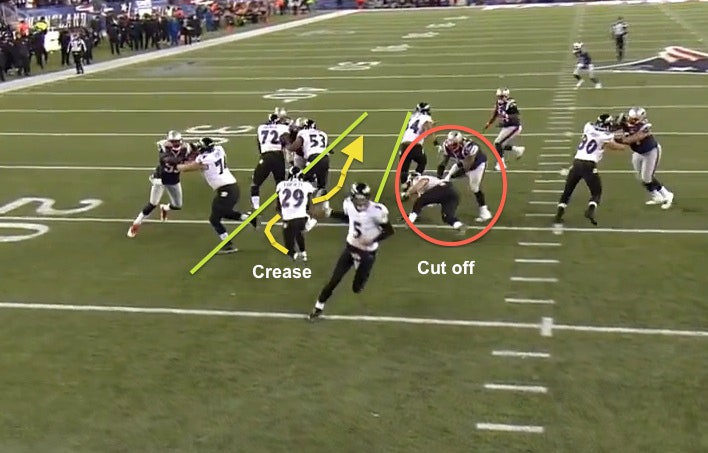 In the next photo you can see that the key block that sprung this 10-yard run by Forsett came from the backside offensive tackle who executed the cut block on Vince Wilfork creating the crease. Forsett spotted it and accelerated through it. 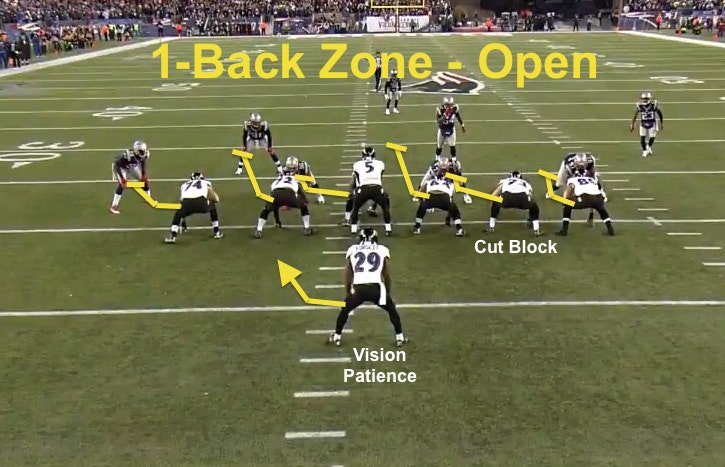 Here’s a look at the Seahawks’ 1-Back Zone (Open) in last week’s conference championship game against the Packers. It provided the 24-yard, go-ahead touchdown run in regulation. It was against essentially the same defensive front as the example we saw above, but the backside offensive tackle didn’t have to use a cut block and the tight end is in a "hang" position and fake-releases instead of being on the line of scrimmage and blocking.

You can see Lynch’s patience, vision, and acceleration through the crease when he spots it. The Seahawks’ 1-Back Zone scheme will present a big challenge for the Patriots. Check it out.

This will be an intriguing game within the game to watch as the contest heats up — especially in the second half. The Pats did better against the Ravens’ zone scheme as the game went on, specifically on plays where they had their defensive linemen and linebackers "shoot" gaps and get penetration into the backfield. We can expect to see them take this approach on perceived run downs much earlier in the game against the Seahawks.

The Patriots’ second-half defensive adjustments were good all year long. New England’s defense ranked fifth in the league for fewest rush yards allowed in the second half and overtimes in the regular season (41.7 yards per game). One of the fun aspects of this Super Bowl matchup is that Seattle’s offense led the NFL with 111 yards per game, with Lynch averaging 5.13 yards per carry, in the second half and overtimes this season.