Super Bowl preview: Brady vs. Sherman could decide who wins the Super Bowl

In the third of our four-part series, FOX Sports NFL and college football analyst Coy Wire breaks down matchups essential to determining the outcome of the Super Bowl. Today, he looks at whether Patriots quarterback Tom Brady will throw at Richard Sherman, the guy who punked him back in 2012.

Richard Sherman is Doctor Death on the football field. The space that he occupies during the game shatters hopes, crushes dreams, and is void of any sign of sustained life for opposing quarterbacks and wide receivers.

Of the 10 passes that have been thrown his way this postseason, Sherman has intercepted two of them and broken up three. He only allowed four completions for 56 yards and a quarterback rating of 19.2. No touchdowns allowed, either.

That’s absurdly impressive — and scary if you’re an opposing quarterback.

So, will Tom Brady allow Sherman to take away half of the field in the Super Bowl? We shouldn’t count on it. The Patriots’ scheme will allow them to attack both sides of the field.

During the game, we should expect Brady and his receivers to employ heavy doses of motions to stack and bunch sets, and inject their game plan with multiple variations of "pick" or "rub" routes — routes where two receivers cross and one tries to screen a defender or disrupt his path to help his teammate get open. That will try to prevent Sherman from being able to infect their passing game — especially on third down.

New England does a phenomenal job of executing these types of routes by using motions and tight alignments before the snap to place receivers in close proximity to their big-bodied tight ends like Rob Gronkowski — using them as human shields that give wide receivers like Julian Edelman, Danny Amendola, and Brandon LaFell time and space to maneuver in front of lockdown corners like Sherman.

Let’s take a look at a few examples from game tape so that we can keep an eye out for the Patriots’ third-down tactic I expect them to employ on Super Bowl Sunday against Sherman and the Legion of Boom.

In the first photo, we’re looking at a third-down situation where Edelman started out on the right side of the formation in a bunch set, but motioned across the formation to an alignment that puts him in close proximity to Gronkowski before the snap.

The defensive back — playing man-to-man against Edelman — motions across with him (red dotted arrow) and he’s the player this play is designed to exploit. 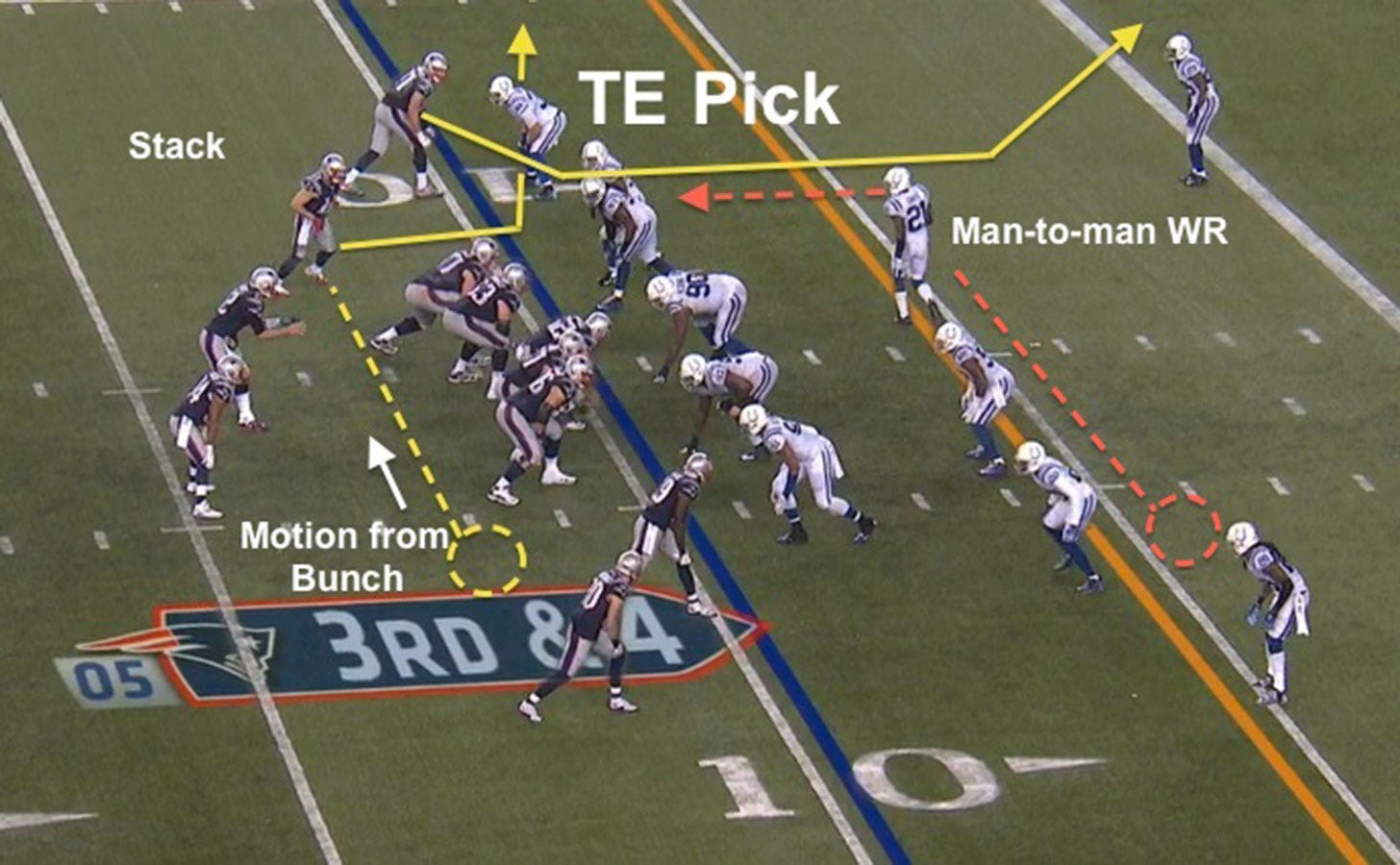 In the next photo, you can see the obstructed path that the tight end (Gronkowski here) causes for the defensive back (red circle) who is trying to cover Edelman (yellow circle). Brady recognizes the time and space that Gronkowski has created for Edelman in the flat. 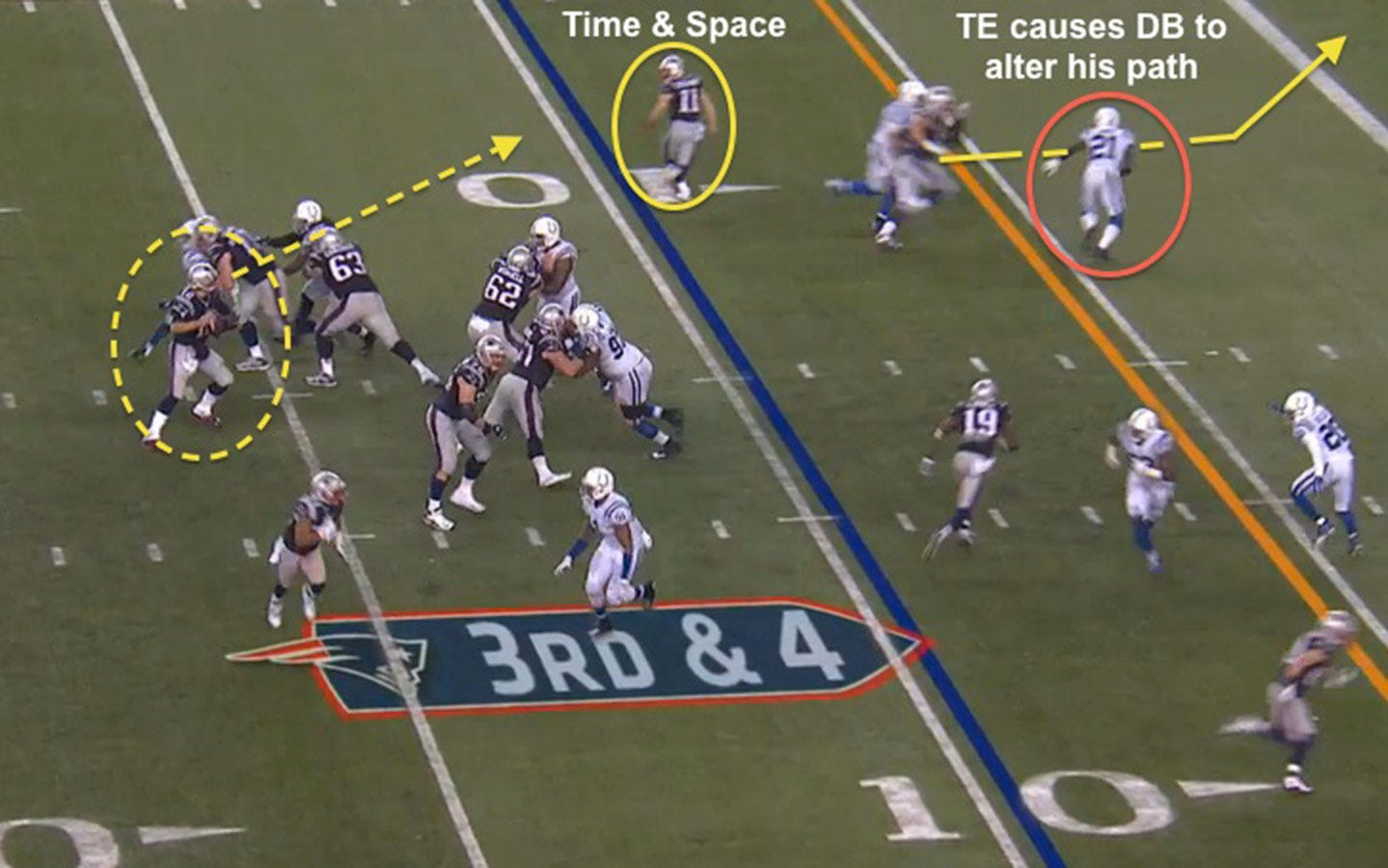 In the photo below you can see the result of this play — the defensive back was beat badly in man-to-man coverage. This was an easy third-down conversion for the Patriots as Brady connected on an easy pitch-and-catch with Edelman, who sat in the huge 6-by-12-yard window that Gronkowski’s obstruction created. 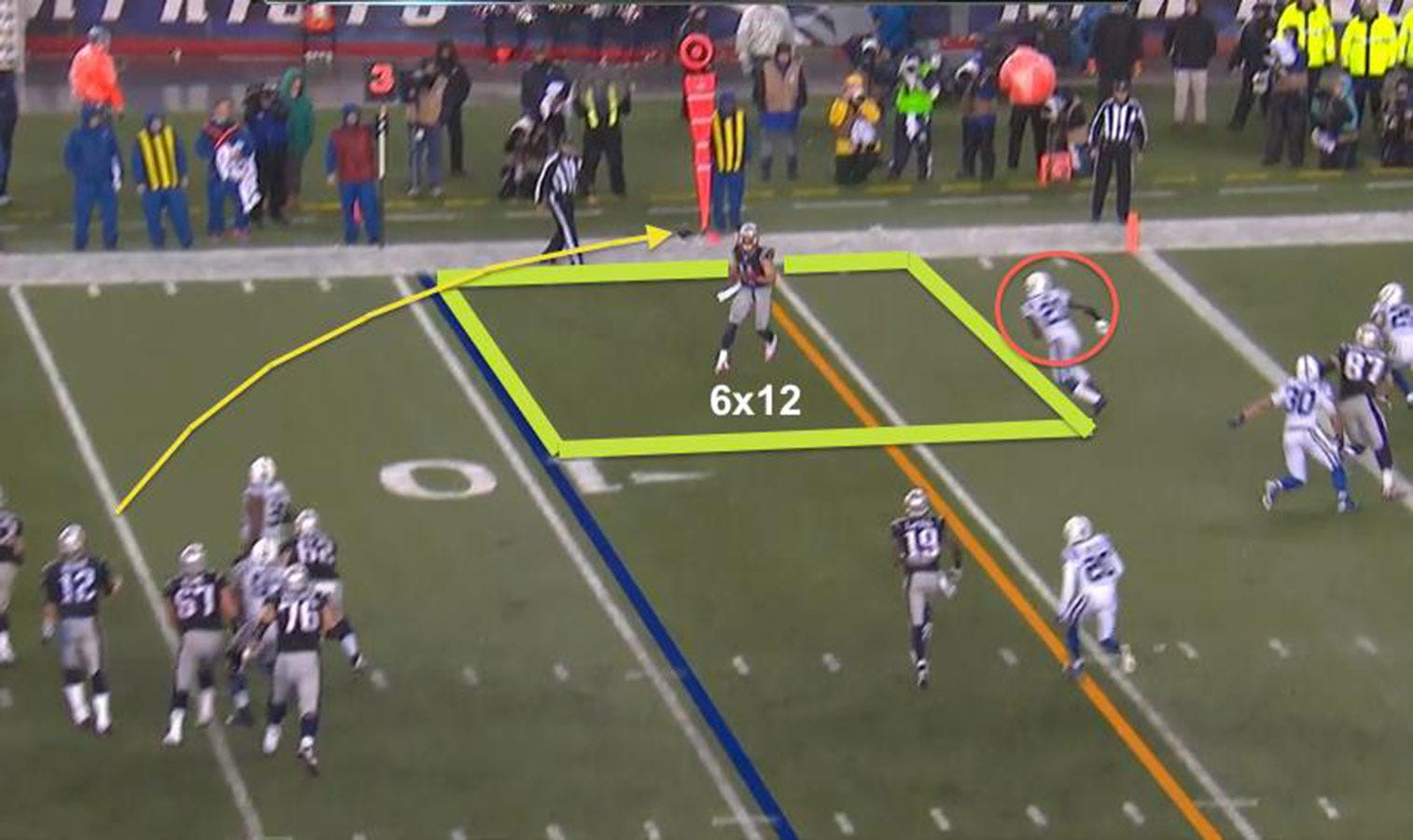 In the next example, you can see that the Patriots will also attack with pick routes without having to use any type of motion. When the ball is on a hash mark, they’ll set the formation by putting the tight end into the boundary and aligning the receiver (Edelman here) within 5-to-6 yards of the tight end. We can expect some sort of pick route or crossing pattern when we see this alignment. 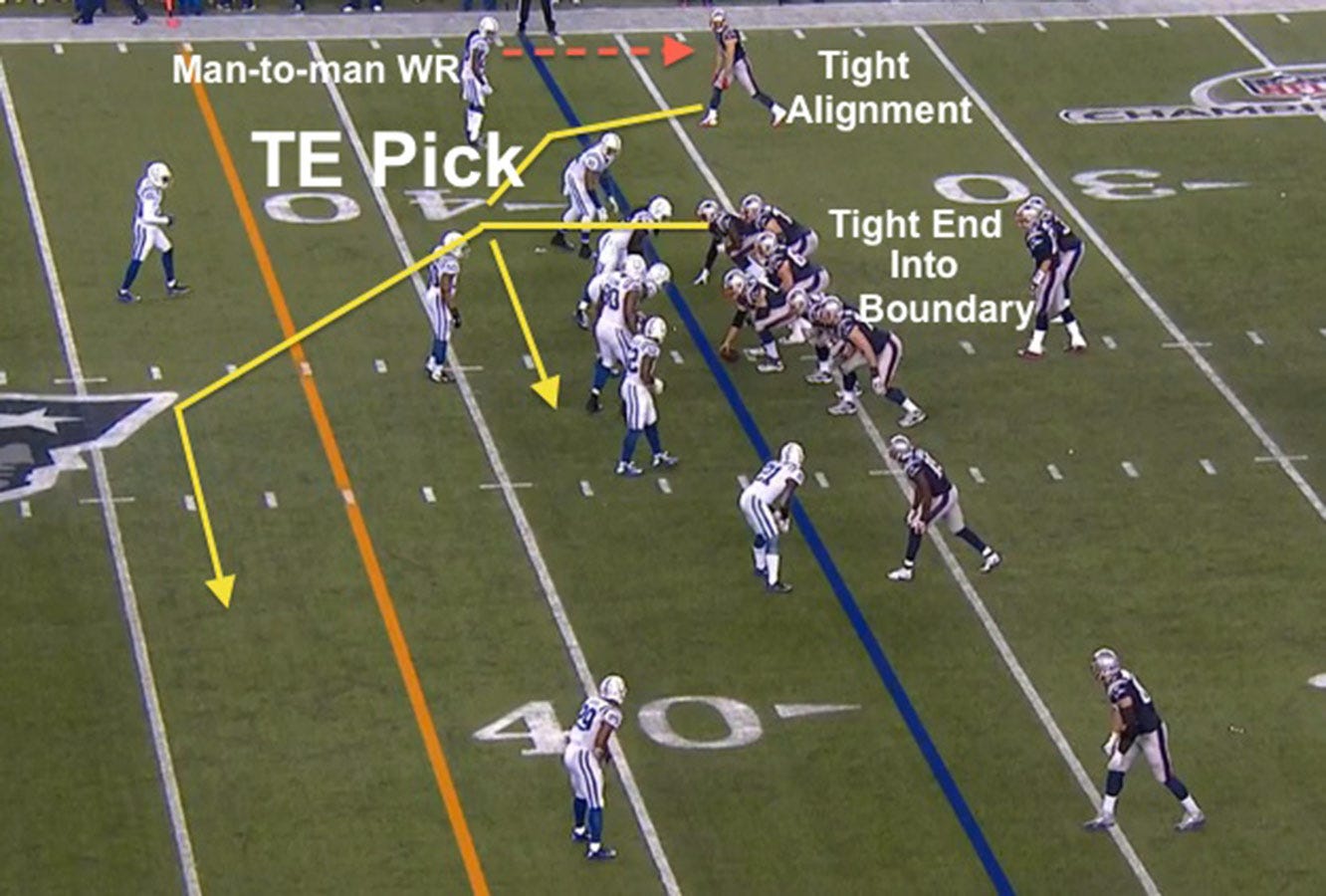 In the next photo you’ll see that the defensive back once again has the path to his coverage responsibility impeded by the path of the tight end. Edelman and Brady enjoy another huge window, time and space, and another third-down conversion. 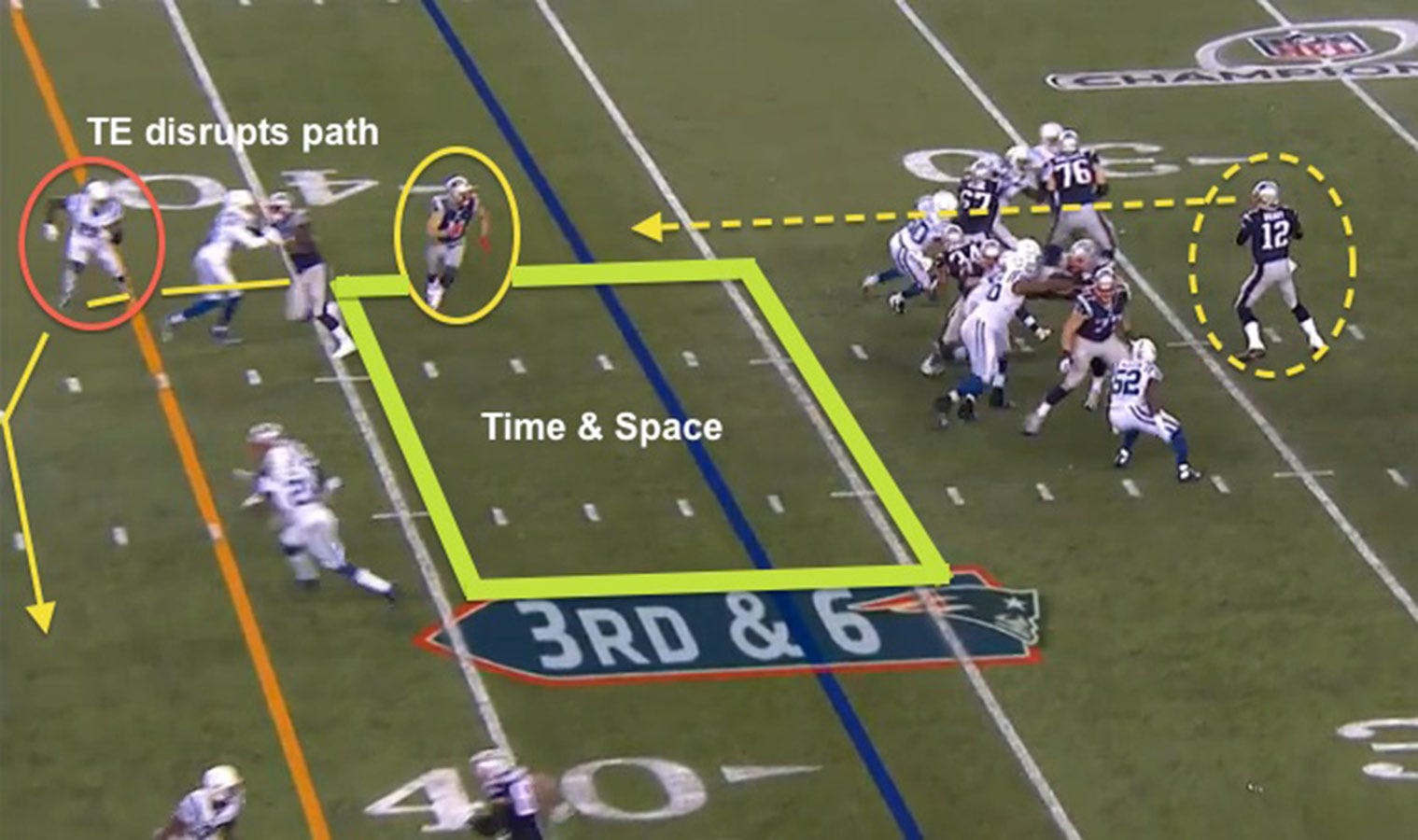 Let’s look at yet another example of a third down from the conference championship game last weekend where Brady was able to attack a cornerback with Edelman by using motion, a stack and an obstruction by Gronkowski.

In the video below, take note that the motion prevents the cornerback from being able to press Edelman — or simply even get in good position — before the snap. Also, take note of the subtle — yet deliberate — path that Gronkowski takes to disrupt the defensive back’s ability to get to Edelman on the route before Brady connects with him for the first down.

Whether they’ll admit it or not, quarterbacks who face Sherman are coming to the realization that they should only look his way as a last resort — or not at all.

But, Brady is as cut-throat of a competitor as you’ll find in all of sports, and he’ll be damned if he’s going to let anyone change his method of operation. Brady will likely try to attack Sherman and the rest of the Seahawks’ secondary with the tactics we looked at here.

One of the games within the game to watch this Sunday will be Sherman and the Legion of Boom vs. Tom Brady and his fleet of receivers on third downs — and specifically how well Sherman and the Seahawks are able to handle wide receivers in motion and in stacks, using picks by Patriot tight ends to get open.