In the fourth of our four-part series, FOX Sports NFL and college football analyst Coy Wire breaks down matchups essential to determining the outcome of the Super Bowl. Today, he looks at how the Patriots can keep Seahawks quarterback Russell Wilson from dominating them with his legs.

Russell Wilson is one of the new breed of dual-threat quarterbacks we’ve seen pop up in the NFL in recent years.

Sure, guys in the past like Randall Cunningham and Steve Young had the ability to hurt you both through the air and on the ground by scrambling, but the proliferation of the pistol formation and zone-read offensive schemes — that attack with designed quarterback runs — make current defensive players worry about more than just a quarterback who can scramble.

Wilson was the league’s leading rusher among quarterbacks this season and it wasn’t even close. He rushed for more than 100 yards three times and — discounting sacks — he tallied a whopping 849 rush yards for the season while Colin Kaepernick finished second with 639. Cam Newton (539), Blake Bortles (419) and Ryan Tannehill (311) rounded out the top five.

While Seattle has only shown a few snaps of the zone-read play (where Wilson has the option to hand the ball off or keep it and burst to the edge of the defense himself) in each of their past few games, the designed quarterback run is part of the Seahawks’ plan — and it could be pulled out in full force on Super Bowl Sunday.

Whether it’s with proper technique or schemes, New England will have a big challenge in the Super Bowl as they must account for Wilson’s mobility.

Let’s take a look at what the Patriots could do to prevent the league’s most effective running quarterback from going bonkers in the big game.

STAY SQUARE ON THE EDGE

In the NFC divisional playoff, the Carolina Panthers did a great job of preventing Wilson from gashing them on the ground as he finished with only 22 yards and a 3.1 yards per carry average. The Seahawks only ran the zone-read twice in the game, but when they did, the Panthers were ready. They didn’t corral him with scheme — they did it with technique.

Let’s look at an example of one of Wilson’s most successful runs in the game — that went for 7 yards and a first down — to see where the breakdown on defense occurred.

In the first photo, the Panthers are playing quarters coverage and they have enough defenders to cover each of the gaps through which either running back Marshawn Lynch or Wilson can run.

As the play develops, you can see that tight end Cooper Helfet (No. 84) released on a decoy pass route and took the original force player with him because that defender was responsible for him in coverage. The new force (contain) player who is responsible for keeping the ball contained (yellow circle) must use proper edge-player technique to prevent Wilson from darting around the perimeter of the defense for a big gain. To do this he must keep his feet square to the line of scrimmage. Wilson reads the feet of the force player to see if he stays square (in which case he’d hand it to Lynch), or if he closes his angle (in which case Wilson knows he can keep it). Wilson sees that the force player doesn’t stay square to the line of scrimmage and uses bad technique here. 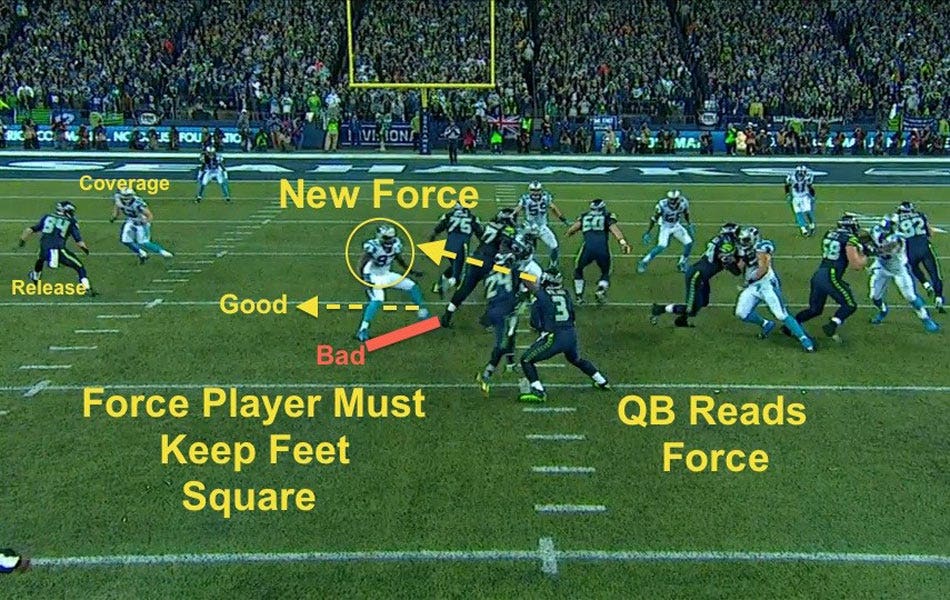 If the force player would have kept his feet square, it would have allowed him to be able to react both to Lynch (if the ball were handed to him) and Wilson (if he kept it). Wilson and the Seahawks benefitted from a nice first down gain here due to the poor technique of the defensive end. The Patriots must use proper technique to avoid this from happening.

Now, let’s look at an example from the tape where this technique was executed properly. We’ll see a two-back lead play with the read by Wilson attached to it.  Like in the previous example, we’re looking to see how the force — or edge — defender plays this play. As in the previous example, you can see that the defense is in good position before the snap to be able to account for every gap through which the ball carrier may run.

Unlike in the first example, the edge defender kept his feet square. This allowed him to have a two-way go — in or out — and keep contain. Wilson ran for only a small gain on this play. This is exactly how the Patriots’ edge defenders — defensive ends and outside linebackers — must play in order to keep Wilson under wraps. 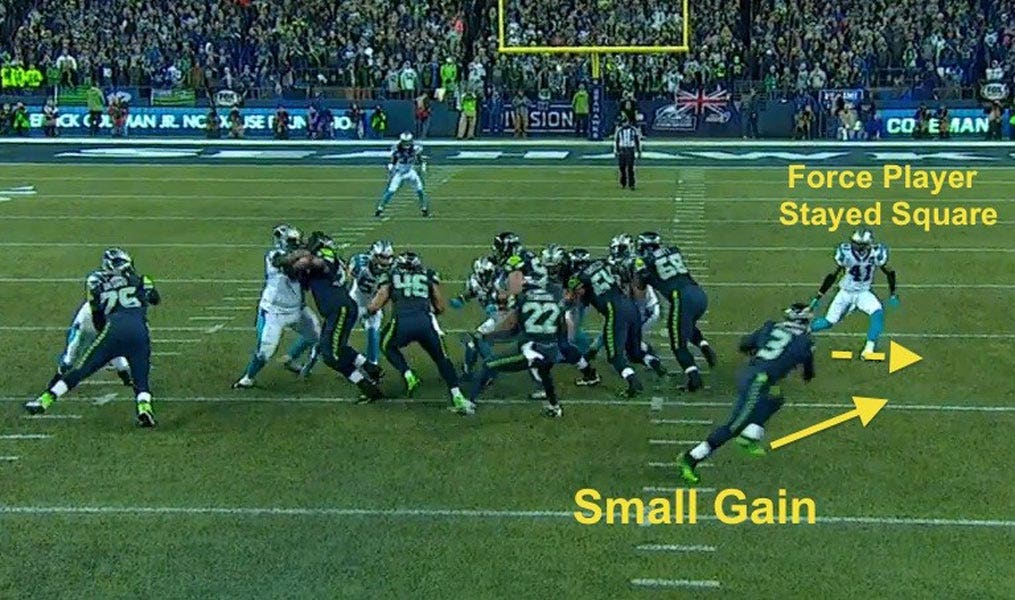 In addition to using proper force and contain techniques on the edges of the defense, the Patriots may also look to contain Wilson with scheme. They’d benefit from employing the use of a spy player — someone assigned to shadowing Wilson in case he takes off scrambling on a designed pass play — especially on third downs.

The Patriots have certainly seen tape of St. Louis to get some tips on containing Wilson on the ground as the Rams held him to only 7 yards and 1.2 yards per rush in their matchup. Let’s use that tape to see how the Rams used a spy to effectively corral Wilson on a third-down play from their Week 17 matchup below.

In the first photo, you can see that the Rams were playing a Fire Zone. There are three deep-third players, and three underneath players — the hook player and two seam/flat players. While there are usually five defenders rushing the quarterback in a fire zone, the Rams did something unique. After initially showing that he’d rush the passer, they pulled the fifth rusher, safety Mark Barron (yellow circle) back to become a spy on Wilson. 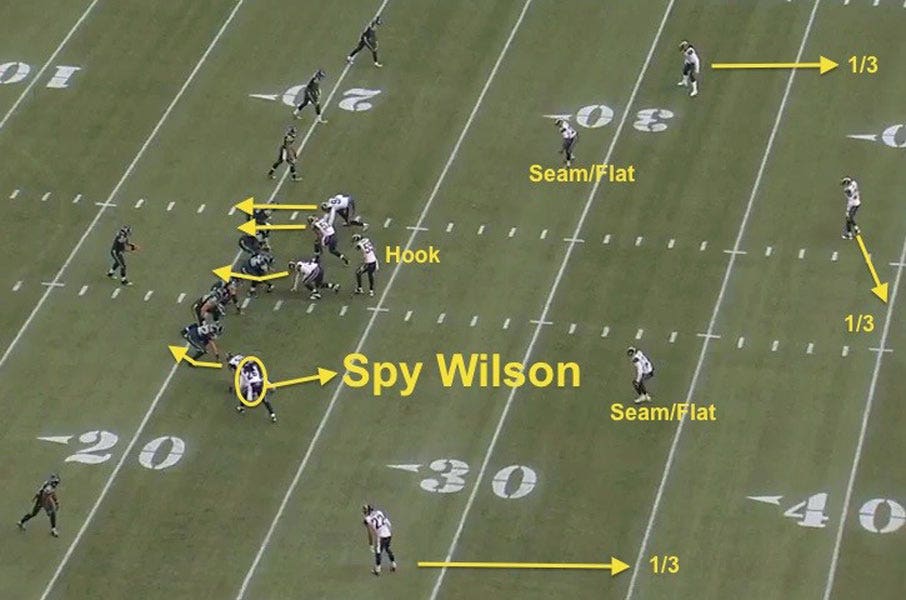 In the next photo, as the play develops you can see that Barron drops back to mirror Wilson after initially showing as if he would blitz. All of the defenders in coverage are in decent position. Wilson will decide to tuck the ball and run.

In the video below, we see the result of this scheme. When Barron — an athletic defensive back here — saw Wilson’s intentions to scramble, he attacked and actually ended up registering a sack on the play.

There’s no question that Russell Wilson is a game-changer with the necessary physical abilities and intangibles to become a back-to-back champion quarterback. He played a pivotal role in the Seahawks’ emotional come-from-behind victory over the Packers in the conference title game and he’s heading into the biggest game of them all with some serious momentum.

During the game, take notice of whether or not the Patriots’ edge players are using proper technique when the Seahawks run the zone-read, and if they game-planned well by using a spy to keep Wilson hemmed up when he scrambles (I’m thinking it will be No. 91 Jamie Collins on most occasions). Being able to account for Wilson’s mobility in the Super Bowl will be a major determining factor in the matchup.