The Seattle Seahawks have "it" again. You watch the tape and they seem to be jumping off the screen, playing at a different speed than their opponents, and oozing belief and confidence.

It’s tough to fathom that Green Bay could fly cross-country and go toe-to-toe with Seattle in front of the 12th Man and edge out a victory given the way the Seahawks have been playing.

But, if any team can, it would be one led by Aaron Rodgers. His performance in the divisional playoff round last weekend against Dallas was both admirable and awesome in light of his injured calf.

Eddie Lacy is running rampant against defenses behind an improved offensive line, and the defense has been wreaking havoc on opposing quarterbacks.

Here are five things the Seahawks must stop against the Packers to keep their run at a repeat alive.

The Packers shredded the Lions, the league’s top rushing defense, on the ground when they ran for 152 yards in the regular-season finale. They also rushed for 119 yards against the Cowboys last week. Establishing and maintaining the run will be vital for Green Bay, but that’s much easier said than done against the Seahawks.

Seattle allowed just 81.5 rush yards per game, good for third-best, but the Seahawks did just let the Panthers run for 132 yards (granted, 37 were by Cam Newton) in their divisional playoff game last weekend.

Over a third of the Panthers’ total on the ground against the Seahawks last week came on draw plays, and the Packers run the draw as well as any team in the league.

Defeating the two-back draw — a play called "Paint" — is fairly simple in theory. As long as the two linebackers (or sometimes a safety) get to the lead blocker properly, there should be a minimal gain. The key for the Packers is fullback John Kuhn. There’s a reason he’s reached Pro Bowl status — the guy is good.

Even when linebackers try to soak up his lead block correctly, he’s able to get leverage on them and create a seam for Lacy. Let’s take a look at how Paint is drawn up.

In the first photo, you can see how the Packers’ two-back draw is designed, and how the Dallas linebackers (white circles) were supposed to fit Kuhn (No. 30) last week. The linebacker to the strong side is supposed to "hammer" the ball back to his other linebacker who, in this play, is the "free hitter" and should make the tackle for a short gain.

In the next photo, notice that the linebacker to the strong side is actually trying to maneuver to Kuhn’s left, attempting to force Lacy inside toward the free hitter. He didn’t, however, and Lacy ran for a big gain. 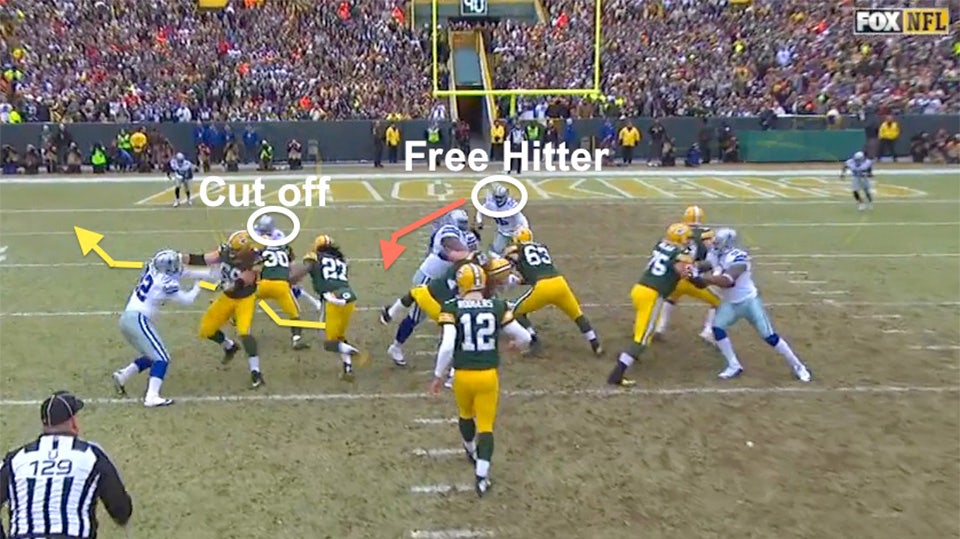 To give us something fun to look — and listen — for in this game, watch this video where you can hear Rodgers’ call to Paint. The key word is "Brush." The Packers may change it up for this game, but it’s doubtful since offenses don’t change their calls as often as you’d think they would.

If the Seahawks are able to get an advantage by picking up on the audible signal or call when Rodgers checks to a draw, or if they simply play the draw correctly, they’ll be much more likely to minimize the damage of one the Packers’ most successful run plays.

Green Bay wide receivers executed outstanding crack-back blocks twice in the opening drive alone against Dallas last week, and it’s a big reason they’ve enjoyed success in the run game in the second half of the season. Randall Cobb (in the slot), Jordy Nelson and Davante Adams (on the edges) all have been outstanding blockers in the run game.

Offenses will build crack-back blocks into their run-game schemes anytime defenses put extra defenders in the box to stop the run. Seattle will load the box often to stop Lacy, especially because they have so much confidence in their secondary to handle the coverage. One of the games within the game to watch this weekend will be who wins the crack-back confrontations — Seattle defensive backs or Green Bay receivers. Let’s take a look at an example of what the Seahawks will see this weekend.

In the first photo, you can see how this lead play is drawn up with the built-in crack-back by Cobb (yellow circle) on the extra safety that is coming down into the box for run support. The safety and the nickel that is covering Cobb (red circles) are the ones who must be on top of their game to minimize the gain. 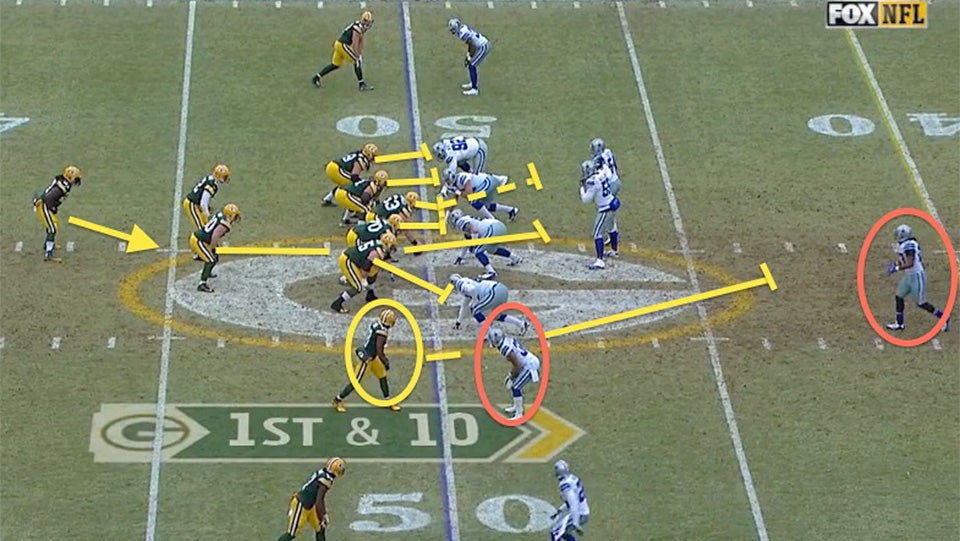 In the next photo, you can see that the safety is about to get cracked by Cobb and you can also see that, as soon as he recognizes it, the nickel back (red circle) should replace the safety in his run fit. He doesn’t. 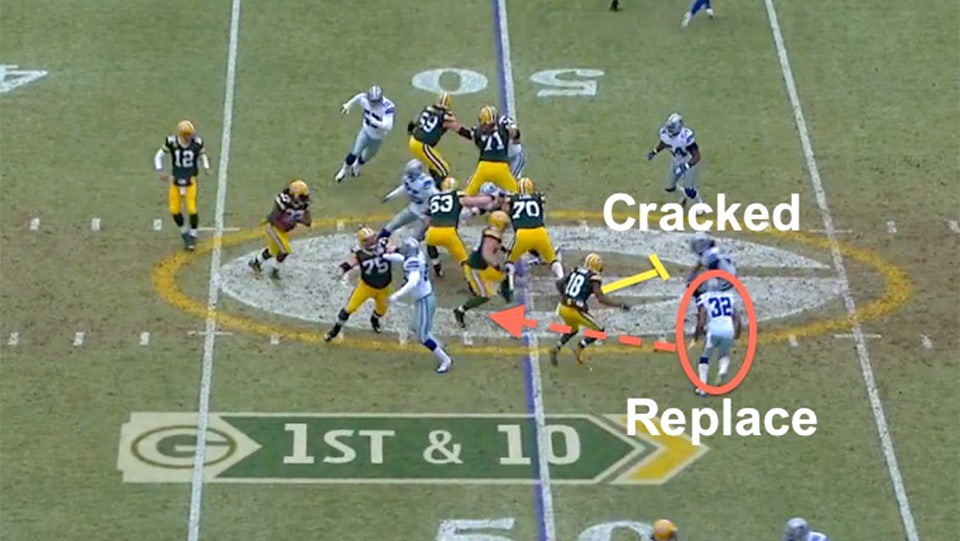 By the time the nickel back finally realized that his man is crack-back blocking on the safety it’s too late. Lacy has a full head of steam and the nickel hasn’t even squared up to make a tackle. Lacy ran for 19 yards on this play because of the nickel back’s mistake.

Seattle defenders must recognize this type of block early in the down so that they can front Lacy up and try to minimize the gain. 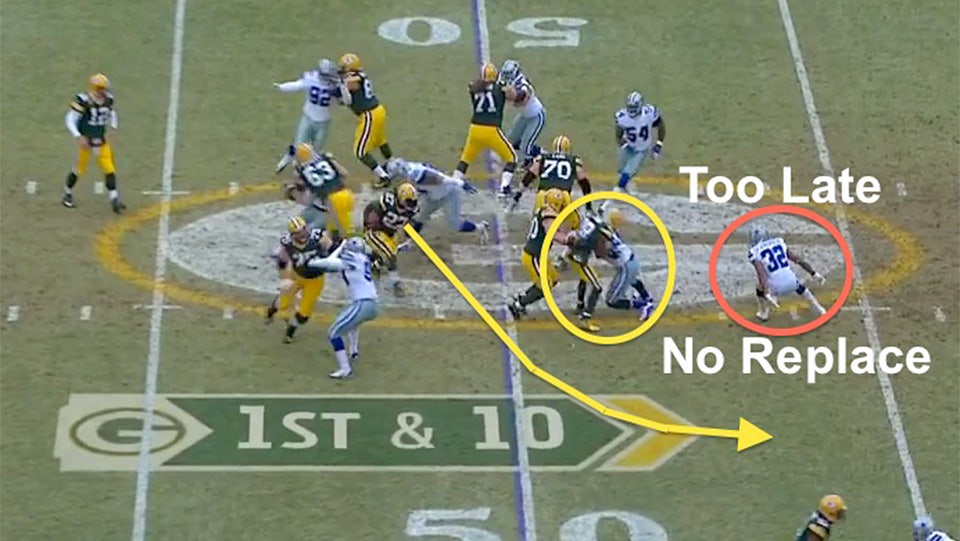 Even the smallest windows are wide open when Rodgers is looking at them. Rodgers is capable of making throws that other quarterbacks are either unable or unwilling to make — and Sherman knows it. Sherman said he watched Rodgers pick apart Dallas’ defense in the divisional playoff round, adding: "There are only a few people who can make that throw, and there’s no one besides Aaron Rodgers who has the balls to even try it." He was alluding to this, the go-ahead score.

Rodgers finished the season with a 112.2 passer rating and is the only player in NFL history to register a quarterback rating of over 100 in six consecutive seasons. The Legion of Boom is well aware that, even when they think they have their coverage responsibilities in check, they need to stay on high alert and be prepared to challenge throws that normally aren’t even attempted.

They must keep their eyes plastered to their man and not look back for the ball until they are certain that there isn’t even the tiniest of window in which Rodgers can put the ball — unlike this Cowboys defensive back last weekend.

BEAT THEM WITH DETAILS

Rodgers understands defensive coverages as well as the defenders themselves. He can spot a breakdown as quickly as any quarterback in the league, so the Seahawks’ secondary will have to be on point. Let’s take a look at a coverage breakdown in Green Bay’s game last week against the Cowboys that Rodgers exploited and turned into a touchdown.

In cover 2-man, the underneath coverage defenders must keep inside and underneath leverage as the two deep safeties are giving them help outside and over the top. They must force the ball to be thrown to the outside — force the long throw. Here’s how it’s drawn up.

In the next photo you can see that the two defensive backs to the left side of the screen are maintaining good position on their responsibility — if they’re going to get beat, they can only get beat to the outside, which is the longer and more difficult throw for Rodgers. The defenders on the right, however, both got beat off the line of scrimmage and are in bad position. The receivers now have easy access to the inside of the field, which is left wide open — and Rodgers sees it. 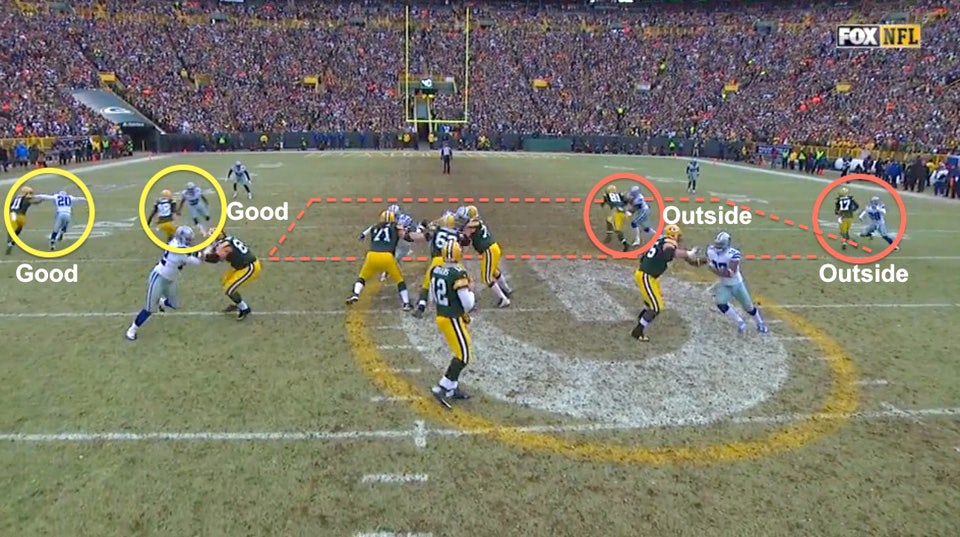 In the photo below, you can see that Rodgers put the ball right on the money after he recognized that Davante Adams had beaten his man to the inside. 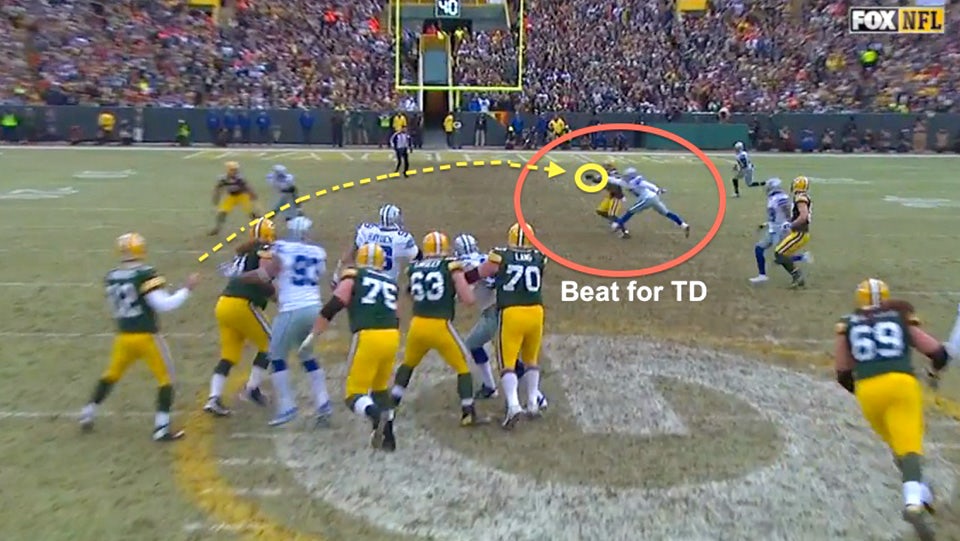 This play resulted in a huge touchdown for Green Bay that cut Dallas’ lead to 21-20. It could have been prevented if the defender simply maintained his inside leverage. This is exactly what Seattle’s secondary must do this weekend to ensure that they don’t give Rodgers any easy pickups.

In terms of rushing opposing passers, the Packers defense has turned up the heat. In their last three regular-season games, the Packers defense had 12 sacks (tied for third-most in the NFL during that span) and 23 quarterback knockdowns (tied for fifth). They started the postseason on fire as last week against the Dallas offensive line — arguably the best in the NFL — as they racked up four sacks and eight pressures on only 19 pass attempts.

Clay Matthews Jr. leads the charge, but Julius Peppers has turned it up a notch — he was flashing throughout the entire game last week. The Seahawks offensive line, specifically the guards, will have to be on top of its game against one of the best pass rushers in NFL history. The Seahawks’ guards will have to be on high alert when Peppers lines up inside at the "3-technique" position. When Peppers is inside, the Packers design their rush to give him extra room to work one-on-one against a guard.

In the first photo you can see the design of the pass rush: It opens up space for Peppers to work against the guard. 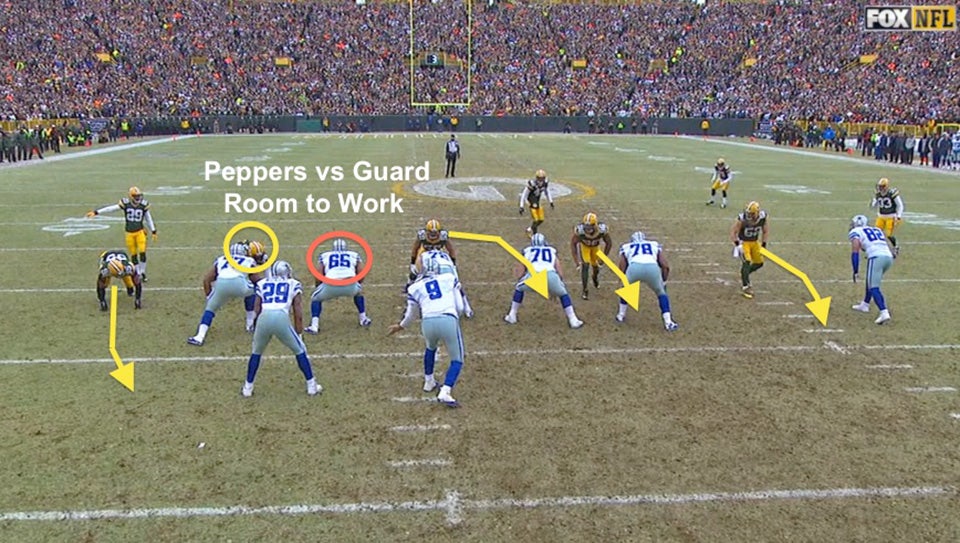 In the next photo you can see the space that is created when the ball is snapped. Peppers has spent most of his career going against offensive tackles, who are almost always the team’s best pass protectors, but with this scheme he gets more than five yards of space to set up his moves against a guard.

The Seahawks may consider using a running back to help the guards when they see Peppers aligned over a guard. Dallas could have prevented what you see in the next photo, as DeMarco Murray could have chipped Peppers before releasing on his route. One way or another, the Seahawks would benefit from game-planning for when Peppers aligns over a guard. 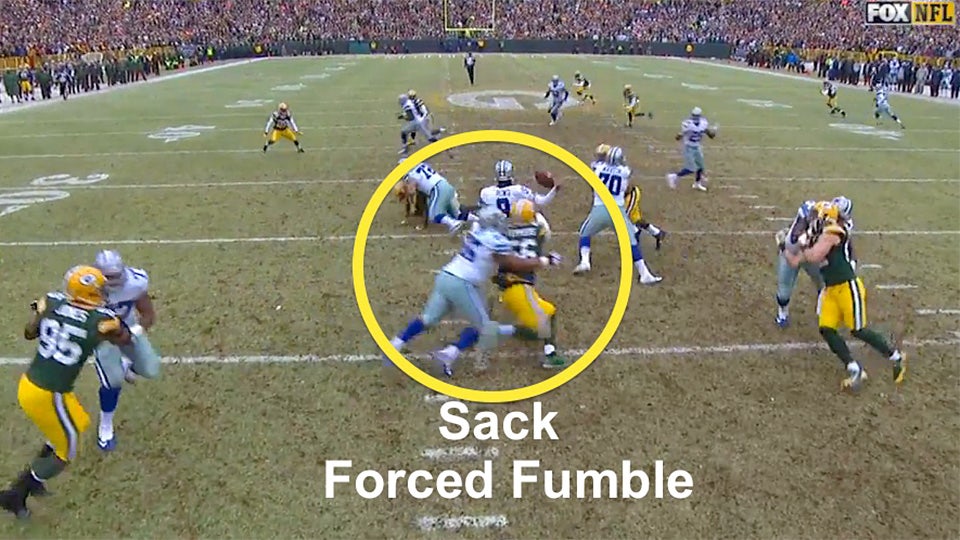 The Packers just defeated an impressive foe in the Cowboys, who hadn’t lost a road game all season, including a matchup against the Seahawks in Seattle. If any team has a shot at taking down the red-hot Seahawks, it’s Green Bay.

But if the Seahawks can learn from Dallas’ mistakes, and do what they do best (play great, disciplined defense), they’ll be defending their title in Glendale.