Three things Cowboys can do to beat the Packers, continue Super Bowl run

The matchup between these two teams is like a collision between fire and ice.

Green Bay is humble, hungry and undefeated at home (8-0) while Dallas is showy, driven and undefeated on the road (8-0). The Packers, a steady perennial power, have been in the playoffs six straight seasons.

The Cowboys, however, hadn’t been in the playoffs since January 2010 — but they’re one of the hottest teams in the NFL now. Dallas isn’t being given much of a realistic shot to go to Lambeau and win, but if you take a closer look, there are reasons why the Cowboys can have success and pull the upset.

As different as these teams may appear, there are some similarities. Both teams finished the regular season with 12-4 records and were led by offenses that were among the best in the league.

Their run games were mirror images of each other by season’s end — both teams finished the month of December averaging exactly 152.5 yards per game. They have the No. 1- and No. 2-rated passers in the league. Tony Romo finished first in the league with a 113.2 passer rating, while Aaron Rodgers was right behind him at 112.2.

Neither defense was dominant, but each did enough to get its team wins and each got better as the season progressed. The Packers finished the season ranked 13th in the league in points per game allowed (21.8) while the Cowboys (22 per game) weren’t far behind. Both were opportunistic, too, as each finished the season with 18 interceptions.

But the main thing these teams have in common is that they’ve battled their way into the NFC divisional round of the playoffs, and we’re fortunate enough to watch what undoubtedly will be an epic battle on the frozen tundra.

It’s tough to imagine the Packers losing this game at Lambeau Field, where Rodgers has been so dominant. Rodgers is 10-1 lifetime when facing defensive coordinator Rod Marinelli, with a .670 percent completion percentage and a 104.2 quarterback rating, too.

But going undefeated on the road like Dallas did this season is wildly impressive and I certainly wouldn’t put it past the Cowboys to win this one. Here are three things the Cowboys must do if they’re going to topple the Packers and keep marching toward the Super Bowl.

Protect against pressure from Packers

Green Bay’s pass rush has developed in its past three games . In Weeks 15 to 17, the defense racked up 12 sacks — third most in the NFL in that span. Don’t forget 23 quarterback knockdowns, which tied for fifth. The NFL is a copycat league, so when a team sees something on tape that works against an upcoming opponent, it will add it to its repertoire.

Dallas gave up 30 sacks in the regular season, but the Lions were able to sack Romo six times in a wild Dallas win last weekend. Dallas’ vaunted offensive line features three Pro Bowl players and vaunted first-round picks, but the Cowboys’ pass protection was exposed last weekend and they put some weaknesses on tape.

Here is one of the blitzes drawn up by Detroit that surely will be mimicked by the Packers, who were tied for ninth in the NFL with 41 sacks on the season, led by sack-masters Clay Matthews Jr. and Julius Peppers. Look for this scheme to show up early in the game, most likely on a third-down play.

In the next photo, you can see that the Cowboys had a play-action pass called and you can see how the rush lane is starting to open for Detroit because the Lions had the offense outnumbered to the weak side of the formation. 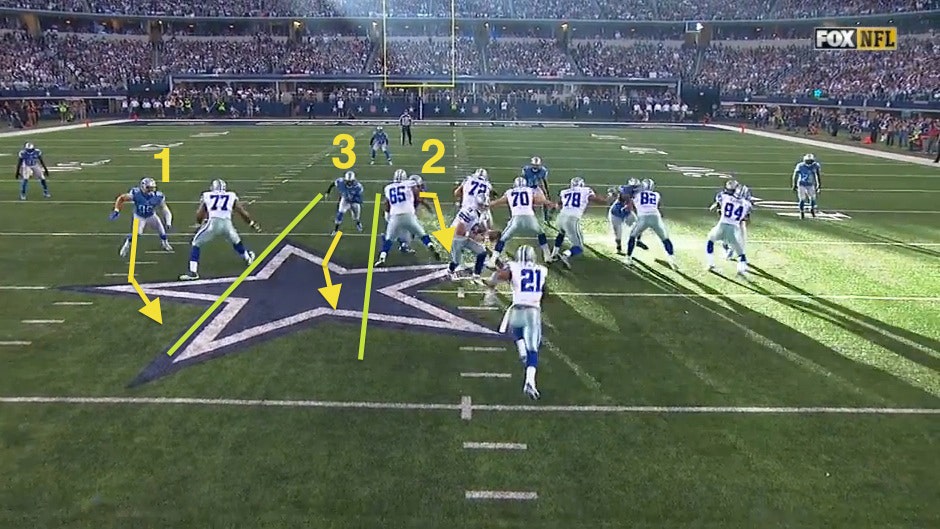 In the final photo, you see the result of the play. It’s likely that the running back was at fault for this sack. Running backs are assigned to pick up certain linebackers on play-action passes if they blitz, and it looks as if the back here should have picked up the Mike linebacker who blitzed to the weak side of the formation. He didn’t, so we can count on the Packers running this blitz in the game this weekend to see if the Cowboys have corrected the issue. 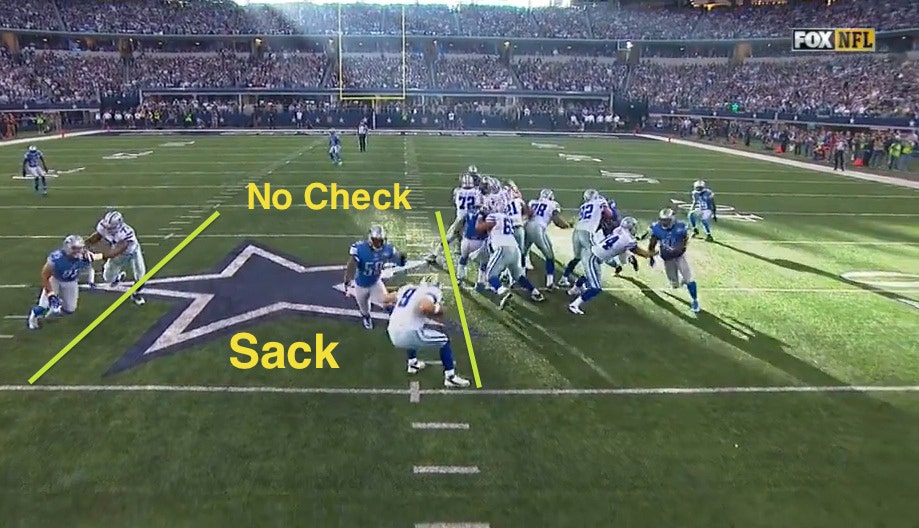 Let’s take a look at another one of the reasons Detroit was able to generate so much pressure on Romo in the wild-card matchup last weekend.

Bryant struggled to get off of press coverage as he was jammed successfully and often in the game. Bryant was often Romo’s first read in his progressions, but because he wasn’t able to get off the jam, it forced Romo to sit in the pocket longer and work through his progressions. This gave the Lions’ pass rush more time to get home. Bryant’s struggles against press coverage in that game also were a big reason why Bryant was targeted only three times and finished with three receptions for 48 yards.

It’s vital that Bryant gets back on track this weekend so that the rhythm of the offense can get back on track, too. Here’s one example of the physical nature with which Detroit defensive backs played against Bryant, and why the Cowboys could be in trouble if Bryant doesn’t have more success against Green Bay’s press coverage this weekend:

Just as the Packers’ defense surely will try to jam Bryant, who led the NFL with 16 touchdown catches in the regular season, so should the Cowboys’ defense against Jordy Nelson. They must account for Nelson, who finished tied for second in the league with 13 touchdown catches. He had six catches for 86 yards in the Packers’ last outing against the Lions, and he set a franchise record with 1,519 yards this season.

Look for the Cowboys to use the same game plan to account for Nelson that they used against Calvin Johnson last week. Johnson was targeted eight times and finished with five receptions for 85 yards. The Cowboys used Cover-6 as one of the methods to disrupt him and jam him at the line of scrimmage while putting a safety over the top. Cover-6 is a double-coverage consisting of Cover-4 on one half of the field and Cover-2 on the other.

Here’s what it looked like against Johnson and the Lions, and what we’ll likely see from the Cowboys this weekend to disrupt the productivity of Nelson: 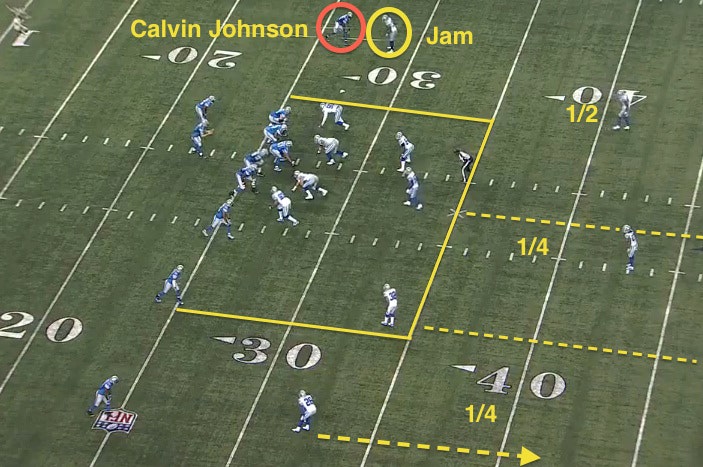 In the first photo at the top of the screen, you can see that Dallas has a cornerback rolled up to jam Johnson. There is a half-field safety over the top for help. The other safety and the corner at the bottom of the screen each play deep quarters to the other half of the field. The three defenders in the box are responsible for short routes: the flats and the middle hook. 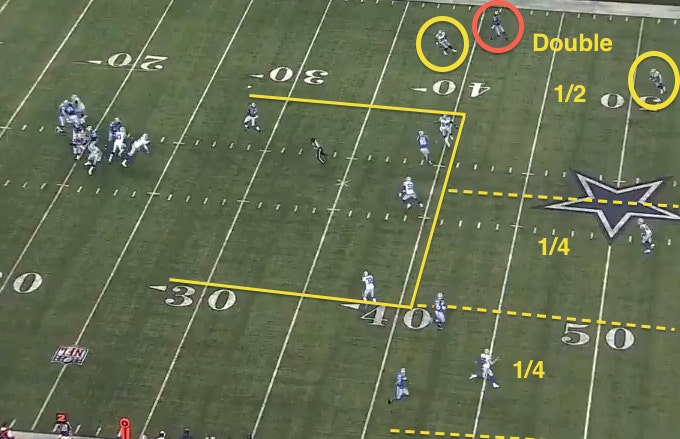 In the last photo you can see what the coverage would look like on Nelson this weekend (red circle). The corner plays inside and underneath aggressively, knowing that he has the half-field safety over the top to create the double team. This coverage isn’t a cure-all against the Packers, though; they have arguably the best slot receiver in the league in Randall Cobb. This coverage essentially would put Cobb in a one-on-one situation against Orlando Scandrick this weekend. That likely will end up being the key mathchup to watch in the passing game.

There are several other keys for the Cowboys, like stopping Eddie Lacy, who leads a ground game that averaged more than 140 yards in the second half of the season.

But the games within the game that we looked at above likely will play pivotal roles in determining the winner. If the Cowboys can clean up some of their pass protection issues from last week, get a better version of Bryant against press coverage, and game plan to take away Nelson, it will give Dallas its best shot at doing what no other team has done this season: beat the Packers at Lambeau Field.