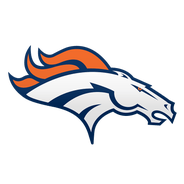 Sutton continued his climb to a true WR1 with an impressive sophomore campaign, improving across statistical categories. Concerning, however, was the fact that his numbers, much like the end of 2018, fell off in the absence of Emmanuel Sanders. In seven games with Sanders opposite him, Sutton averaged 5.1 catches on 7.7 targets per game for 80.6 yards and 0.4 touchdowns. In nine games without Sanders, Sutton averaged 4.0 catches on 7.8 targets per game for 60.9 yards and 0.3 touchdowns as pass defenses shifted heavily toward him. Sutton definitely has the ability to be a dominant receiver -- diving touchdowns over the likes of Denzel Ward and Casey Hayward come to mind -- but the drop-off warrants consideration. The fact that eight of those Sanders-less games were played with quarterbacks making their first career starts doubtlessly impacted Sutton's statistics, but the differences also show a real need for Denver to acquire a strong WR2 opposite Sutton in the offseason. Assuming Denver acquires that receiver, along with the continued development of the likes of Noah Fant and DaeSean Hamilton, Sutton could be a darkhorse potential top-10 receiver in 2020.