It didn’t take long for Michael Jordan to get that itch again.

His time away from the game was short-lived, just like the fax that signaled his return to the game: 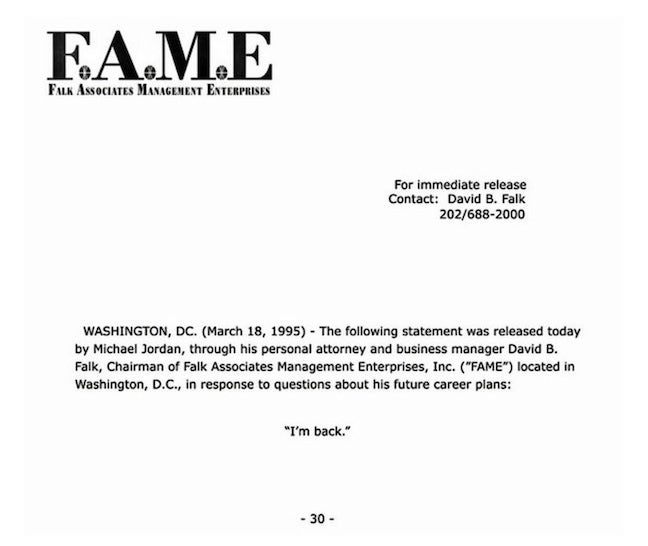 Today marks the 25th anniversary of Michael Jordan's return to the NBA.

From purchasing a $20,000 golf club membership, to announcing his return to the game with a two-word fax. via @NBCSChicagohttps://t.co/tX3VxJHDOP

At the time of his 1993 retirement – the first of two retirements – Jordan was at the top of the world, having just won his third consecutive NBA title with the Chicago Bulls.

But a lack of desire to play the game, coupled with the death of his father, caused MJ to call it quits.

However, during his retirement, Jordan still made headlines. He signed a minor league deal with the Chicago White Sox in February of 1994, in an attempt to pursue a baseball career.

Jordan intrigued the world with the crossover attempt, but in his mind, it soon became clear that he had unfinished business in the NBA.

In other words, that itch came back.

His first game came a day after his announcement, when he suited up against the Indiana Pacers on March 19, 1995.

He scored 19 points, and finished out the season playing 17 regular season games.

He also played in 10 playoff games that season.

The Bulls lost to the Orlando Magic in the Eastern Conference Semifinals in six games that season, but Chicago returned to the promised land the next season to win Jordan’s fourth NBA title, defeating the Seattle Supersonics in six games.

Next season, he won his fifth, defeating the Utah Jazz in six games.

The following season, his sixth ring came after once again defeating Utah in six.

Michael, just so it’s out there: if you wanted to return again today, we’d have you.