For the first time in years, parity is back in the NBA – and we’re all giddy about it

When the Los Angeles Lakers met the Milwaukee Bucks back in December, Giannis crowned himself after defeating the King.

Giannis knocks down his 5th 3 and he wants the crown. pic.twitter.com/oqFrDCiYjm

But on Friday night, LeBron James stole it back with a victory of his own.

And then, following another big victory on Sunday over the Clippers, he was actually crowned.

The crown doesn’t just represent the debate over who is the NBA’s best player, but signals a larger conversation regarding which is the best team in the league.

For the last five years, there’s been one team ruling the West, The Golden State Warriors, and before last season, the team with the aforementioned James ruled the East.

But that brings us to the 2019-20 season, where a disbanded Warriors squad sits in last place in the West (and the league) and LeBron plays in the West.

Welcome to the Parity Party.

We have no clue who is going to win the NBA championship, and that means the NBA is fun again.

Of course, some top contenders have emerged, including the teams we mentioned earlier. 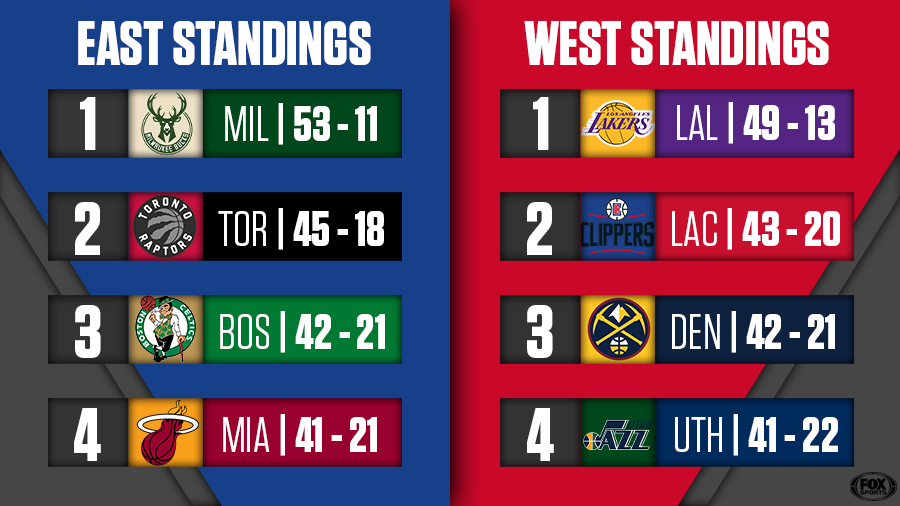 Milwaukee with Giannis Antetokounmpo – the favorite to win back-to-back MVP titles – sits atop the East and has showed little sign of slowing down.

"The Bucks can be 1 of the 7 greatest teams in NBA history. If they win 70 games, Giannis wins MVP & they win the title, they are on the list w/ the '86 Celtics, '96 Bulls. … But they still have the most to prove. Tonight, the game mean more to Milwaukee." — @getnickwright pic.twitter.com/lvhprwB3fL

March hasn't been kind to the Bucks:

The East is apparently up for grabs.

Could the reigning conference champion Toronto Raptors make a repeat trip to the Finals?

The Raptors clinch their 7th straight playoff berth. It's the earliest they've clinched in franchise history.

Out West, the hottest topic has been which team runs LA, the Lakers or the Clippers. But let’s be honest: whichever runs LA will run the West.

"The Lakers had to win this game. It was a statement game. The Lakers wanted to win this game, they wanted to shut the Clippers up. … LeBron hit first. AD is having an MVP season. LeBron and the Lakers aren't in this position without AD." — @DaTrillStak5 pic.twitter.com/xagbDVdPR2

Yes, the Lakers are in a great spot with wins over the Bucks and Clippers in three days. It’s the first time they’ve defeated two of the top four teams in the NBA in back-to-back games since Feb. 5, 2009.

But, nothing is guaranteed, and there are sleeper squads champing at the bit.

Mountain Mike with quite a week over the teams' 4-game road sweep:

The Jazz are dangerous with Mike Conley as their conductor, having won five straight, including four straight on the road.

Their biggest win came on Friday night in Boston, with Conley putting up 25 points, 5 rebounds and 3 assists – the most points he’s scored since November.

Indeed, March Madness seems to have crept its way into the NBA.

The madder the better.