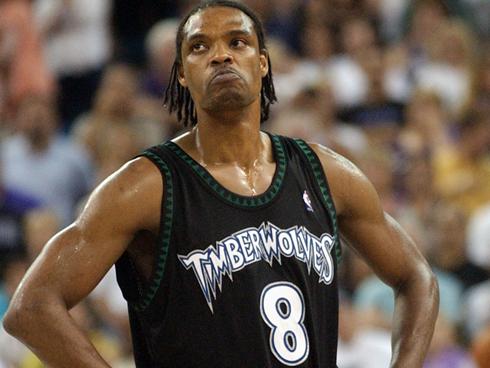 Latrell Sprewell was a four-time All-Star who played 13 NBA seasons for the Warriors, Knicks and Timberwolves, but most fans will remember him for one thing and one thing only: choking his head coach at practice.

Sprewell committed the act while playing for Golden State in 1997, choking then-head coach P.J. Carlesimo, and returning to the practice court 20 minutes later to try to throw some punches. The NBA suspended Sprewell for a year for the incident, the Warriors terminated his contract, and he signed with the Knicks once his suspension was finished the following season.

The folks at Priceline have brought Sprewell back into the spotlight by featuring him as the punchline of a new commercial, where he’s shown giving a young child some questionable life advice.

Sprewell is also famous for turning down a contract extension while in the final year of his deal with Minnesota, saying that an offer of $30 million or so over three seasons was insulting because he had his family to feed. It’s good to see he has a sense of humor about how he was perceived during his time in the league all these years later.