We’re past the midway point. The end is in sight.

ESPN aired the fifth and sixth installments of its 10-part docuseries The Last Dance on Sunday night, and once again, fans relished in learning more about the Chicago Bulls’ march to their sixth championship in franchise history.

Here are five things we learned from Episodes 5 and 6:

1. Michael Jordan was intrigued by a young Kobe Bryant – but not yet impressed

Episode 5 was dedicated to the late Kobe Bryant.

The first few scenes of Episode 5 chronicled Michael Jordan’s final All-Star appearance as a member of the Chicago Bulls in 1998. The game was held in Jordan’s favorite arena – Madison Square Garden – and it featured the youngest starter in All-Star Game history, Kobe Bryant.

Clearly, Jordan and Bryant were not yet close friends, and Jordan was critical of Bryant in the Eastern Conference locker room prior to tipoff, referring to him as “that little Laker boy.”

MJ knew what Kobe was about before the 1998 All-Star Game even started. #TheLastDance pic.twitter.com/mm8XlShwwI

Jordan ended up winning the All-Star MVP award – which today is called the Kobe Bryant MVP Award – but Kobe strutted his stuff as well.

Kobe put on a show, but Mike won the game AND MVP honors in the 1998 All-Star Game in MSG 🐐🐍 #TheLastDance pic.twitter.com/eQ7h6Od9TT

There wasn’t a memorable moment between the two that emerged from the game, but it did serve as a jumping off point for the brotherly bond that developed between the two superstars.

The Last Dance director Jason Herir expanded on their relationship.

"This really was a brotherly relationship."#TheLastDance director @jasonmhehir talks about the bond between MJ and Kobe. pic.twitter.com/o5UA0UQLgs

It was a bittersweet moment for all, seeing Bryant on the screen after his passing on Jan. 26.

2. Michael was the superstar of superstars

Of course, we all know Prince loved basketball.

But that didn’t make it any less cool to see footage of him and other celebrities courtside at Bulls games.

Indeed, Michael Jordan was arguably more a rockstar off the court than he was on the court, and the greatest athletes and entertainers in the world made it a point to see him play live.

He was your idol’s idol.

"I want to be like Mike also"
– Jerry Rice#TheLastDance

And, Jordan had some unique relationships, ones that you might not have expected him to have.

Michael Jordan and Jerry Seinfeld having a conversation about nothing. #TheLastDance pic.twitter.com/8TD2soaGo8

However, Jordan didn’t just bring out the famous faces – he brought out the world.

Case in point: On March 27, 1998, the Bulls traveled to Atlanta to take on the Hawks. The game was held in the Georgia Dome and set the all-time NBA attendance record, with 62,046 fans on-hand.

I was in the Georgia Dome with my dad that game in 1998, couldn’t see half the court, but got to see Michael Jordan play.

It’s one of my best sports memories. #TheLastDance

Furthermore, we learned that Jordan couldn’t walk down the street without being surrounded by the adoring public.

We all imagine what it’s like to be a celebrity, but on Sunday, we got to see what it was like to be the world’s most recognizable celebrity – and by ’98, Jordan was tired of it.

"I'm ready for getting out of this life. You know when you get to that point. I'm there."

Mike knew it was time to retire in 1998 #TheLastDance pic.twitter.com/GnUMgex6XQ

3. Gambling was a lifestyle for Jordan

This skilled gentleman appeared to be one of Jordan’s locker room gambling buddies – but he was far from Jordan’s only gambling buddy.

We learned last night that Jordan’s gambling hobby became so prominent during his career that former NBA commissioner, the late David Stern, launched an investigation into it and Jordan took it upon himself to address it in the media.

In an interview with Ahmad Rashad, a sunglassed Michael Jordan said of his gambling, “I enjoy it. It’s a hobby. If I had a problem, I’d be starving. I’d be hawking this watch and my championship rings. I would sell my house … I do not have a problem.” 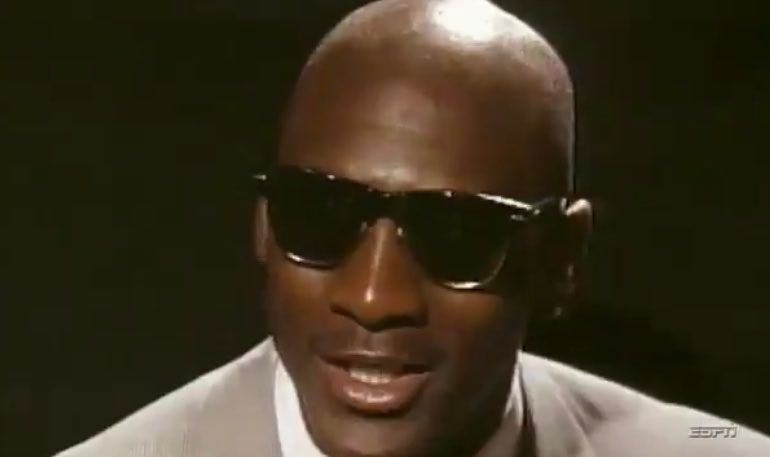 Might not have been the best look for the interview, but the point was clear: Jordan didn’t believe he had a problem.

We also learned of his gambling relationship with a man named Slim Bouler, whom Jordan once paid $57,000 in gambling debts, and Jordan’s former golf pal Richard Esquinas, whose book, Michael & Me: Our Gambling Addiction, posited that Jordan lost over $1 million betting on golf.

In short, MJ liked to put his money where his mouth was.

Back to our guy John Michael.

Pretty funny that in an epic documentary about Michael Jordan’s drive to win at all costs we learn about him taking L’s to Slim Bouler and Richard Esquinas in golf and to John Michael Wozniak in quarter-tossing https://t.co/IOuJeHUDUY

4. Jordan and Pippen terrorized Toni Kukoc in the ’92 Olympics

It’s been well-documented that Jordan and Scottie Pippen were not fond of Bulls General Manager Jerry Krause. And any opportunity they had to stick it to Krause, they took it.

Enter the 1992 Summer Olympics in Barcelona.

Krause was a vocal lover of Croatian superstar, Toni Kukoc, whom he dubbed “the future of the Chicago Bulls.”

Ahead of The Last Dance tonight on ESPN, here's what Toni Kukoč's Scouting Video would have looked like. Kukoč was built for the modern NBA w/ his versatility @ 6-10. Would have loved to see him in this era. Still underrated stateside. Helped pave the way for today's Euro stars. pic.twitter.com/viepNW3nhi

However, Jordan and Pippen were the present. And they wanted to deliver a message to Krause about the future.

MJ and. Scottie Pippen were all over Toni Kukoc in the Olympics. They had no love for him because Bulls GM Jerry Krause loved Kukoc so much.

In the Dream Team’s first matchup with Croatia in the 1992 Olympics, Jordan and Pippen took it upon themselves to hold Kukoc to 4 points – but they said it wasn’t personal towards Kukoc.

It was all about Krause.

The Dream Team and Croatia would face off again in the gold medal game, and Kukoc would perform better, scoring 16 points. He would then join the Bulls in 1993 and play seven seasons in Chicago, winning three titles alongside Jordan and Pippen.

And this is why Toni Kukoč was called “White Magic” & “The Waiter”#TheLastDance
pic.twitter.com/eTaDVWKwe1

5. That Dream Team really was something

Remaining on the topic of the 1992 Dream Team, what a collection of talent and personalities.

Sunday, we learned that the Dream Team practices were in fact more competitive than the Olympic games.

The starting lineups from the greatest basketball game never seen.

Who would win a 7-game series? Jordan or Magic's squad? 🤔 pic.twitter.com/wpqq8SS7QL

And apparently, Magic’s squad was getting the best of Jordan’s – then, Michael Jordan became Air Jordan.

Magic broke the whole thing down on Monday morning.

“I’ve never seen a man take something so personal and then just go out there and take that scrimmage over.”

"He says, 'guys, there's a new sheriff in town.'"@MagicJohnson describes the moment he knew the torch was being passed to Michael Jordan as the best player in the NBA 😂 pic.twitter.com/rDbi0dscSF

Consensus opinion is that the Dream Team was the best team ever assembled.

The highlights support that narrative.

Last thing we learned regarding the Dream Team is that Jordan – so he claims – had no say in Isiah Thomas being left off the team, and he even showed Thomas some love.