Lakers: 3 Takeaways From the Preseason Opener vs Kings 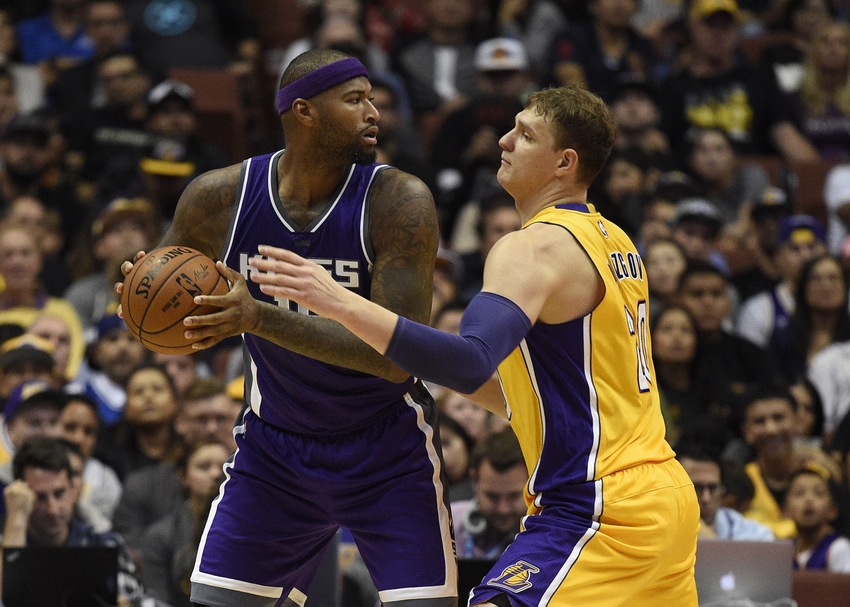 Following a 103-84 win over the Sacramento Kings, the Los Angeles Lakers can take a handful of things away from their preseason opener.

The first game of the Luke Walton era tipped off Tuesday night against the Sacramento Kings and the Lakers left the Honda Center in Anaheim with a win after a late push in the fourth quarter.

In their 103-84 win over Sacramento, the Lakers played solid defense post halftime after struggling to get shots to fall in the first half.

Their defense was so strong that the Kings only scored 32 points the entire second half, while the Lakers score 39 points in the fourth quarter alone. That combined with the fact that Kings head coach David Joeger, also making his debut with his new team, didn’t play any of his starters in the second half.

Regardless, the Lakers effort on defense in the second half was promising, especially for a team that finished dead last in defensive efficiency last year, per Basketball Reference. While there were a number of new faces on the Lakers roster making their debut last night, it was the familiar faces that made the biggest impact on the game.

Tarik Black and Larry Nance Jr. Proving Their Worth If Luke Walton is going to continue to emphasize defense this season, Larry Nance Jr. and Tarik Black should see a ton of playing time.

Going into training camp, there was some speculation around who will come off the bench for the Lakers, particularly in the frontcourt.

Larry Nance Jr., Thomas Robinson, Tarik Black, Travis Wear, Yi Jianlian, Zach Auguste and Ivica Zubac are all fighting for a spot in the rotation, and six of them got the chance to show their stuff Tuesday against the Kings.

Black, who struggled to find a spot in Byron Scott’s rotation last season, had a monster game, finishing with 15 points on 5-5 shooting and 5 rebounds in his 16 minutes of playing time.

Tarik Black gets the steal and layup, plus the foul, to give the Lakers the lead. #GoLakers pic.twitter.com/ynqpASSXV0

Earlier in the season, head coach Luke Walton promised the former University of Memphis product a “fair shot” at cracking the rotation. Walton spoke to the media about his role with the team going forward after his breakout game.

“We’re still figuring all of that out,” Walton said. “Honestly, we don’t know. We’ll see. We’ll keep trying different lineups, but he definitely helped his case tonight the way he played.”

Black isn’t the only returning Laker that should be featured in Walton’s rotation. Nance also had a huge impact on the game defensively in the second half.

Nance was tasked with guarding Sacramento Kings’ superstar DeMarcus Cousins on several possessions and did a really good job at doing so. His reputation as a defensive stopper has only grown since last summer, as has his ability a scorer.

While Nance is known for his poster dunks, he showed patience on the offensive end last night. While he only finished the night with 9 points, 4 rebounds, 2 assists and 2 steals, his presence on both ends of the floor was key to the Lakers win.

Expect both of those players to see the floor together a lot this season.

Next: Jordan Clarkson's Defense Is Much Improved After being a liability on defense the past two season, Jordan Clarkson showed he’s ready to take the next step.

To the surprise of Lakers fans everywhere, Jordan Clarkson started the game on the bench Tuesday against the Kings.

Clarkson was considered a lock as the Lakers starting shooting guard considering the lack of talent they have at the position. Not only that, but Clarkson is a  pretty good basketball player, per sources.

My sources are my eyes.

In his 20 minutes on the floor, Clarkson scored 12 points and grabbed 6 boards, the most rebounds by any guard that played that night.

While his 12 points aren’t eye dropping, Clarkson provided much needed offense to a team that couldn’t get the lid off of the basket in the first half of the game.

However, his offense wasn’t his biggest contribution on the court last night, which is a first for Clarkson. His perimeter defense was a huge reason the Lakers were able to climb their way out of a double-digit deficit in the second half.

After reportedly working on his defense all summer, Clarkson looked great against the Kings, and we’re not the only ones that think so.

Clarkson has been his own worst critic, admitting to the media in Santa Barbara he was “just terrible on that end of the floor” last season.

If Clarkson can continue to improve on the defensive end, his bench role will surely be short lived.

Next: Brandon Ingram Is Still A Rookie As fans learned last year, even the No. 2 overall pick in the draft is going to need some time to shine.

Anyone expecting Brandon Ingram to go off for 81 points in his first game with the Purple and Gold was thoroughly disappointed, as the rookie finished the game with only 2 points on 0-5 shooting in his 27 minutes of play.

His 2 points came from a pair of free throws, another area where he struggled only making 50 percent. All of this is  to expected of a rookie, even he was taken with the No. 2 pick.

However, Ingram wasn’t unwatchable as he made his presence known on the defensive end with his long 7’3 wingspan.

That block was Ingram’s lone highlight of the night, but he doesn’t care as long as he is making an impact on the game.

With some big blocks today, Brandon Ingram says he wants to “affect games in different ways.”

Ingram will come off the bench to start the season, as we saw yesterday, and that’s likely where he will stay unless his shots start falling.

Yes, he is expected to struggle early on, but if he fails to make any contribution with the second unit, who led the charge to the win last night, he might see his playing time drop even more.

Anthony Brown, who also plays small forward, shot a perfect 4-4 from the field in the dying minutes of the game. Brown was drafted with the hope that he could be the prototypical “3-and-D” guy the Lakers desperately need.

Brown has the advantage of already having a year in the NBA under his belt, and being for years older than Ingram. Ingram has already made it clear that he hopes to crack the starting lineup this season, but he has to earn it.

Ingram and the rest of the team will have another opportunity to showcase their talent next game against the Denver Nuggets, Friday at 7:30 p.m.

Next: 3 Things To Watch for in the Lakers Preseason Opener

This will be Ingram’s first time playing in front of the home crowd at Staples Center, so hopefully that motivates him and the team to play their best basketball of the preseason.