When Andrew Wiggins was drafted No. 1 by the Cleveland Cavaliers in 2014, he was expected to be a franchise-altering talent that would develop into a perennial All-Star.

Six years later, Wiggins is now a member of the Golden State Warriors, and the expectations couldn’t be further from where they were when he entered the league.

The Warriors & Timberwolves have agreed on a trade centered around D'Angelo Russell & Andrew Wiggins. @ColinCowherd reacts to the deal: pic.twitter.com/5Ruu9Y8Ypb

But if he proves to be the right fit, Wiggins has a second chance to prove his worth, salvage his legacy, and extend the Warriors’ title window, all at once.

It’s unfair to call Wiggins a bust. He’s proven to be a capable scorer and he won Rookie of the Year in 2015. 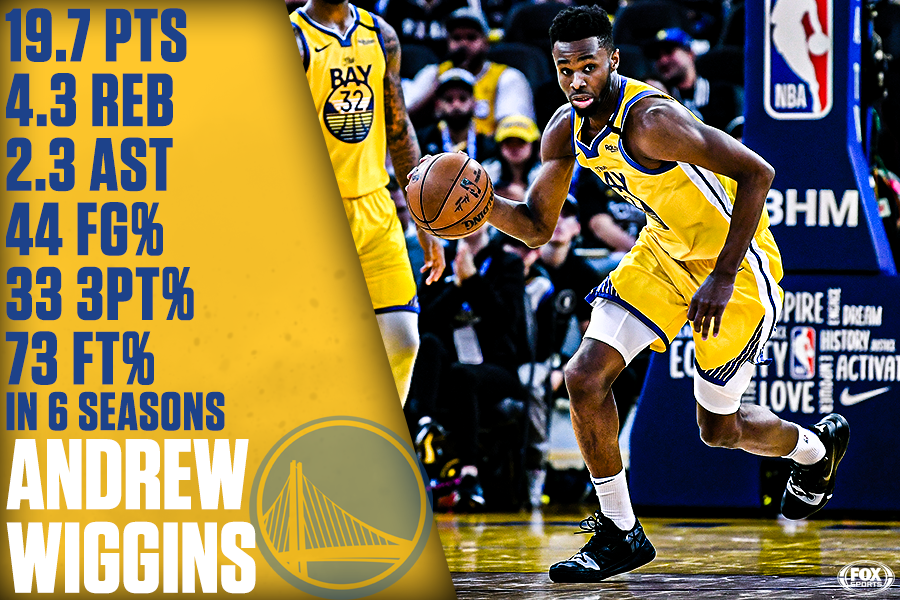 His career numbers aren’t anything to sneeze at, but there has always been a belief he could offer more, considering he has yet to make an All-Star appearance and has only made one playoff appearance.

Now, he joins a championship core of Steph Curry, Klay Thompson, and Draymond Green, a group that when healthy could contend for the Western Conference crown without Wiggins.

"I love our colleague @getnickwright, but I don't know what he was thinking when he killed this Andrew Wiggins trade. This was a darn-near home run. They'll have a legitimate chance to win the West and win a championship again." — @Chris_Broussard pic.twitter.com/nToxseagDX

Why is Broussard referencing Nick Wright, you ask?

"Andrew Wiggins is a bad basketball player. He's owed $95M over the next 3 years, starting next year. It's unspeakable the Warriors did this. … It's over for them now. We will never see Steph in another NBA Finals again. Ever." — @getnickwright pic.twitter.com/mqu5qkEYm9

It’s unfair to expect Wiggins to replace the void left behind by Kevin Durant, but there is reason to believe that he can fit in well next to Curry and Thompson, contrary to Wright’s feelings.

The Warriors’ offense will offer Wiggins the most space he has played in so far in his career, and his best attributes are his athleticism and slashing ability.

Andrew Wiggins' debut with the Warriors

In his Warriors debut on Sunday, Golden State fans got a glimpse into what Wiggins can provide in his debut, showing flashes of what made him the top pick a few short years ago.

He won’t be asked to come in and be a savior – or a leader – for the Warriors. He’ll be asked to score and play defense.

Nothing more, nothing less.

"This is joining a team that went to 5 straight Finals, won 3 championships, that has the best shooting backcourt in the history of the game. … With no pressure and no need to carry anything we'll see a different version of Andrew Wiggins." — @HowardBeck pic.twitter.com/eAmhbmMS21

It’s still too early to tell what Wiggins will be in Golden State, but for a franchise that prides itself on being “lightyears” ahead of the rest of the NBA, they took a calculated risk.

And even though some (Nick Wright) are skeptical…

"We are lightyears away from the Warriors being lightyears ahead of the rest of the league. You have 2 untradeable contracts now — Draymond & Wiggins. … By the time LaMelo Ball or whomever you draft is ready to compete, Steph's going to be 36 & you're done." — @getnickwright pic.twitter.com/3KEoKHeWnT

…the Warriors, with the addition of Wiggins, have a path back to the top of the Western Conference next season upon Curry and Thompson’s return.

This is a new lease on basketball life for Wiggins.

📍 Welcome to The Bay, @22wiggins pic.twitter.com/rytN33NqVE

What he does with it could determine the fate of the NBA’s most recent dynasty.