Old-school: 1953 Corvette up for auction has historic ties to NASCAR

This 1953 Corvette got around in NASCAR circles back in the day, and not only on various tracks.

If you’re a diehard, old-school NASCAR fan and a Corvette lover, here’s a car that truly will leave your jaw hanging wide open.

Next Saturday at the Barrett-Jackson Scottsdale Collector Car Event, the very first 1953 Chevrolet Corvette race car ever made will cross the auction block, perhaps fetching as much as several million dollars. Lot No. 5054 will be auctioned with a reserve on it, meaning the car will have to meet a pre-determined — but undisclosed — minimum bid before it actually sells. If the bidding falls short, the car won’t sell, but that seems unlikely with this amazing find.

This Corvette is part of the Barrett-Jackson Salon Collection, the most elite of the more than 1,400 cars that will be sold this week.

According to the car’s catalog description, this Corvette "was probably a dual branding effort between" Chevrolet general manager Ed Cole and NASCAR founder and president William Henry Getty France, better known as "Big Bill" to folks in the stock-car circuit. "This effort was part of Ed Cole’s push to save the Corvette from extinction (700 sales in 1955) and Chevrolet’s first effort in creating a brand image of speed and performance lasting through seven generations of Corvettes," reads the catalog description.

This was one of two such Corvettes — the other a 1955 model — rebuilt by Chevrolet Engineering with a host of performance features, including a 265-cubic-inch, high-output V-8 engine with dual four-barrel carburetors; a 3-speed close ratio transmission; heavy duty rear end plastic tonneau covers, small racing windshields and relocated gauges. Cole and three-time Indianapolis 500 winner Mauri Rose personally supervised the project, which was described in documentation dated Nov. 3, 1955 under the title "Rebuilding of NASCAR Corvettes for Stock Car Racing."

The Corvette was shipped to Smokey Yunick in Daytona Beach "in early February 1956 in time for promotional NASCAR photos with Bill France Jr. and Joe Hawkins and the subsequent February 12-26, 1956 Annual Winter Daytona Beach Classics which included the 7th Annual International Safety and Speed Trials and Stock Car Races."

But there’s more to the story.

This car was verified as authentic and comes with extensive documentation, including Chevrolet Engineering build orders, photos and newspaper articles.

That it unquestionably is.

To recap: The first NASCAR Corvette ever built; once owned by Chevrolet and by NASCAR; built by three-time Indy 500 winner Mauri Rose; delivered to Smokey Yunick; raced by Junior Johnson, Herb Thomas and Bobby Myers around the dirt tracks around the Carolinas. Yes, folks, this one checks all the boxes.

As such, it ought to command huge money when it sells.

And one can’t help but wonder if it might be an attractive acquisition target for NASCAR team owner and avid collector Rick Hendrick. We’ll find out next Saturday.

More photos of the car, courtesy of Barrett-Jackson 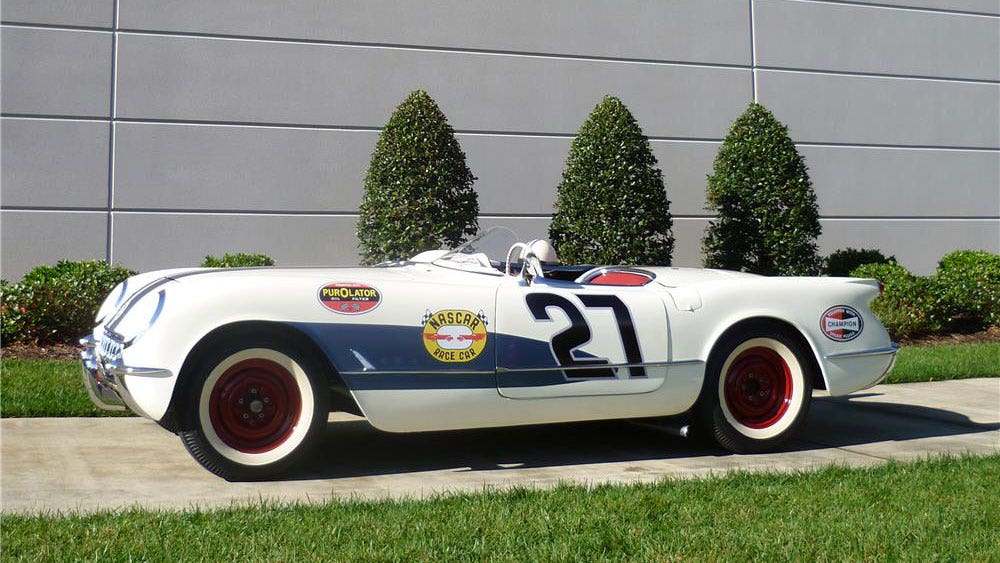