Ryan Hunter-Reay is discovering that winning the Indianapolis 500 is the “Gift that keeps on giving.”

His latest prize came during the Automotive News World Congress dinner at the North American International Auto Show in Detroit on Wednesday night when he was awarded his “Baby Borg” – a miniature trophy of the famed Borg-Warner Trophy that goes to the winning driver of the Indianapolis 500. Just last month, Hunter-Reay’s face was unveiled on the permanent trophy that resides at the Indianapolis Motor Speedway Hall of Fame Museum.

“It’s great to finally bring a piece of that win back home,” said the man who won the 98th Indianapolis 500 on May 25, 2014. “It’s such a huge accomplishment for my team and my career. It’s great to finally put something up on my shelf that I can share with family and friends.

“Getting the face on the trophy was a pretty emotional deal because of so many years I went to the IMS Museum and stared at the faces on the Borg-Warner Trophy and hoped that one I could be on there myself. That was certainly very emotional. This trophy completes it and thanks to BorgWarner I finally get to take home some hardware. It’s great they give the drivers and owners something to bring back to the shop.”

Team owner Michael Andretti collected his third Baby Borg Trophy as a team owner. One of the greatest drivers in IndyCar history, Andretti never won the Indianapolis 500 as a driver, but Hunter-Reay is the third different driver to win the race since Andretti became a team owner in 2003. The late Dan Wheldon gave Andretti his first Indy 500 team owner win in 2005 and Dario Franchitti won the race in an Andretti car in 2007.

“I’ve had a little more luck in that race as a team owner,” Andretti said. “As a driver I’ll never have that feeling to have my face on the Borg-Warner Trophy but it’s really special to bring home three Baby Borg Trophies and hopefully there are more of them in the future. It’s special and it’s great but I’m sure it would be different to have won it as a driver.”

Ryan Hunter-Reay poses with his likeness on the Borg-Warner Trophy.

Hunter-Reay’s latest accolade for winning the Indy 500 should be the end of a seven-and-a-half month celebration; the driver and team should be full-speed ahead preparing for the 2015 Verizon IndyCar Series season.

There remains one other Indy 500 honor that Hunter-Reay will be part of up next.

The winner of the previous Indianapolis 500 is on the Indy 500 ticket for the next race and that is one more honor for Hunter-Reay to celebrate his big win.

“It’s the gift that keeps on giving,” Hunter-Reay said. “Every month and a half it feels like another award is being given or recognition of some sort. I really feel like testing the new car with the Aero Kits will be turn the page in a way because we are so focused on 2015.

“After tonight, we’re really not thinking of 2014 any more.”

Be sure to catch Bruce Martin’s Honda IndyCar Report on RACEDAY on FOX Sports Radio every Sunday from 6-8 a.m. ET. 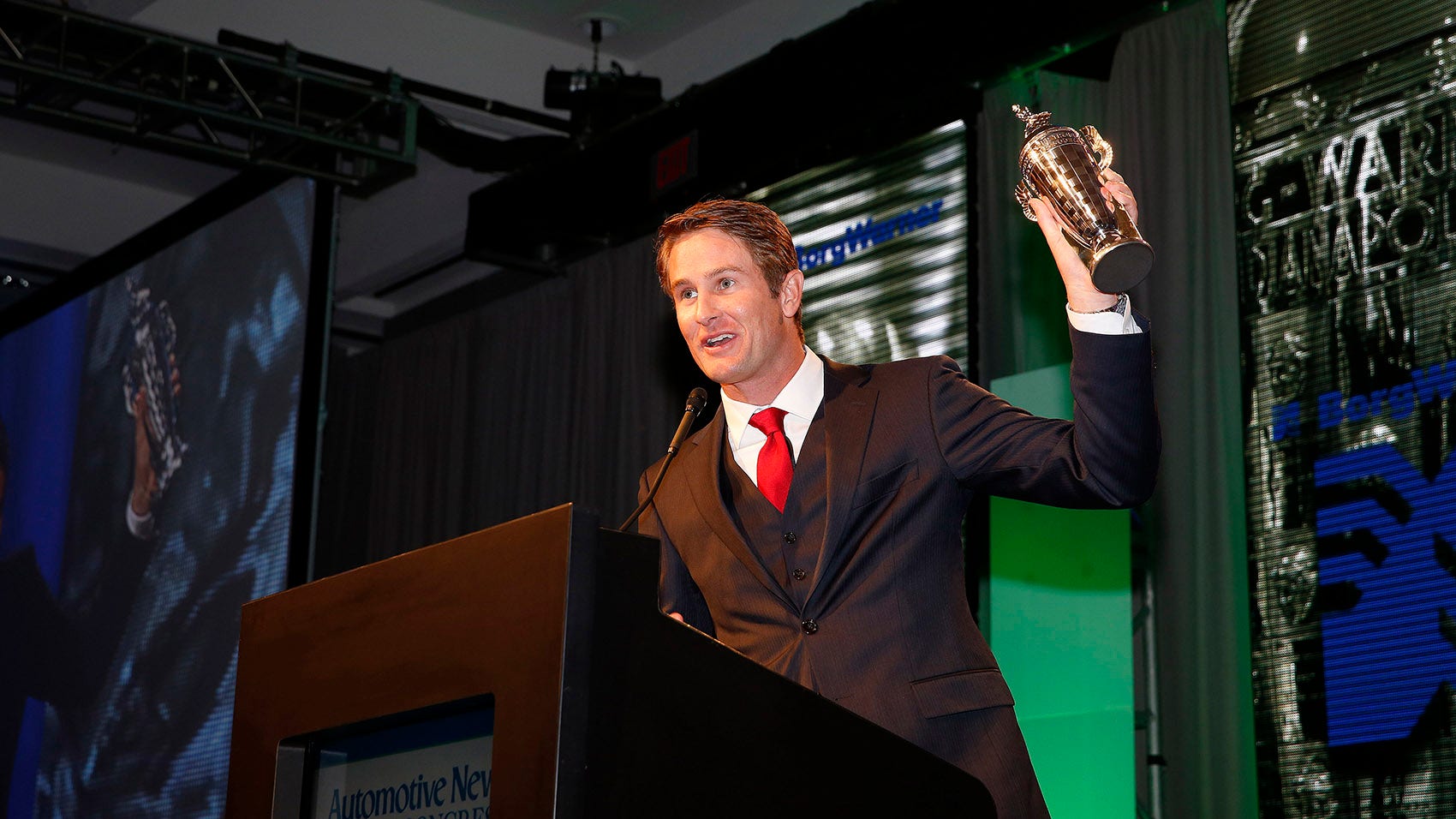