In its upcoming Scottsdale auction, Gooding & Co. will sell a 1964 Shelby 289 Cobra at no reserve.

In the early 2000s, Cotter bought his own Cobra from Jacques “Frenchy” Harguindeguy, a Northern California enthusiast who won Pebble Beach Best of Show honors in 2000 for an amazing 1937 Delahaye that he restored.

Cotter’s Cobra was an original, low-mile 289 model, and I personally took him to Frenchy’s house in Walnut Creek to pick it up. In return, I drove the Cobra, which Cotter still has. It was, like all Cobras, a beast to drive – fast, but primitive – and it was a sure way to make your heart race and your pulse rise.

Cotter unearthed enough barn-find Cobras to fill an entire book, but they are still comparatively rare animals. So when a real, honest-to-God barn-find Cobra comes up for sale, it draws a lot of attention.

In its upcoming Scottsdale auction, Gooding & Co. will sell a 1964 Shelby 289 Cobra at no reserve, meaning top bid gets it no matter what the final hammer price is.

After Allen bought the car in 1974, he moved to Vermont, and “the Cobra was placed on jacks and stored with the top up inside of Allen’s heated barn/workshop where it remained secluded and out of sight for 40 years,” according to the catalog description.

“Standing proudly as a late-production 289 Cobra with rack and pinion steering and desirable factory upgrades, CSX 2436 is simply irreplaceable as one of precious few Cobras remaining in such wonderfully preserved condition today,” reads the Gooding catalog description.

You can read the full catalog description here: http://www.goodingco.com/vehicle/1964-shelby-289-cobra-5/ 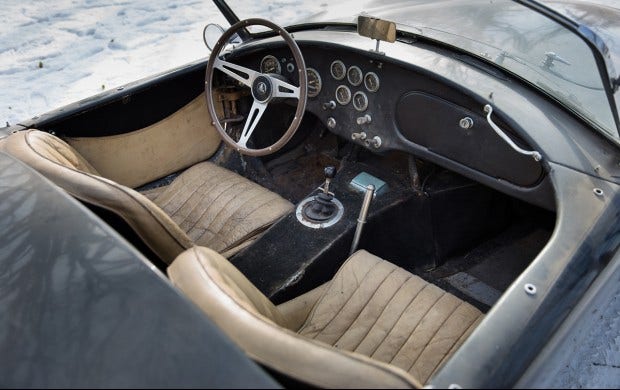