Want to slow down pitchers? Call the strike zone correctly

Because of where umpires stand, left-handed batters get a different strike zone.

After a two-decade stretch of offensive prowess, pitching is dominating Major League Baseball once again. The "Year of the Pitcher" has turned into the "Half Decade of the Pitcher" and at this point we might as well call it an era, because these changes don’t look like they’re going away any time soon. Whether it’s Felix Hernandez, Clayton Kershaw, or most recently Jose Fernandez, it seems like every team features a staff ace that used to be described as a once-in-a-generation talent. What was rare is now commonplace

As FOXSports’ own Rob Neyer has written on several occasions, the shift towards lower-scoring games has been a direct result of a rapidly increasing trend towards more strikeouts. 2013 set the record for highest average strikeout rate — 19.9% — but that isn’t really such an accomplishment anymore; the league has actually broken the all-time record for seasonal strikeout rate in each of the last six seasons.

And 2014 is just continuing the trend; the current league average strikeout rate of 20.8% would easily break the 2013 record. This is not a trend that seems to be peaking, only ever increasing, and at some point, MLB will be forced to confront the issue that the game is moving away from hit-it-and-run towards swing-and-walk-back-to-the-dugout. The league has shown that, if pitching begins to dominate too much, they will intervene to make things more equitable and move the sport back towards a more reasonable balance; after the 1968 season, they lowered the pitching mound, and in 1973, the American League adopted the Designated Hitter.

Things aren’t quite to those extremes yet, but the offensive levels of 1972 and 2014 maybe aren’t as different as you might think. The last year that pitchers had to bat in the AL, MLB as a whole hit .244/.311/.354; this year, MLB is hitting .248/.317/.389. There’s more power now than there was then, but the rate of hits and outs in the game are nearly equal to what they were before the DH existed. Having the National League adopt the DH would force offensive levels up, but it wouldn’t do much to turn the game away from its affection for strikeouts.

Instead, I’d like to suggest an alternative remedy that doesn’t require any new rules or any change to an existing rule. That alternative? Help Major League umpires move the strike zone back over the plate. More specifically, to make this adjustment when left-handed batters are at the plate.

Thanks to the introduction of the PITCHF/x system in 2007, we now have access to highly accurate pitch location data for millions of pitches thrown in Major League Baseball. And that data has made it clear that the strike zone called against left-handed batters is simply not in the same location as the strike zone called against right-handed batters.

As John Walsh first showed back in 2007 (and others have since confirmed), the called strike zone against left-handed hitters extends from the inside corner to an area roughly equal to five inches off the outer half of the plate. You can see a visual representation of where the edge of the strike zone is by rule book definition, and where it is by where 50 percent of pitches are called balls and 50% are called strikes in this image below. 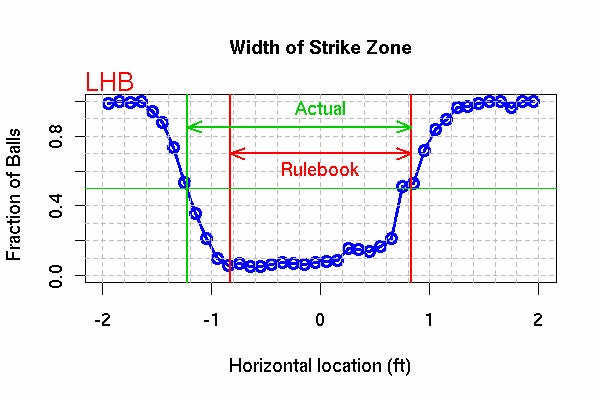 The rulebook definition of the strike zone references the 17-inch width of home plate, and the diameter of a baseball is about three inches, so realistically, the outer edge of the rulebook strike zone should be roughly 11.5 inches from the center of the plate; 8.5 inches for the outer half of the plate, and three inches for the diameter of the ball, allowing an umpire to call a pitch a strike if any part of the ball goes over any part of the plate. In other words, from the middle of the plate away, batters should be expected to cover an area of just under one foot.

In reality, the actual called strike zone against left-handed hitters extends to about 14.5 inches off the center of the plate, as Walsh’s image shows. In follow-up work, Jon Rogele calculated the percentage of called balls and called strikes in the area covering 2.5 inches off the outside corner against both right-handers and left-handers. For your convenience, I’m going to borrow his relevant table.

Pitches in a range of up to 2.5 inches off the plate were called strikes more than 55% of the time against left-handed hitters, but just 20 percent of the time against right-handed hitters. Do umpires just have a deep-seated hatred of all things lefty? No, it’s mostly a function of where they stand. In that 2011 article, Mike Fast — who is now in the employ of the Houston Astros — tracked the head position of the home plate umpire based on the handedness of the batter.

Because the umpire stands in the gap between the catcher and the hitter, they do not stand in positions that are equidistant to the plate. As Fast noted, with a left-handed hitter at the plate, the umpire would stand almost directly in-line with the inside corner, while when a right-handed batter was at the plate, they were often well off the inner half of the plate. It seems likely that it is simply easier to see the edges of the plate from where umpires stand with RHBs at the plate compared to where they stand with LHBs batting, and thus, the left-handed strike zone gets shifted from the inside corner to an area that extends a few inches off the plate.

Nowhere in the rulebook is it written that left-handers should have to cover an area of up to three inches off the plate, and the shifted zone forces left-handers to chase pitches that are out of the zone and difficult to make contact with. And this type of out-of-zone swing is almost entirely responsible for the increase in strikeout rate in MLB over the last five years.

O-Contact is contact on swings at pitches out of the zone, while Z-Contact is contact on swings at pitches in the zone. The rate of swings-and-misses on pitches in the zone has hardly moved during the PITCHF/x era, going from 88 percent  to 87 percent in a six-year span. However, the rate of contact on pitches outside the strike zone has fallen from 66 percent down to 62, and this decline in out-of-zone contact rate is one of the primary drivers of the increase in strikeout rate.

The rulebook strike zone was created for some valid reasons, and realistically, hitters can’t cover an area much larger than the width of the plate and still make solid contact a reasonable amount of the time. Left-handed hitters in particular are being forced into swinging at pitches that are, by definition, not strikes, and the available information should be able to incentivize umpires to make the changes necessary to call something closer to a rulebook strike zone against left-handed hitters.

Bring the left-handed strike zone back over the width of the plate, and force pitchers to actually throw strikes to left-handed hitters, rather than nibbling and staying away from some of the game’s best power hitters. Stop giving them free early strikes, allowing them to get to two-strike counts where left-handed hitters have to protect even further, chasing more and more pitches out of the zone.

Enforce the width of the strike zone as it is written in the rulebook, and the league has a chance of slowing down and maybe even reversing the runaway strikeout trend in MLB. And besides, left-handers already have the cards stacked against them enough in life; we don’t need to arbitrarily screw them over in baseball too.