Has trend toward extensions reduced rate of roster turnover?

Trout is free agent after 2020 season. #Yankees current payroll obligations for 2021 (if Ellsbury option not picked up) = $0. #justsaying

Sherman’s tweet was based on the same assumption that underpins the traditional taunt of the Yankees fan: So what if we don’t develop our own talent? We can always take away yours.

There’s some truth to that taunt, since the Steinbrenner family’s willingness to dig into its deep pockets has made the Yankees baseball’s most resented robber barons over the last four decades. But the Yankees are guilty only of taking a league-wide trend to the extreme.

The abolishment of the reserve clause and the advent of free agency made it easier for every team to raid its opponents’ rosters, prompting noted New York baseball fan Jerry Seinfeld to point out that “loyalty to any one sports team is pretty hard to justify, because the players are always changing.” With free agency in full swing, Seinfeld said, sports fans were really just “rooting for laundry.”

However, coming as it did on the heels of a winter’s worth of extensions, Sherman’s tweet seemed like a relic of an earlier era. The day before Trout took Angels owner Arte Moreno’s money, Miguel Cabrera signed an extension with Detroit that virtually ensured that he’ll end his Hall of Fame career without ever declaring free agency.

So is Seinfeld’s observation still accurate? Or are we entering an era in which it will once again be safe for fans to get attached to particular players?

To answer that question, we need to examine the rate of roster turnover over time to isolate the effect of free agency. Former Baseball Analysts blogger (and current Cleveland Indians analyst) Sky Andrecheck explored the same subject in a post from 2009, so we’ll revisit his work with a slightly different methodology and the benefit of a few more seasons of hindsight.

To determine the turnover rate from a given season to the next, we’ll limit our sample to players who played in the major leagues in both years. We’ll assign a “primary team” to each player in each season (the team for which he played the most games in that year). If the player had two primary teams, he goes into the “turnover” group. If his primary team was the same in both seasons, he counts as a player who stayed put.

The turnover rate for each year, then, is the number of players who changed teams divided by the number of players in the sample. Of course, players retiring or being demoted to the minors is a type of turnover, too, but not the kind we’re concerned with today. (For what it’s worth, including retirements and demotions in the “turnover” group raises the rate but doesn’t significantly alter the trend over time.)

Before baseball’s so-called “modern era,” the turnover rate tended to be volatile, so we’ll start the timeline in 1904, by which point the two-league system had stabilized. Keep in mind that the line below is a “smoothed” five-year average (so the turnover rate from, say, 1964 is the average of the rates from 1962–66). 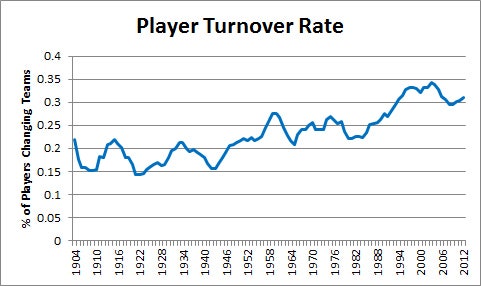 The average turnover rate over the last century-plus was about 23 percent, which means that almost a quarter of players who appeared in the majors in a typical two-year stretch switched primary teams from one year to the next. Even using a smoothed average, though, there’s a wide range in the results, with the percentage during high-turnover eras more than doubling that of low-turnover times.

Most of the bumps and dips in the trend line can be traced to actual events. The 1904 percentage is skewed somewhat by higher rates at the turn of the century (not shown). The hump in the mid 19-teens is attributable to the short-lived Federal League, a rival third major league that successfully lured prominent players away from the NL and AL until it folded after 1915.

The climb in the early-to-mid-1930s corresponds to the Great Depression, when rosters were reduced to 23 players as a cost-cutting measure and some teams were forced to sell their stars to stay solvent.  The peak from 1959–60, during which mostly marginal players were on the move, is more difficult to decipher. Official Baseball Historian John Thorn suggests that it might be a combination of a couple of factors: a richer talent supply, stemming from the postwar explosion in the number of farm teams and from the removal of any remaining racial barriers, and the rapid rise and fall of the Continental League, which tipped off GMs that expansion was about to take place. (Indians GM and master of self-sabotage Frank “Trader” Lane made 20 trades in those two seasons, which was also a factor, but Lane was active with other teams at other times.)

Clearly, though, the biggest effect came from free agency. Immediately after the 1975 Seitz decision nullified the reserve clause and a 1976 agreement between MLB and the Players Association codified the six-year free-agent system, the turnover rate rose dramatically and remained high (historically speaking) until collusion restricted player movement in the mid-to-late-’80s.

Once another anti-owner arbitration decision put an end to that practice, the reins were removed, and roster churn climbed as quickly as player salaries. Within three years of the end of collusion, the turnover rate was higher than it had been at any previous point in the 20th century. And it didn’t stop there: It kept climbing until 2003, when the smoothed average came close to touching 35 percent.

If we break the data down by service time (starting with 1950), we see that not every player has been subject to the same spike in turnover rate. 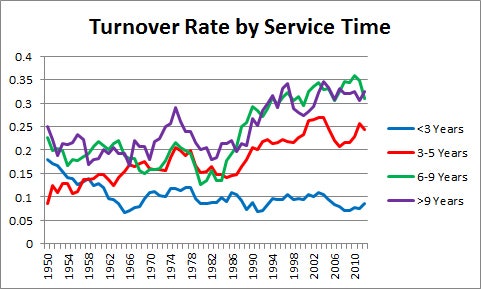 The percentage of pre-arbitration players changing teams hasn’t increased at all. If anything, it’s declined, as teams have placed a greater value on cost-controlled young talent. The greatest increases have come, as expected, among free agent-eligible players with six or more years of service time. Players with 3-5 years of service time have seen a smaller rise, perhaps because teams have made an effort to trade impending free agents whom they knew they wouldn’t re-sign.

The “Seinfeld” episode with the “rooting for laundry” routine aired in January 1995, shortly after baseball’s turnover rate rose above 30 percent for the first time in living memory. In the ensuing seasons, competitive balance became one of Major League Baseball’s biggest concerns, as the perception grew that big-market teams were preying on the less profitable by taking on contracts their competitors couldn’t afford.

“Large and growing revenue disparities exist and are causing problems of chronic competitive imbalance,” warned the Commissioner’s Blue Ribbon Panel on Baseball Economics in July 2000. “These problems have become substantially worse during the five complete seasons during the strike-shortened season of 1994 and seem likely to remain severe unless Major League Baseball undertakes remedial actions proportional to the problem.”

If we break down the turnover rate by player performance, we can see why the situation seemed scary. Here are the post-1950 turnover rates for players in four separate tiers of production, as measured by Wins Above Replacement Player, Baseball Prospectus’ total value stat:

There are two obvious insights: first, that in general, the less a player produces, the more likely he is to relocate; and second, that in the free agency era, players of all performance levels are more likely to move than they were with the reserve clause binding them to their teams.

But there’s a third takeaway: Players who produced five WARP or more — the most visible, the most valuable, and the most likely to inspire an emotional connection — saw their turnover rate rise disproportionately, roughly quintupling relative to what it had been before free agency. At the height of the “Everyone Must Go” era, almost one in five superstars switched uniforms from one year to the next, which threatened — or at least appeared to threaten — to destabilize the sport.

If fans couldn’t count on continuity in the face of their franchise, then perhaps fear of loss would prevent them from forming attachments to teams in the first place. Without those attachments, why would they go to the games?

Fortunately, we’ve seen a correction of sorts since the crisis of the early aughts. If you’ve been studying these graphs closely, you’ve probably noticed that the turnover rate has stopped rising. In fact, it seems to have regressed.

We can’t yet calculate the percentage of players changing primary teams from 2013–14, but through 2012–13, the rate had fallen close to where it was two decades before, as had the rate among star players specifically. It’s still higher than it was at any point between the 19th century and the 1990s, but unlike the game’s runaway strikeout rate, its growth has come to a halt.

It’s possible that we’ll see a further decline in the coming years. Expanded revenue sharing and the luxury tax, two concessions that MLB extracted from the players during the down-to-the-wire 2002 CBA negotiations, may have helped restrain the roster churn, but more recent developments might send it into a full retreat.

Shared revenues from new national TV contracts and MLB Advanced Media’s digital offerings have increased every club’s cash flow. And many teams have locked up lucrative local TV contracts amid the current craze for DVR-proof programming, so even if the broadcast bubble bursts, they can count on carrying big billfolds for the duration of those deals.

Thanks to that influx of funds — which the owners, not the players, have raked in at a disproportionate rate — fewer teams will be forced to surrender their stars for financial reasons. And as more and more teams sign their homegrown talents to early extensions that cover their most productive seasons, fewer and fewer players will reach free agency in their physical primes.

Superstars can’t sign somewhere else if they’re kept under team control until they’re no longer elite, and with stricter PED testing in place, the atypical aging curves that were common during the so-called “Steroid Era” are a thing of the past. The bulk of baseball’s wins are again being produced by players under 30, and many of those players have already tied the knot with their teams. It’s probably not a coincidence that the 2014–15 free-agent class is shaping up to be the weakest we’ve seen for some time.

If, as the recent wave of extensions suggests, the approaching offseason is a sign of winters to come, then vulturing other teams’ young talent could cease to be a viable strategy (at least until the massive contracts handed out to the few attractive free agents available persuade players to stop signing extensions).

That’s not good news for the Yankees, as long as their pattern of poor drafting and player development persists, but it’s great news for fans who hope to see their favorite stars stay put. It’s probably safer to buy a jersey today than it has been at any other time since Seinfeld delivered his line about laundry.

So choose wisely: the name on the back might belong to someone you’ll be watching for a while.

Thanks to Rob McQuown for research assistance.