Week 7 NFL picks against the spread recap with Jason McIntyre | WHAT DID YOU LEARN?

We all know the NFL is a week-to-week league … but is it also turning into a traveling warriors league? It’s astounding how the road teams continue to cover at an incredible clip (62% this year including Sunday’s results); underdogs Arizona, New Orleans and Baltimore won outright, while the Rams, Jaguars, Vikings and 49ers also finished with road wins.

Traditionally, home field advantage was worth 3 points in the NFL … you have to wonder if that’s down to 1.5 or 2 points this year given how home turf doesn’t seem to mean much. This is where the fun begins: Right now, there are only two road favorites next week and both are because the home underdog has a quarterback whose status is in doubt (Atlanta’s Matt Ryan and Kansas City’s Patrick Mahomes).

More often than not, I give good advice … I should probably listen

Why don’t I follow my own advice? Please, someone let me know … Last week in this space: Don’t get in front of a moving train. And as I said last week, Alvin Karama is hurt and the Saints have to play in Chicago? Oh hell yeah, I’ll take the Bears at home! I know they’ll play just like they did vs the Vikings at home earlier this season! Midway through the 2nd quarter, I knew I had bet on the wrong team. Mitchell Trubisky’s inflated garbage-time numbers (251 yards and 2 touchdowns) meant nothing; they couldn’t move the football in critical moments.

The Saints defense is probably 1B to the 1A 49ers in the NFC right now. You can’t run on them (Chicago had seven times for 17 yards) and cornerback Marshon Lattimore is playing like his rookie self when he won defensive ROY. The Bears knew a lethal dose of Michael Thomas was coming: He caught 9 of 11 targets for 131 yards. Latavius Murray rushed for 119 yards.

Drew Brees will return to the Saints soon and will be the favored quarterback in their nine remaining games. I know Khalil Mack got on a plane to London two weeks ago, but did he ever return? Zero sacks and zero tackles for loss in the last two games – total non-factor.

The last time the Seahawks lost a home game, the Saints scored touchdowns via special teams and defense. Sunday was a different game but the same story: The Ravens scored two defensive touchdowns.

MVP candidate Russell Wilson had a lackluster performance, tossing a bad pick-6 into the arms of Marcus Peters … and he was outplayed by Lamar Jackson, who also wasn’t incredibly prolific through the air (9-of-20, 143 yards), but five of those completions went for first downs. He was dynamic on the ground (14 carries, 116 yards and a touchdown).

The highly criticized Ravens’ defense got a fantastic game from linebacker LJ Fort, who was everywhere, finishing with a sack and two tackles for loss. Before a DK Metcalf fumble-for-touchdown locked in the Ravens win, Seattle was able to muster a lowly 65 yards in the second half.

The Ravens have a bye week before a big showdown in the AFC playing the Patriots to see if anyone can challenge New England. 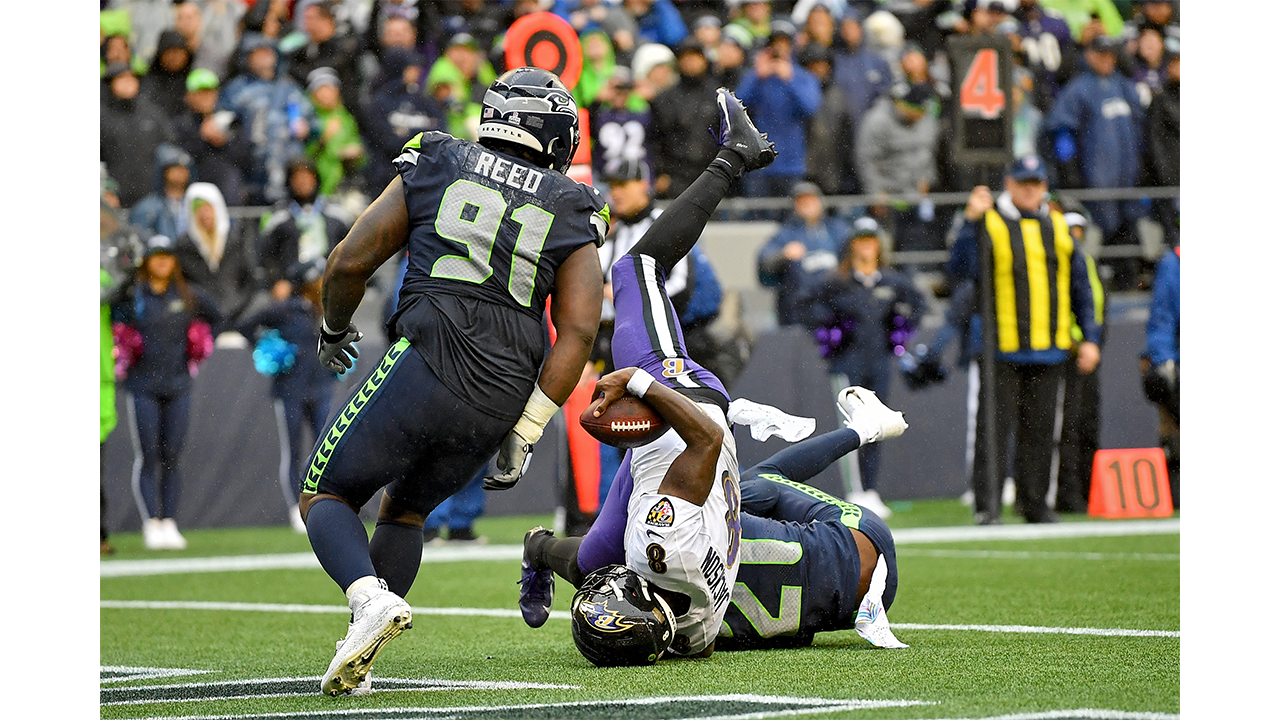 Think twice before betting on the Chargers

Futility in the NFL is mostly associated with the Cleveland Browns … but in recent decades, add the Miami Dolphins and Washington Redskins to the list. The Chargers aren’t usually lumped into this group of jokers, but maybe they should be?

They wrote a new chapter of embarrassment Sunday in Tennessee, having 1st and goal from the Tennessee 1-yard line with 39 seconds left. A field goal ties it, a touchdown wins the game. Victory seemed possible in a game where, with five minutes left, the Chargers trailed only by 3. Twice, the Chargers had touchdowns called back and down at the one-yard line … One yard away from a win, but Melvin Gordon fumbled and the Titans won the game.

The Chargers will get healthy in the trenches and make a late-season run toward respectability, but they’re not a team you can bet on right now. The Titans? They were scoring touchdowns in the red zone 53% of the time coming into the game (19th in the NFL) – almost exclusively guided by Marcus Mariota; they were 3-for-3 under Ryan Tannehill Sunday. 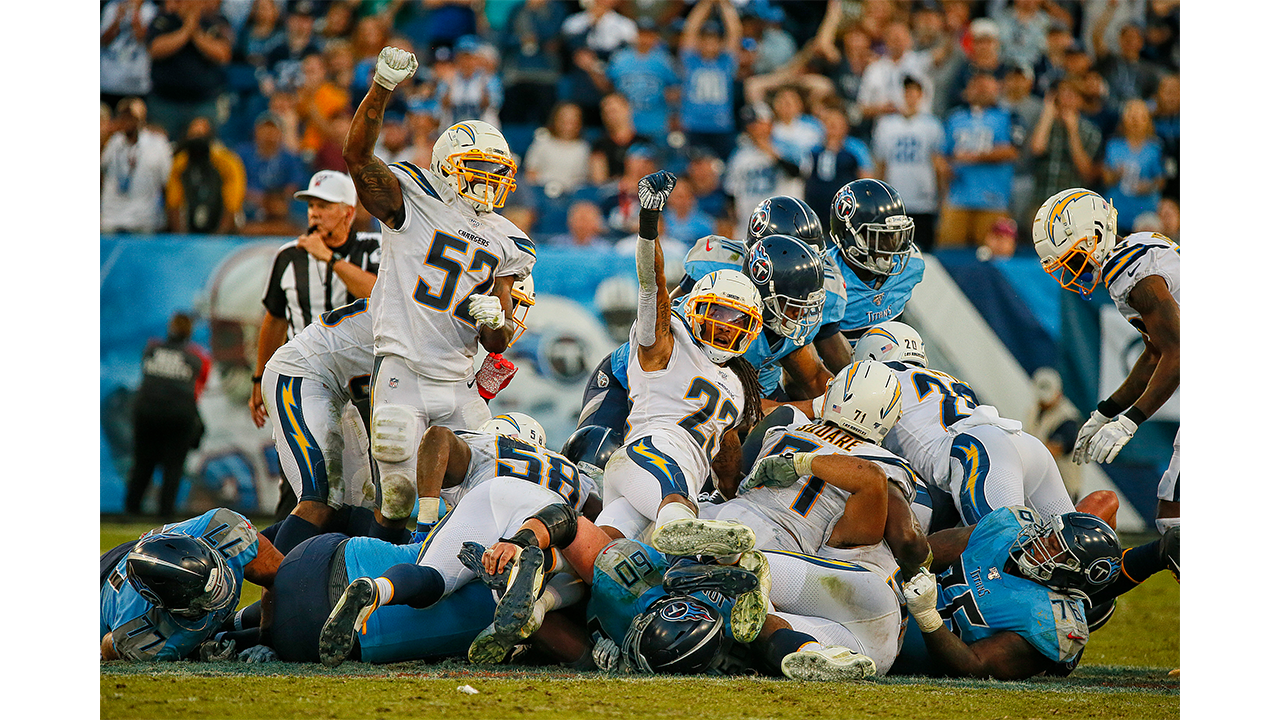 Here’s a fun game: print out an NFL box score, chop off the names of the teams and the final score and hand it to a friend who follows and gambles on the NFL. Can they guess the winner?

The Giants had more first downs, more yards, fewer penalties, and were more efficient in the red zone. But guess what? They lost. The reason is no surprise: Turnovers. The Cardinals soared, turning the three turnovers into 17 points. All three scores came on a short fields. The length of drives? Respectively: 32 yards, 51 yards and 0 yards.

The Giants handed the game over to the Cardinals on a silver platter. In his pervious four starts, rookie Daniel Jones had been sacked 10 times; he was dropped eight times by the Cardinals (four by Chandler Jones). 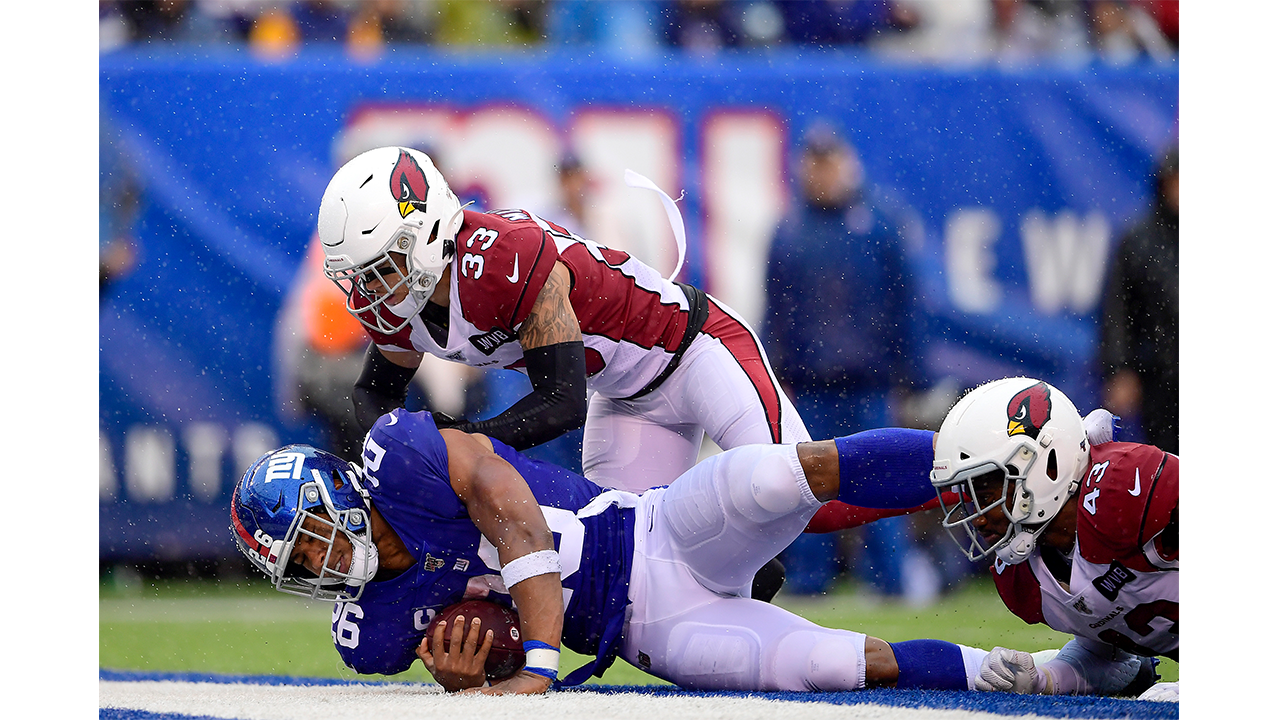