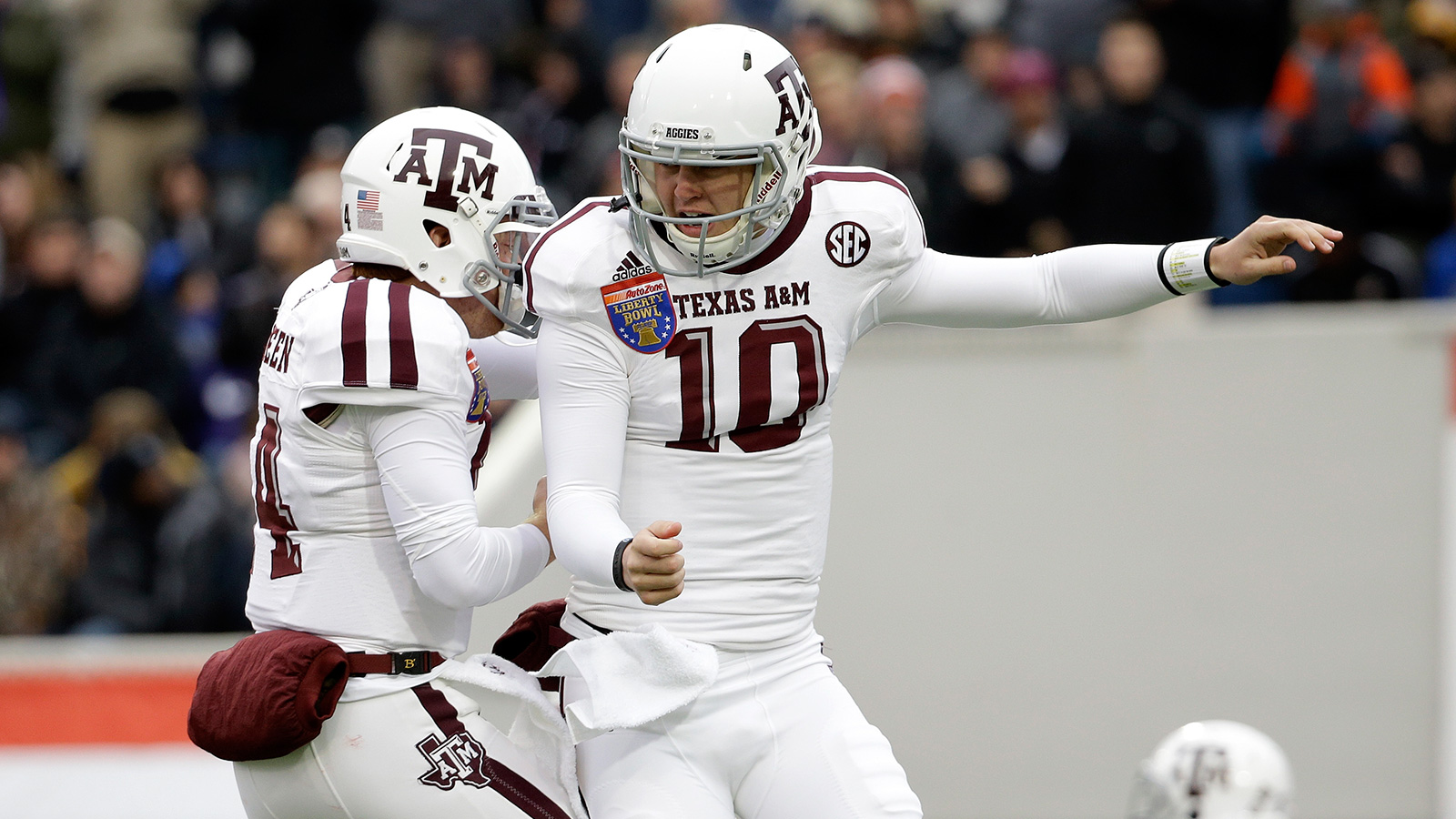 While kickoff for the 2015 season is still months away, it’s never too early to start looking at rosters, depth charts and coaching changes for teams poised to make a jump in the rankings next year.

With a few months to dissect rosters, opinions can change on teams — perhaps even a couple of times in the offseason.

What teams have our attention for 2015?

Here are our top five teams on the rise entering the new season.

With only eight returning starters (and just two on defense), most considered 2014 a rebuilding year for Arizona State. The Sun Devils ranked No. 19 in the first Associated Press poll but finished one win away from playing for the Pac-12 championship for the second year in a row. The Sun Devils have recorded back-to-back seasons of double-digit victories for the first time since 1972-73, and this team could rank among the top 10-15 in the nation in preseason polls. Quarterback Taylor Kelly will be missed, but Mike Bercovici (12 TDs, four NTs) has played well when called upon. Outside of getting Bercovici acclimated to being the full-time starter, the offense has to replace top receiver Jaelen Strong and left tackle Jamil Douglas. Strong and Douglas are big losses, but the Sun Devils have a deep stable of running backs, and talented junior college recruit Eric Lauderdale is ready to contribute after a redshirt year.

Despite returning only two starters on defense, Arizona State ranked fourth in the Pac-12 in sacks (39) and held opponents to 27.9 points per game. There’s plenty of optimism about this group for 2015 with just two senior starters departing. The Sun Devils also have a favorable path to a South division title, featuring home games against USC, Oregon, Washington and Arizona. 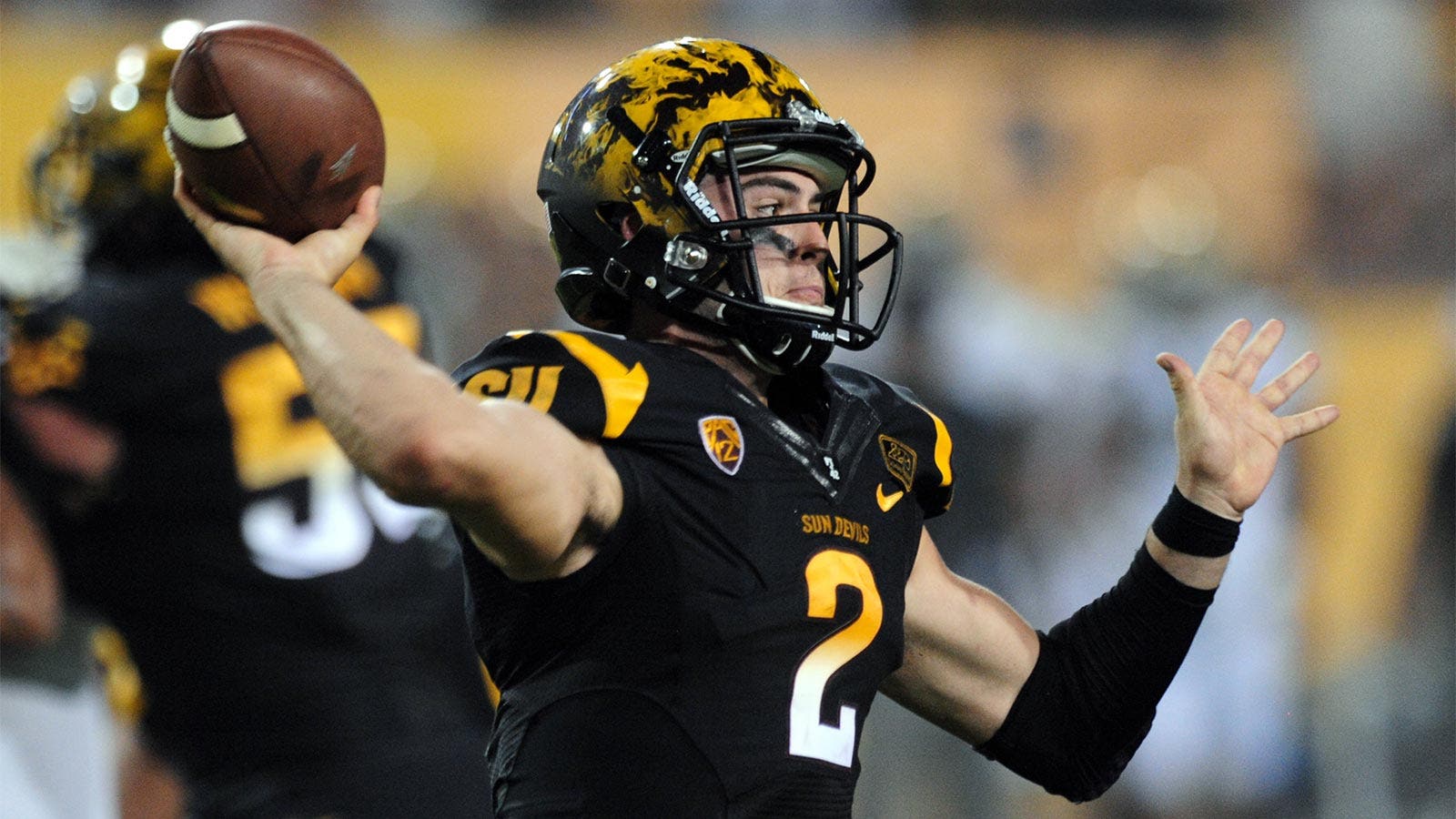 Since reaching the national championship in 2012, Notre Dame is 17-9 in the last two seasons and finished 2014 by losing five out of its last seven games. While those two numbers are reason to doubt the Fighting Irish, there’s a lot to like about this team in 2015. Most of the depth chart is intact on both sides of the ball, and the return of end Ishaq Williams and cornerback KeiVarae Russell should bolster a defense that struggled in the second half of the season. Malik Zaire’s performance (12-of-15, 96 yards, one TD and 96 rush yards) in the Music City Bowl against LSU was promising, and the young quarterback should enter spring practice as the favorite to take the opening snap of 2015. Regardless of whether it’s Zaire or Everett Golson under center, the supporting cast will be solid.

Notre Dame returns its top four statistical receivers, Tarean Folston (889 yards) is back at running back and the offensive line has four starters in place, including standout left tackle Ronnie Stanley. Fixing the defense will be coach Brian Kelly’s top priority this spring, as the Fighting Irish gave up at least 30 points in seven out of their last eight games. On the positive side for Kelly, Notre Dame’s defense was hit hard by injuries and is due for better luck in that department next season. The schedule is tough, but the Fighting Irish have the personnel to be a darkhorse contender for a playoff spot next season.

Under coach Mike Gundy’s watch, Oklahoma State has won at least nine games in five out of the last seven seasons. The Cowboys are coming off a 7-6 mark in 2014, which was no surprise considering the team entered the year with just seven returning starters and lost around 30 seniors from the 2013 squad. After a 5-1 start, Oklahoma State lost five in a row and needed an upset win over Oklahoma in the regular-season finale to reach the postseason. The Cowboys won their bowl game over Washington to finish with a winning record for the ninth consecutive year. While 2014 was a step back in the win column, the arrow is pointing up on Oklahoma State next season.

True freshman quarterback Mason Rudolph was pressed into action due to injuries and passed for 853 yards and six touchdowns over the final three games. Rudolph should benefit from a full spring to work as the starter, and the young signal-caller is surrounded by talent at receiver, including five of the top six statistical options from 2014. The biggest concerns on offense remain up front (40 sacks allowed last year) and at running back. The defense has to replace tackles James Castleman and Ofa Hautau and linebacker Josh Furman, but end Emmanuel Ogbah and linebacker Ryan Simmons lead a unit that returns largely intact. And with a team that will be developing and improving as the season progresses in 2015, Oklahoma State should benefit by playing its three toughest games (TCU, Baylor and Oklahoma) at home in Stillwater in November next year.

Georgia is the early favorite in the SEC East next year, but is Tennessee the biggest threat to the Bulldogs’ championship hopes? It’s certainly possible. The Volunteers are making steady progress under coach Butch Jones, improving their win total by two games from 2013 to 2014. And Jones was able to move the program forward in the win column despite playing 23 true freshmen — the most in the nation — this season. Recruiting is going well for Tennessee, so there’s another group of talented players headed to Knoxville to replenish the roster in time for the 2015 season.

Quarterback Joshua Dobbs and running back Jalen Hurd lead the way on offense, and the receiving corps should benefit from a healthy Marquez North. The offensive line was an inexperienced group in 2014 and struggled with five new starters. However, this unit only loses tackle Jacob Gillam and should improve with an offseason to jell as a group. The defense allowed 27.1 points per game in SEC contests last season, but there’s reason to believe this could be one of the most improved groups in the conference next year, especially with the continued development of end Derek Barnett.

Texas A&M’s win total under coach Kevin Sumlin has dropped in back-to-back years after recording an 11-2 mark in 2012. But there’s still plenty to like about the direction of this program, starting with the changes to the coaching staff. Since joining the SEC, Texas A&M has struggled mightily on defense and needs to fix that group to contend in the division. The Aggies took a big step forward on defense with the addition of veteran coordinator John Chavis. “The Chief” engineered some of the SEC’s top defenses in his tenure at LSU, and his experience in developing talent should pay dividends for Texas A&M with a front seven that’s littered with youth.

In the first season without Johnny Manziel, the Aggies averaged 35.2 points per game. That number could climb in 2015 with Kyle Allen’s development at quarterback, as well as the return of a talented receiving corps featuring Speedy Noil, Josh Reynolds and Ricky Seals-Jones. With another top-10 recruiting class headed to College Station, the talent level and depth at Texas A&M is only going to get better.