CFB AM: One photo proves Oregon has some of nation’s very best fans 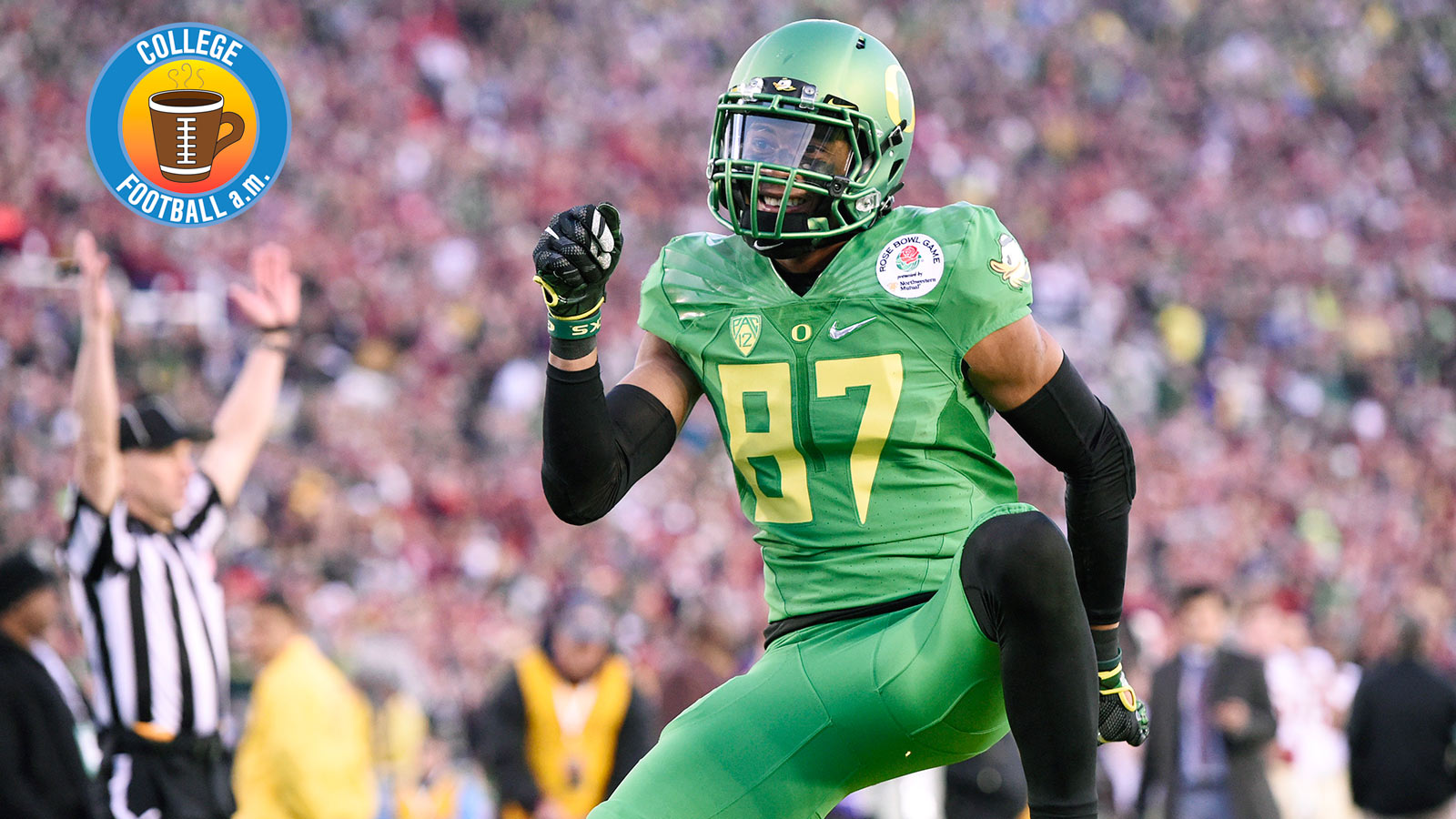 Question coming out of a long holiday weekend in which the CFB world caught its breath: Why don’t Oregon fans get mentioned more often when discussing the nation’s most passionate fan bases?

They produce one of the loudest and most unique homefield advantages in college football. They travel well to support the Ducks.

So how come many just assume they take a backseat to the Ohio States and Florida States and Alabamas of the college football world?

If we need one more piece of evidence to support the Oregon argument, let me present to you one photo from last week’s Rose Bowl that says everything you need to know about Ducks fans.

It’s an aerial shot of the Rose Bowl, and it’s awesome:

At least 75 percent of the Rose Bowl was green, while most FSU fans stayed home because a) they made the trip to Pasadena for last year’s title game and didn’t want to go again or b) they presumed FSU would win and therefore were saving their money for this year’s title game.

Either way, Oregon fans overwhelmed the Rose Bowl and made the 59-20 blowout feel something like a home game for the Ducks. Most probably expect Buckeye fans to overrun the national championship game in Dallas a week from today. That would be surprising.

Oregon has some of the best fans in the country – they’ll get to Dallas. Can’t wait for that game and that atmosphere.

1. After Oklahoma got blown out by Clemson, 40-6, on Dec. 29 in the Russell Athletic Bowl, some fans called for change at the top of Oklahoma football. Those who didn’t want Bob Stoops fired demanded he make radical changes to his staff. Well, those changes have begun. As Bruce Feldman reported Sunday, co-offensive coordinator Jay Norvell is out at Oklahoma, and it’s just the first of multiple moves expected to be in the works. Fans probably wouldn’t be sad to see DC Mike Stoops go, but we’ll see if Bob feels as if his brother is part of the problem in Norman.

2. It was a big recruiting weekend with the US Army All-American Bowl and the Under Armour All-America Game both taking place. Alabama and Florida State recruits stole the show at the Under Armour game, writes Sanjay Kirpalani. A four-star WR/DB committed to USC for “next three years.” The nephew of Hall of Famer and Miami great Michael Irvin picked Texas over the Canes. Some good news for Miami, though: It beat out Alabama for a coveted four-star receiver.

3. Some final bowl action over the weekend, as the 2014 college football season has come down to one final game: Florida beat East Carolina, 28-20, in the Birmingham Bowl and new coach Jim McElwain tailgated with fans beforehand; UCLA beat Kansas State, 40-35, in the Alamo Bowl and then everyone spent a lot of time wondering what happened between Jim Mora and Bill Snyder in the postgame handshake; Toledo beat Arkansas State, 63-44, in the GoDaddy Bowl, with Kareem Hunt rushing for 271 yards and five TDs — the MAC went out with a bang, writes Bill Connelly.

1. According to a Florida State linebacker, some Seminoles returned to Tallahassee on Friday, after losing the Rose Bowl on Thursday, to find their cars keyed and tires slashed. If that’s true — wow.

3. There are many factors that play into TV ratings, and I’m not sure we can draw much from one result, but this is notable: The College Football Playoff semifinals had a bigger TV audience than two NFL playoff games over the weekend — Arizona-Carolina on cable and Baltimore-Pittsburgh on network TV. If nothing else, it’s another sign college football is in fantastic shape.

1. ICYMI, some leftovers from last week’s Rose and Sugar bowls: How FSU’s 29-game win streak went to hell in one quarter; Oregon players mocked Jameis Winston with a “no means no” chant; this is what happens when the Internet meets a Winston gaffe; five things the Winston era will be best remembered for.

2. Braxton Miller almost got himself into some trouble with Ohio State fans by picking Oregon to win the national championship on Twitter, but he then tweeted that he accidently hit the wrong button. As if you needed this reinforced, kids: Nothing – nothing – you do on social media will go unnoticed by everyone.

3. New Michigan coach Jim Harbaugh is on Twitter. Harbaugh missed out on a couple assistants he wanted to hire, writes Zach Barnett.

On Sunday, ESPN and sports broadcasting legend Stuart Scott passed away after a long battle with cancer. It’s rocked the sports world, as we’ve all come to see the impact Stuart had on so many. Among many things Stuart was proud of, he was exceptionally proud to be from North Carolina and graduate from UNC. As a Tar Heel alum, I’m proud we had Stuart Scott – he’s the very best of what the Chapel Hill community represents.

Here’s a video from some in the FOX Sports family remembering Stuart.

Enjoy a reflective Monday as we charge head-on into 2015, and please say a prayer for Stuart and his family.