Below is Stewart Mandel’s first crack at next season’s preseason rankings, with a familiar face leading the way (final 2014 record in parentheses).

As talented as the Buckeyes proved to be in winning the College Football Playoff national championship, they’ll be even more stacked in 2015. Only seven starters graduate and nobody’s turning pro early. Stars like RB Ezekiel Elliott, DE Joey Bosa, LB Darron Lee and S Vonn Bell all return. As of now, so will three accomplished quarterbacks — Braxton Miller, J.T. Barrett and Cardale Jones.

When DE Shawn Oakman announced he’d return for his senior season, it assured the Bears would return 10 starters on defense. QB Bryce Petty moves on, but heir apparent Seth Russell performed admirably in spots. And, as always, he’ll have no shortage of weapons around him in RB Shock Linwood and WRs Corey Coleman, KD Cannon and Jay Lee.

Coming off an appearance in the national title game, replacing Marcus Mariota (expected to leave for the NFL) will certainly be daunting for the Ducks, as Jeff Lockie has little meaningful experience to this point, but the Ducks have also won at least 11 games for five straight seasons. So while they might not start as favorites to reach the 2016 title game in Glendale, Ariz., they’ll certainly be on the short list of contenders, especially with RBs Royce Freeman and Thomas Tyner returning in the backfield.

Jameis Winston will be gone, but likely successor Sean Maguire beat Clemson this past season. He’ll benefit from more experience around him, as running back Dalvin Cook and receivers Travis Rudolph and Ermon Lane enter their second seasons. The defense will need to reload, with at least three starters declaring for the draft, but S Jalen Ramsey returns as the anchor.

You rarely have to worry about Gus Malzahn’s offense, even when breaking in a new quarterback in Jeremy Johnson. The Tigers could really make strides on defense with the arrival of accomplished coordinator Will Muschamp to work with a talented but underachieving group. Budding star DE Carl Lawson, who missed the 2014 season with a knee injury, will join eight returning starters.

This will be Nick Saban’s tallest rebuilding task in several years, as the Tide will have a new quarterback (Jake Coker?) and no Amari Cooper or any other established receiver, no T.J. Yeldon, no Landon Collins and no Trey DePriest. Of course, when you recruit the nation’s No. 1 class every single year, you’re not likely to fall far. The D-line should be fantastic.

Though they’ll be without departing coordinator Pat Narduzzi, now Pitt’s head coach, the Spartans should field another loaded defense. DE Shillique Calhoun is returning for his senior year along with LBs Ed Davis and Darien Harris. Veteran QB Connor Cook is back, too, though he’ll miss RB Jeremy Langford and WR Tony Lippett. 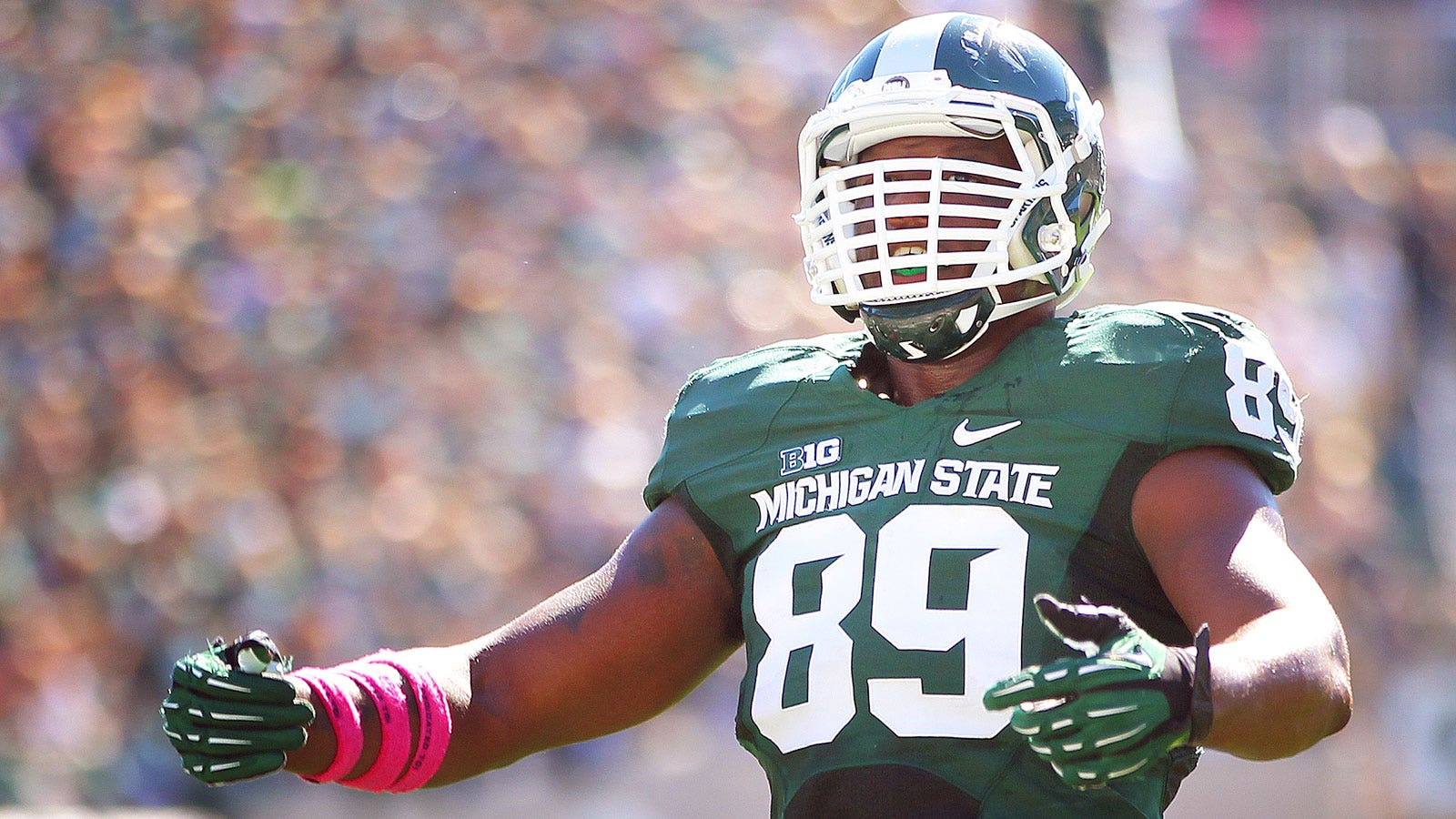 No more excuses about youth or scholarship issues. This team should be stacked, albeit without NFL entrants RB Buck Allen, WR Nelson Agholor and DT Leonard Williams. QB Cody Kessler returns after putting up All-America caliber numbers. So does the entire offensive line and freshman standouts Adoree Jackson and JuJu Smith.

Injuries and academic suspensions depleted the Irish’s 2014 defense. But now they’ll bring back essentially an entire starting lineup, led by DE Sheldon Day, LBs Jaylon Smith and Joe Schmidt and CB KeiVare Russell. And there will be no shortage of offensive skill players, just the question of whether Malik Zaire or Everett Golson is the quarterback.

The Rebels’ Peach Bowl debacle obscured a season in which they beat 12-2 Boise State, 12-2 Alabama and 10-3 Mississippi State. The Rebels will be breaking in a new quarterback but should be deep with playmakers, provided WR Laquon Treadwell returns healthy. And a defense that dominated over the first half of the season should only be more talented.

No offense to Taylor Kelly, but the Sun Devils’ offense was scarier when strong-armed Mike Bercovici took the helm for several games. It’s his job now, and he gets back all-purpose dynamo D.J. Foster and emerging complement Kalen Ballage. Coach Todd Graham also brings back nearly his entire starting defense led by a loaded linebacking corps.

The stud freshmen — RB Leonard Fournette, WRs Trey Quinn and Malachi Dupree, DT Davon Godchaux — will be sophomores. Les Miles will finally have an experienced defense, with seven starters and several key second-stringers expected back. But lack of confidence in the quarterback position keeps the Tigers from starting higher. 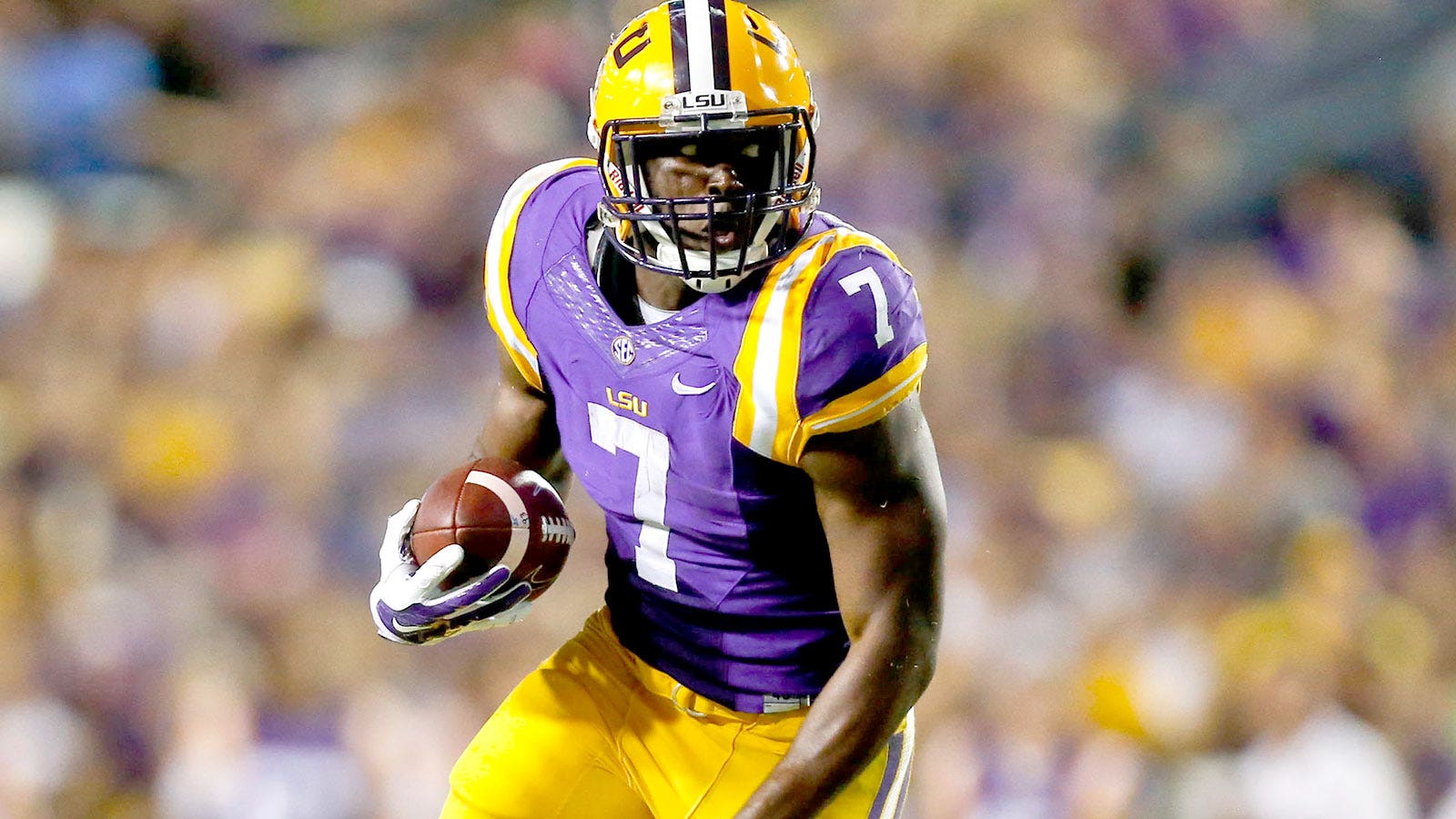 Brett Hundley was so integral to the Bruins’ success the past three years that it’s hard to forecast how Jim Mora’s team will fare without him. But UCLA as a whole will be its most talented yet under Mora, with RB Paul Perkins, LB Myles Jack and DBs Fabian Moreau and Ishmael Adams headlining 18 returning starters.

The Dawgs have some rebuilding to do on offense, starting with a new quarterback, but RB Nick Chubb could be a Heisman contender. Meanwhile, defensive coordinator Jeremy Pruitt will have a bevy of talent on his hands with the likes of LBs Leonard Floyd, Jordan Jenkins and Lorenzo Carter.

While the Broncos lose their two most important offensive players, QB Grant Hedrick and RB Jay Ajayi, they bring back just about everyone else. According to the Idaho Statesman, that includes 33 of the 34 linemen on their 2014 roster. Bryan Harsin’s Broncos aren’t quite back to their 2008-11 heyday but they’re getting closer.

Rich Rodriguez won the Pac-12 South with a relatively young team. QB Anu Solomon will enter his second season with nearly his full complement of receivers and RB Nick Wilson, though replacing both tackles is a concern. All-everything LB Scooby Wright will once again anchor the defense, though it must replace several key starters. 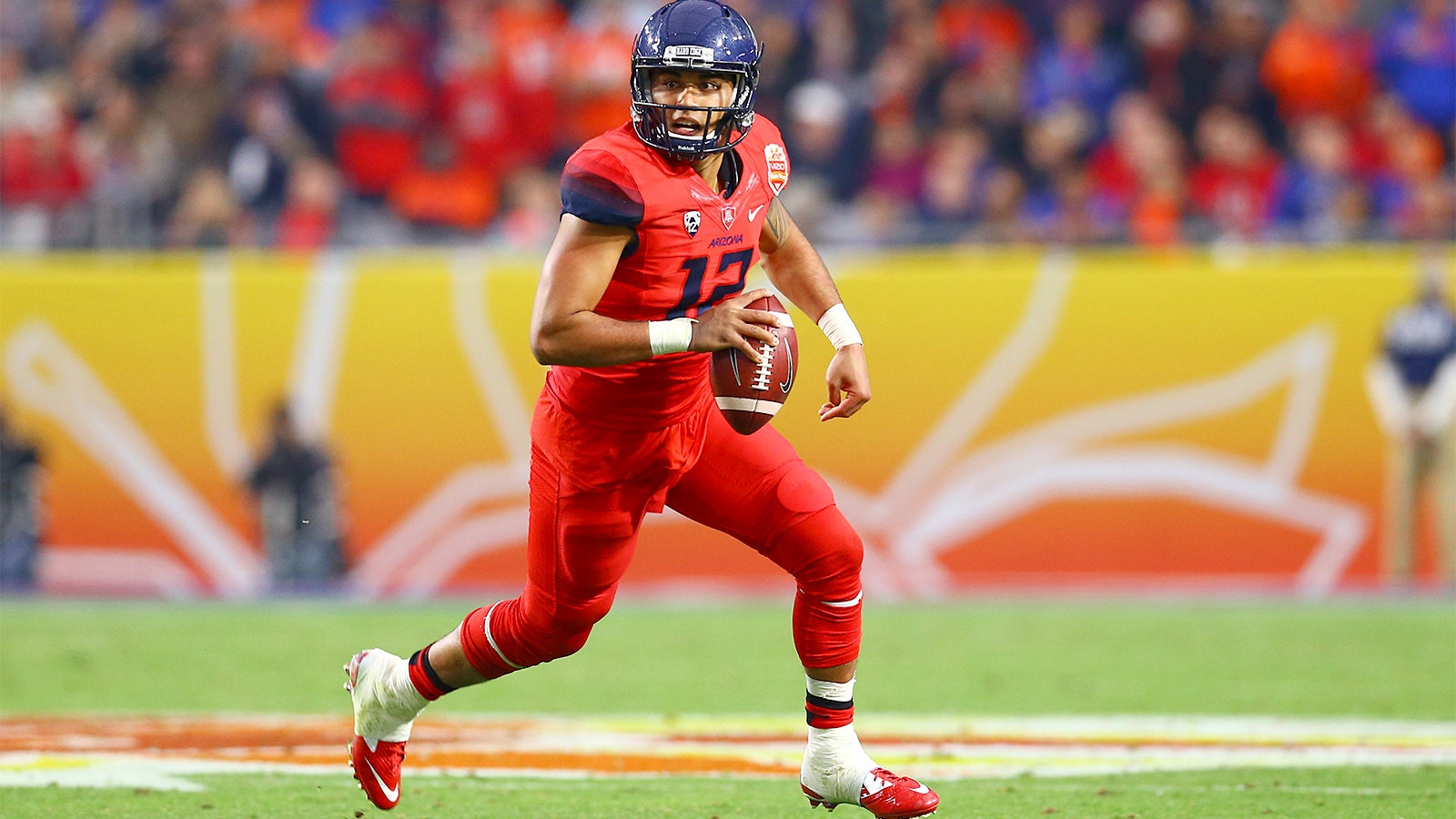 The Jackets legitimized themselves with a late-season run that included wins over Clemson, Georgia and Mississippi State. QB Justin Thomas, the breakout Orange Bowl star, is back to run Paul Johnson’s option offense. He’ll have some new faces in the backfield. Tech was not great on defense but returns the bulk of its lineup.

The Cardinal came on strong late and should be much better in 2015. QB Kevin Hogan will be a four-year starter, playing behind a veteran offensive line, and explosive RB Christian McCaffrey will finally become a regular. Defensive coordinator Lance Anderson must replace a bunch of veterans but already played deep rotations up front.

Coordinator Brent Venables produced the nation’s No. 1 defense in 2014, but unfortunately seven starters were seniors, including the entire defensive line. The Tigers may take a step back on that side of the ball but should be more dangerous on offense if sophomore-to-be quarterback Deshaun Watson returns healthy.

You know the Aggies will score. Sophomore-to-be Kyle Allen is the undisputed quarterback now, and A&M’s receiving corps will be even deeper. The Aggies could finish much higher if new coordinator John Chavis can significantly upgrade the defense. He has some building blocks in standout pass-rusher Myles Garrett and S Armani Watts. 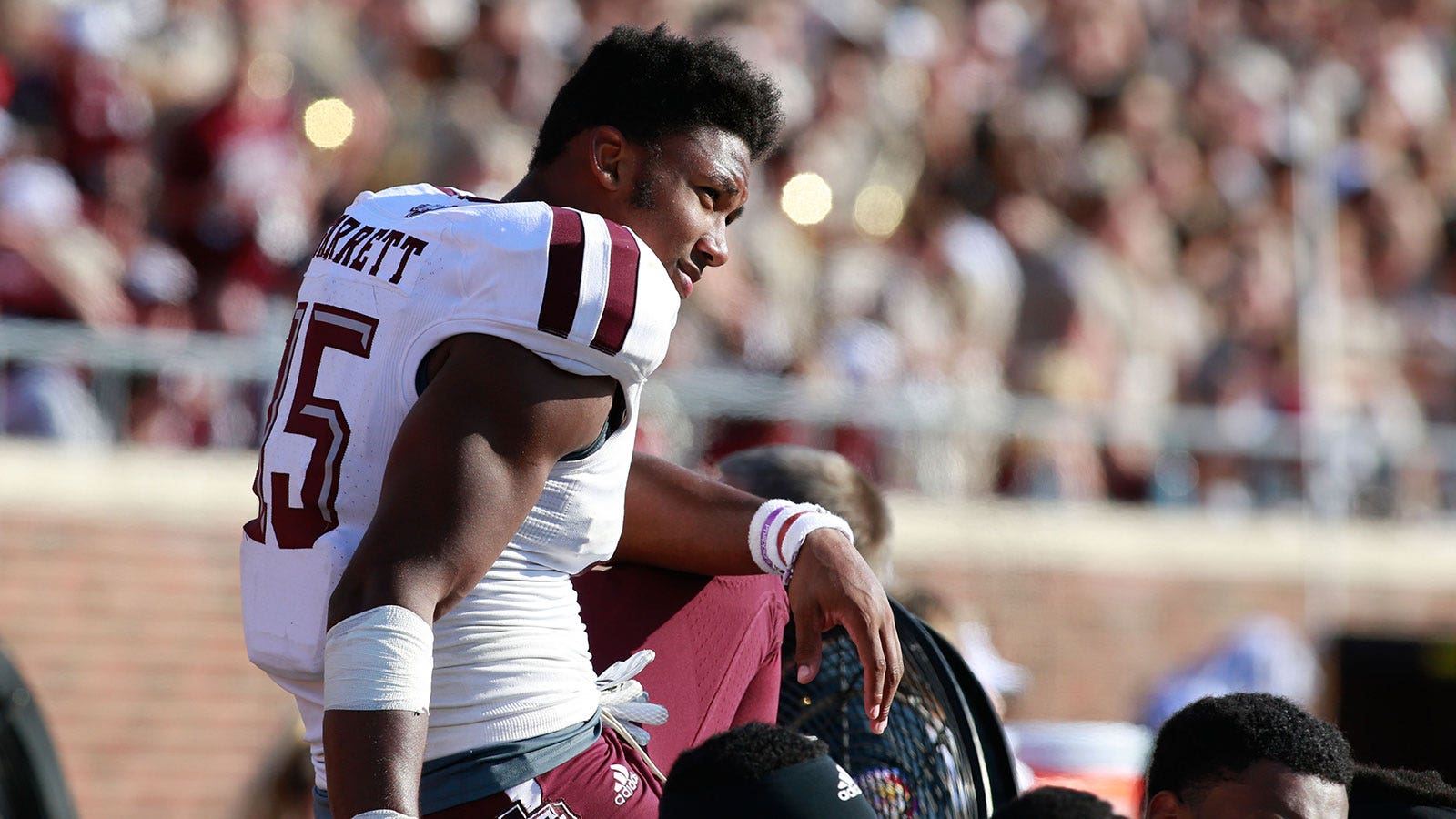 After two straight division championships and double-digit win seasons, it would be unwise to write off the Tigers, even though they face a tall task replacing several wideouts and standout D-linemen Shane Ray and Markus Golden. QB Maty Mauk enters his third year as a starter and will benefit from an experienced and talented offensive line.

The Razorbacks were one of the nation’s most-improved teams in 2014, even if their 2-6 SEC record didn’t necessarily reflect it. They shut out both Ole Miss and LSU and lost by one point to Alabama. The 2015 edition brings back most of the key pieces from an offense that began to take on Bret Bielema’s vision.

Josh Dobbs showed he’s a dangerous dual-threat quarterback equipped to run Butch Jones’ offense. Jones has dramatically upgraded the skill talent, highlighted by RB Jalen Hurd and WR Marquez North. DE Derek Barnett will be a likely preseason All-American. The Vols will benefit from having played so many true freshmen.

QB Jacoby Brissett quietly posted a tremendous season, including a 23-to-5 TD-to-INT ratio. He’s back for his senior year, as is RB Shadrach Thornton. DE Mike Rose is the best of an underrated defensive line. The Wolfpack should take a step forward in coach Dave Doeren’s third season.