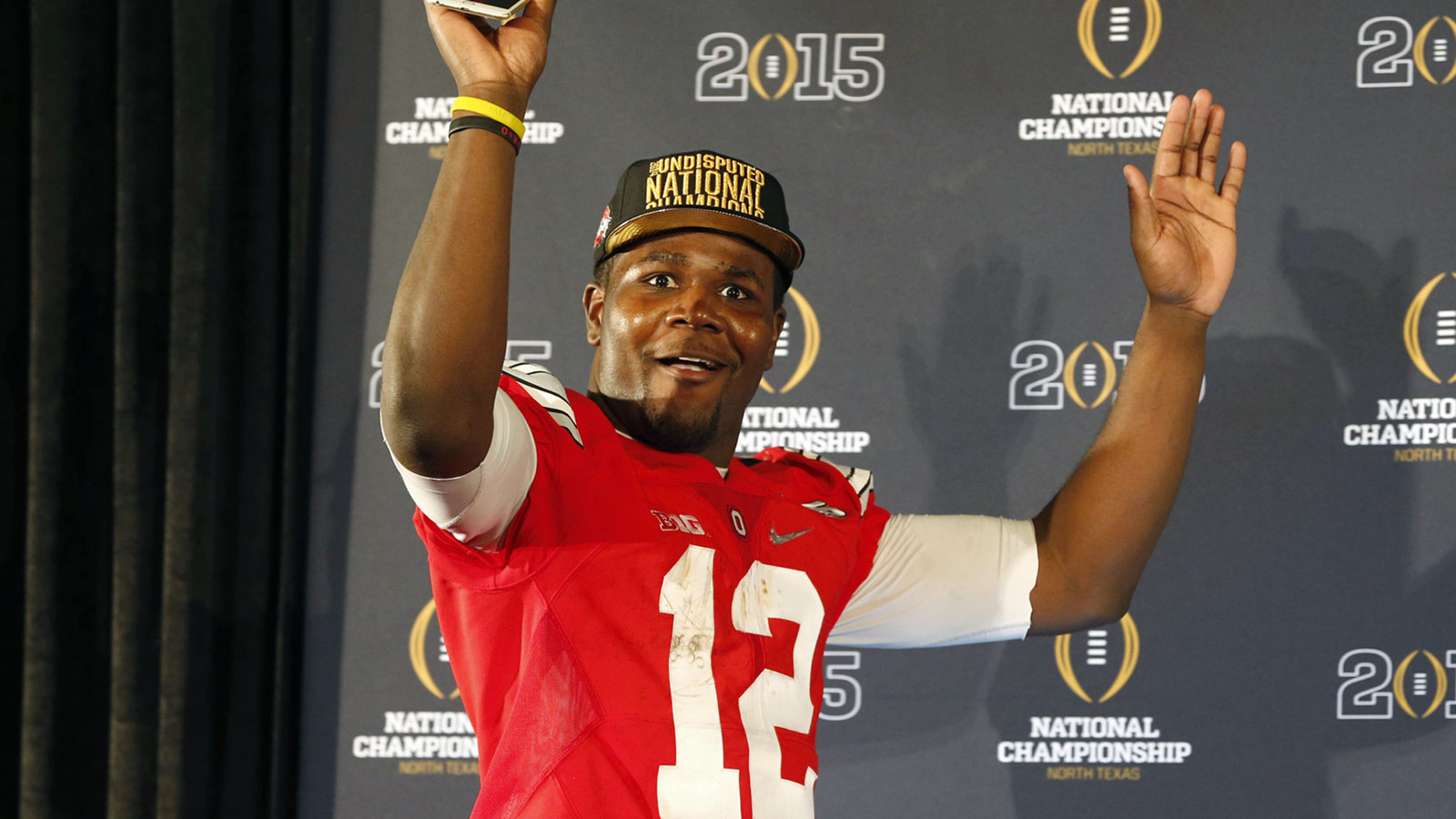 Generally, any championship in any sport is a long, arduous tale of adversity and perseverance filled with unpredictable success and joy.

Ohio State’s journey to the first college football national championship via a playoff is improbable and well deserved all at the same time.

But the dominating championship in which Ohio State lost the turnover battle (minus-three) but still totally controlled the game didn’t just fall into Urban Meyer’s lap. It was well earned throughout an entire season of hard work, difficult decisions and brutal injuries.

Had any of the following moments not taken place, who knows, maybe Ohio State wouldn’t be the ’14 national champions.

Here are the 11 biggest moments of one of the most historic seasons in college football history.

This injury cannot be overstated. Miller was a Heisman Trophy front-runner who had totaled 2,094 yards passing, 1,068 yards rushing, 36 touchdowns and just seven interceptions the year before. Miller and Meyer were 24-0 in the regular season together, and the Buckeyes’ expected starting QB was lost for the year before it even got started.

In his first career start and the season opener for the team many considered the favorite in the Big Ten, J.T. Barrett and the Buckeyes were trailing Navy 14-13 with just 4:10 minutes left. But the redshirt freshman then found Devin Smith for an 80-yard, go-ahead touchdown. It was Barrett’s first career touchdown, and it led to an eventual 34-17 win.

In just his second start behind an offensive line that had yet to gel, Barrett was harassed all night long by the Virginia Tech Hokies. Down by seven with a minute to play, Barrett and the Bucks still had a chance to come back. However, the OSU quarterback was intercepted by Donovan Riley, who returned the pick for a game-clinching touchdown with 46 seconds left. Most (myself included) left the Buckeyes for dead.

Joey Bosa, who would go on to win Big Ten Defensive Player of the Year honors, made his presence felt with 3.5 sacks against Penn State in front of a sold-out "White Out" home crowd in Happy Valley. With the season hanging in the balance in double overtime, Bosa recorded his third and final sack to clinch the win on the game’s final play.

In the biggest game of the year and with the East Division title hanging in the balance against then-No. 8 Michigan State and one of the best defenses in the land, Barrett put on a show. The QB threw for 300 yards, rushed for 86 yards and scored five touchdowns — the last of which was a seven-yard TD toss early in the fourth quarter that put the game out of reach. The Bucks won 49-37.

In what appeared to be the slowest 86-yard touchdown run in the history of football, Barrett outran the Minnesota secondary to give the Buckeyes a critical road win over a ranked opponent. It was one of three records Barrett broke in the game — long run by a QB, rushing yards in a game by a QB (189) and most TDs in a season (38). It was OSU’s second straight and second overall win over a ranked foe at the time.

An emotional week that featured the tragic loss of teammate Kosta Karageorge ended with a costly victory in "The Game" over archrival Michigan. On the first play of the fourth quarter of a one-score game, Barrett broke his ankle, putting an end to his breakout season. Cardale Jones took his place and in his first full drive as a starter, led OSU to a touchdown when Ezekiel Elliott broke a 44-yard touchdown run on a fourth-down call. The Bucks went on to easily defeat the school from up North. 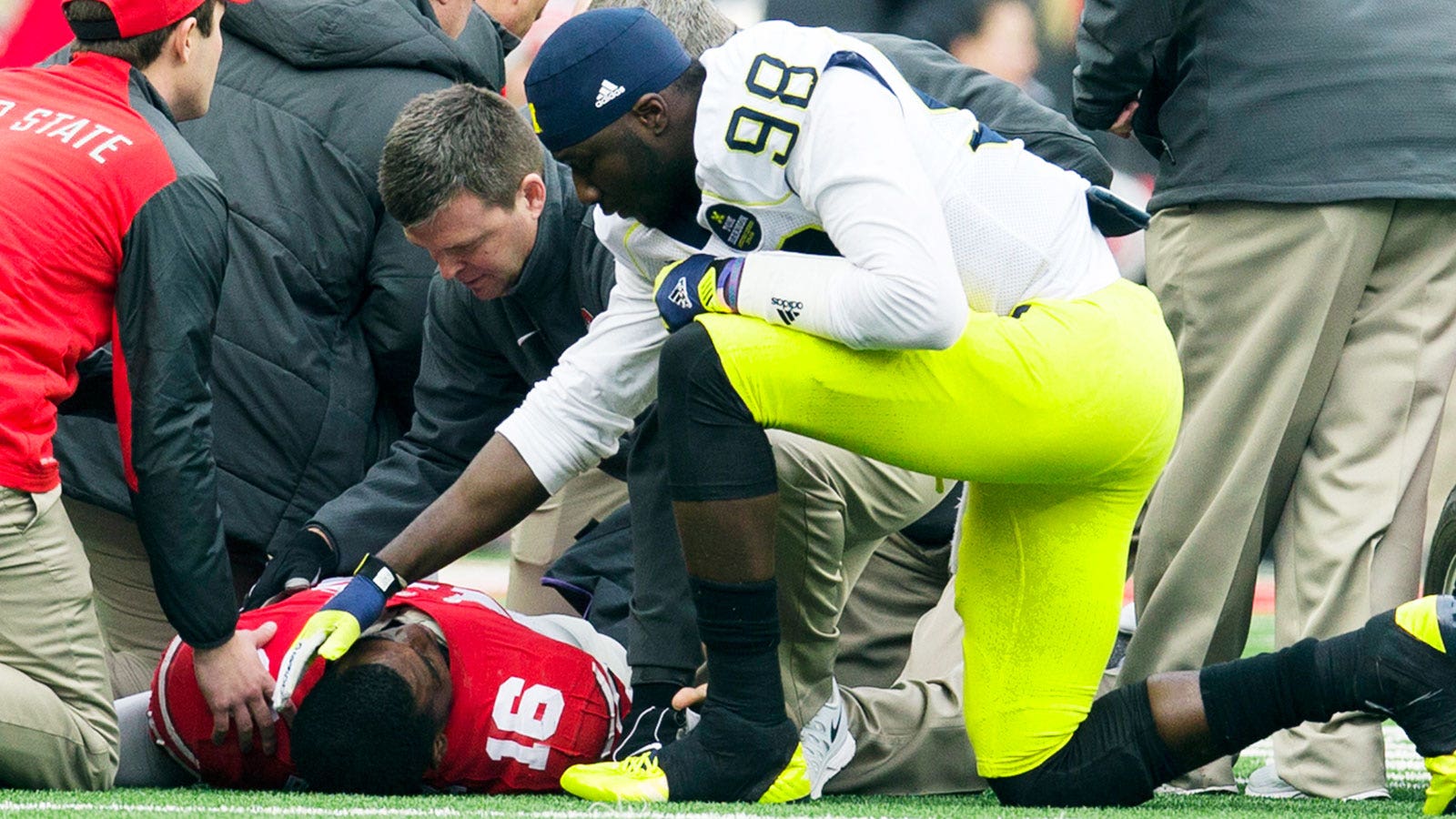 Less than two minutes into the Big Ten Championship Game, Jones, making his first career start, connected with Devin Smith for a 39-yard touchdown. The throw shows off Jones’ arm and his ability to stretch the field vertically. Ohio State would score 52 more points in the title game rout that would eventually land the Buckeyes in the inaugural College Football Playoff.

After falling behind 21-6 halfway through the second quarter, Ohio State made it a one-score game after a short Elliott TD run. Then with 12 seconds left in the half, Urban Meyer and offensive coordinator Tom Herman dialed up the best trick play in the history of the Sugar Bowl. An apparent end-around with an added wrinkle resulted in wide receiver Evan Spencer throwing a dart to Michael Thomas to make the score 21-20 at halftime.

Nursing a scant six-point lead with just over three minutes left in the game on a critical third down, Elliott broke through a stacked box and rumbled 85 yards to score and seal a trip to the national title game.

After a solid start to the first drive of the second half, Jones was picked off by Oregon’s Danny Mattingly with 11:33 left in the third quarter. The Ducks promptly scored on the next play, as Marcus Mariota found Byron Marshall for a 70-yard score. Six plays into the ensuing drive; Jones did his best Jameis Winston impersonation by gifting the Ducks the football on the OSU 32-yard line. The Ducks used five plays to eventually kick a field goal and cut the lead to 21-20. But Ohio State finished the heated third quarter with a dominating 12-play, 75-yard drive that ate up 6:39 on the clock and ended with an Elliott touchdown run on the final play of the quarter. The exchange gave Oregon every chance to take control, but the Buckeyes survived two turnovers and answered back with a heavyweight counterpunch.