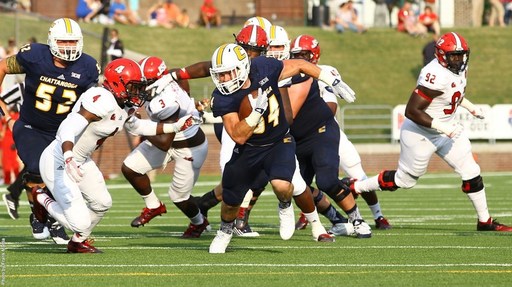 (STATS) – ESPN executives would love the first FCS game of the 2017 college football season to resemble the close matchups between Chattanooga and Jacksonville State in recent years.

The two nonconference rivals will square off again next year in the season-opening spotlight for the FCS level, Aug. 27 at the renovated Cramton Bowl in Montgomery, Ala. The Montgomery Kickoff Classic, announced Wednesday, will air on ESPN at 8 p.m. ET.

The matchup, originally scheduled for Sept. 2 at Jacksonville State, will be the first at a neutral site since the FCS opener has aired on ESPN in 2014. The home team has won the first three Kickoffs – Eastern Washington beat Sam Houston State in '14 before five-time FCS champion North Dakota State played in the last two matchups, losing to Montana last year and beating Charleston Southern two months ago.

“It's a great opportunity to showcase our program and FCS football to a massive audience,” Jacksonville State athletic director Greg Seitz said.

Added Chattanooga athletic director David Blackburn, “We are thrilled to be chosen as a part of the kickoff to the 2017 college football season. We're grateful for the opportunity to showcase our university and compete against Jacksonville State on the national platform of ESPN.”

Since 2012, Jacksonville State has beaten Chattanooga four straight times, but only by three points or in overtime. Last season, the Gamecocks won twice, 23-20 in the season opener and 41-35 in overtime in the second round of the FCS playoffs. Chattanooga holds the series lead 25-15.

Jacksonville State has won two straight outright titles in the Ohio Valley Conference and was the national runner-up last season. Chattanooga has won three straight championships in the Southern Conference, including an outright title in 2014.

They aren't playing each other this season. Jacksonville State (4-1) is ranked third in the STATS FCS Top 25 and Chattanooga (6-0) is fifth.

The 25,000-seat Cramton Bowl is the site of the Raycom Media Camellia Bowl, which is controlled by ESPN. It was the home of the discontinued Blue-Gray Football Classic, which was played on Christmas Day.