DALLAS —There is no bigger advocate for the state of South Carolina than Gamecocks junior center A’ja Wilson. She grew up in Hopkins, S.C., a 20-minute drive from the University of South Carolina campus in Columbia and a town Wilson described as “chill, with a bunch of woods, and nice and quiet.” Anytime over the weekend when Wilson was asked why she stayed home to play basketball, you might as well have been talking to a member of the state’s tourism division. She could not hype the state of South Carolina enough.

On May 10, 2008, when South Carolina coach Dawn Staley was hired from Temple, Wilson was just 11 years old. She doesn’t remember much about the press conference other than her parents telling her that South Carolina had hired a new women’s basketball coach. Over the years Staley and her coaching staff naturally kept tabs on Wilson given her status as the emerging basketball prodigy from just down the road. Wilson took a long time to make her college decision—she says she fell in love with a lot of programs, including UConn—but finally declared in the spring of her senior year. She said the biggest factor that ultimately drew her to South Carolina was that Staley had done everything she wanted to do as a player. She wanted that kind of success for herself and now she has something that even the Hall of Famer Staley does not have—a national championship as a player.

On a cloudy Sunday night in Dallas, Wilson delivered South Carolina its first national championship in basketball, a 67–55 victory over conference rival Mississippi State, the likeable underdogs who had shocked UConn in the national semifinals on Friday night. In the end, Mississippi State could not handle Wilson, who dominated the post on both ends with 23 points, 10 rebounds and four blocks. She was named the Most Outstanding Player of the Final Four, a runaway choice.

“I remember tweeting that I wanted to be like LeBron and bring one home, and now I know the feeling of it,” Wilson said outside the South Carolina locker room after the game. “The state has done so much for me and now I can return it with a national championship. I can’t even put into words what it’s like when you have done something for your state. I am honored to wear these words (South Carolina) across my chest.”

With the game safely tucked in in her pocket, Staley hugged her assistant coaches with about 25 seconds left. Then she watched the final seconds bleed out in Dallas. At 7:12 p.m. Central Time, she joined Baylor coach Kim Mulkey as the only women to win an Olympic basketball gold medal as a player and also coach a national champion in college basketball. Staley is the first Most Outstanding Player of a Final Four to coach a team to a national title. (She was named the Most Outstanding Player at the 1991 Final Four when her Virginia team suffered a 70–67 overtime loss to Tennessee.) She is also just the second African-American woman (along with Carolyn Peck, who led Purdue to a title in 1999) to coach a team to a Division I title in women’s basketball. 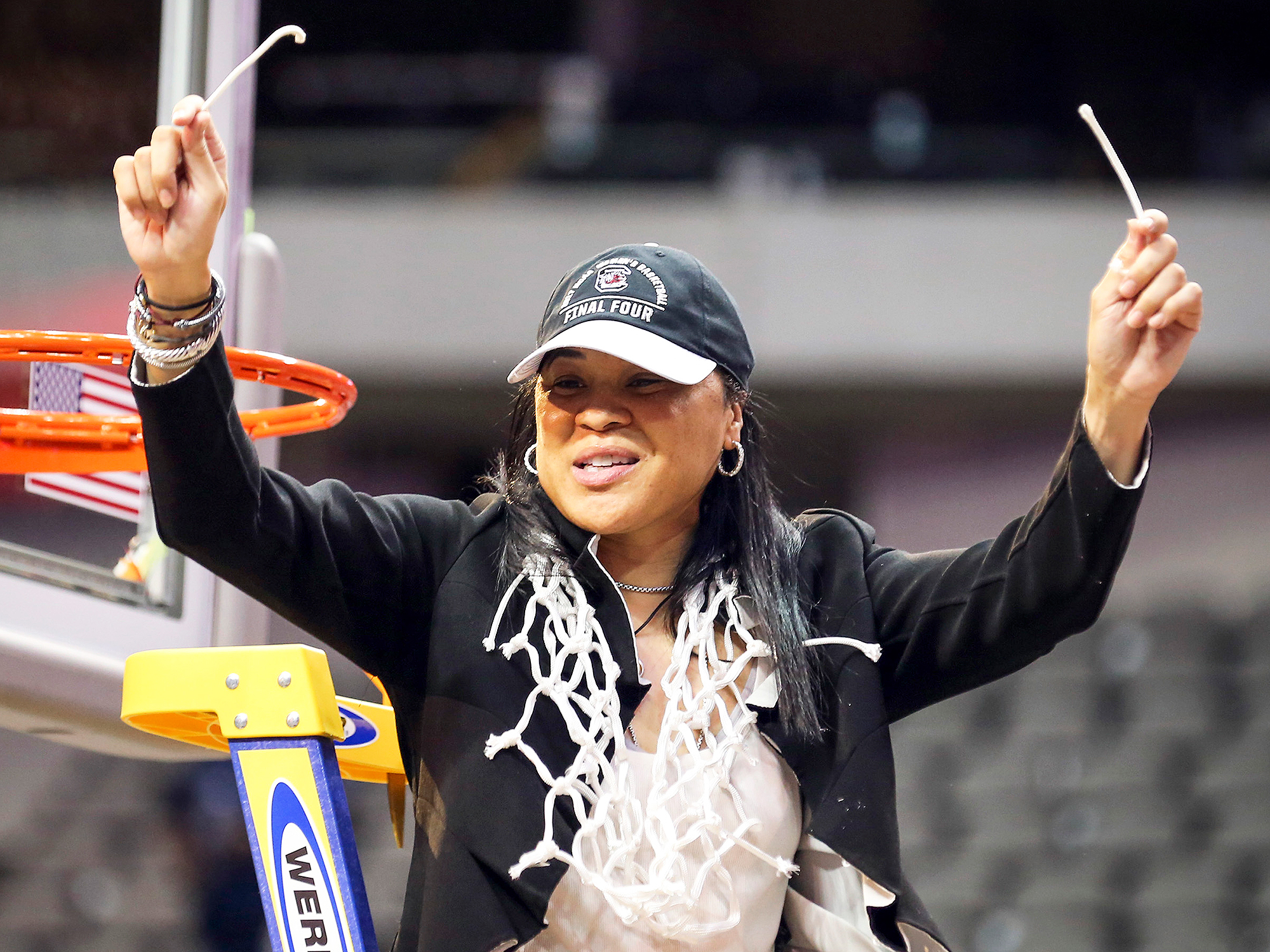 “I can check off one of the things that has been a void in my career,” Staley said. “National championship games and Olympics. Those were the things that I held dear and near to me when I was growing up, because those are the things that I wanted. That’s what I was shooting for. When I couldn’t get it done in college, I thought that was it. I never wanted to be a coach. I never wanted to be sitting where I’m sitting. The late Dave O’Brien, the athletic director at Temple University, saw something in me that I didn’t see in myself. He asked me to come and be a part of changing the program at Temple. From then on I really can’t see myself doing anything other than what I’m doing, impacting the lives of young people. To be able to check this box off in my career, I’m really grateful and thankful that he made this possible.”

For that she can thank Wilson, who emerged this month as the clear best player in the country. South Carolina scored 42 points in the paint (to Mississippi State’s 22), including eight points from Wilson in the final quarter after Mississippi State had closed the lead to 54–50 with 6:54 left. When the buzzer sounded, Wilson did not make to the court for the scrum of players jumping on each other. She put a towel over her head and sobbed at the bench and later sobbed again during an interview with ESPN’s Holly Rowe. She finally walked off the court 48 minutes after the final buzzer after she and junior guard Kaela Davis danced in front of the South Carolina marching band.

The loss ended a dream tournament run for Morgan William, the 5’3″ junior point guard from Mississippi State whose 14-foot jumper with time expiring in overtime on Friday ended UConn’s 111-game winning streak. But the final against South Carolina was a nightmare for William. She was hounded by the speedy South Carolina junior point guard Bianca Cuevas-Moore and benched for long stretches by Mississippi State coach Vic Schaefer. William played just 23 minutes, scoring eight points and lacking impact on defense against South Carolina’s bigger guards. “If we lose in the championship game, people will think of us as underdogs who got lucky against UConn,” William said on Saturday. “I just want to finish it off.”

Wilson didn’t necessarily agree with that sober assessment. “She had a great tournament,” Wilson said of William. “All respect to her. She brought it everywhere on offense and defense. I think B (Cuevas-Moore) came in with that dog and fight in her. She would not let up.”

Mississippi State actually jumped out to an early 7–1 lead behind five points from junior guard Victoria Vivians in the first three minutes, but the game changed quickly. Keyed by the defense of Cuevas-Moore, South Carolina was able to disrupt the Mississippi State offense and finished the first quarter on a 17–7 run. Wilson started heating up on the inside in the second quarter and the Gamecocks also got quality minutes from junior guard Allisha Gray, who matched up the last month with post players at an undersized 6’1″ and finished the game with 18 points, 10 rebounds and a deserved spot on the All-Tournament team. South Carolina led 36–26 at the break, a reversal of its earlier games against Mississippi State this season where it trailed by seven at the half on Jan. 23 and led by three in the SEC tournament title game.

“We just weren’t executing offensively, we weren’t putting the ball in the basket and we weren’t getting stops, which doesn’t have a good recipe,” said Mississippi State guard Dominique Dillingham. 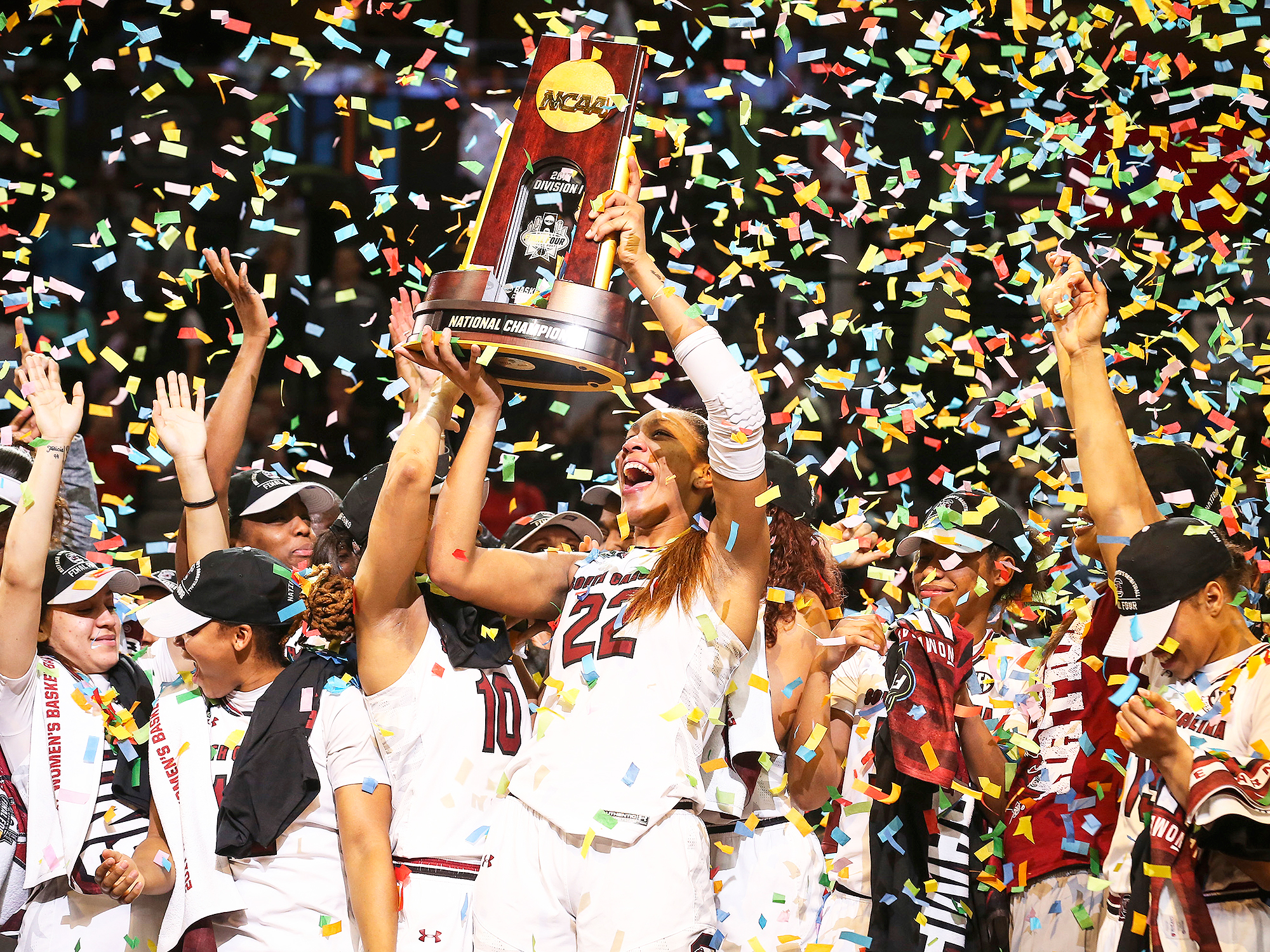 “South Carolina, they have a habit of making it hard for you to execute,” said Schaefer, who is now 0–9 against Staley. “I said that about Connecticut. Because they’re such a great oiled machine offensively, nobody wants to talk about how good a defensive team that team is. Same thing with South Carolina. Talk about A’ja Wilson, Gray. Let me tell you something, those kids guard your butt. They’re just hard to handle.”

During the SEC tournament, the Gamecocks lost their second best player—senior center Alaina Coates—so Staley and the coaches were forced to play a smaller lineup to create driving lanes. They went from basically a two-post team to a four-around-one team. That opened up the court for players like Davis and Gray to emerge, but Staley made sure in interviews that Coates was not forgotten. On the podium after the game, she screamed out “We miss Alaina Coates so dearly. Lay, we got you a ring!”

Wilson suffered an even bigger loss in October with the passing of her 95-year-old grandmother, Hattie Rakes. She dedicated the season to her and has a tattoo of her name on her left arm. Wilson said after the game that her grandmother “was within me this game.” Staley believed that if Wilson had played anywhere but her home university, she would have transferred back home after Rakes’s death.

Outside of South Carolina’s locker room an hour after the game, Staley wore the net from the arena around her neck and thought about Wilson’s decision three years ago that set this memorable night in motion. 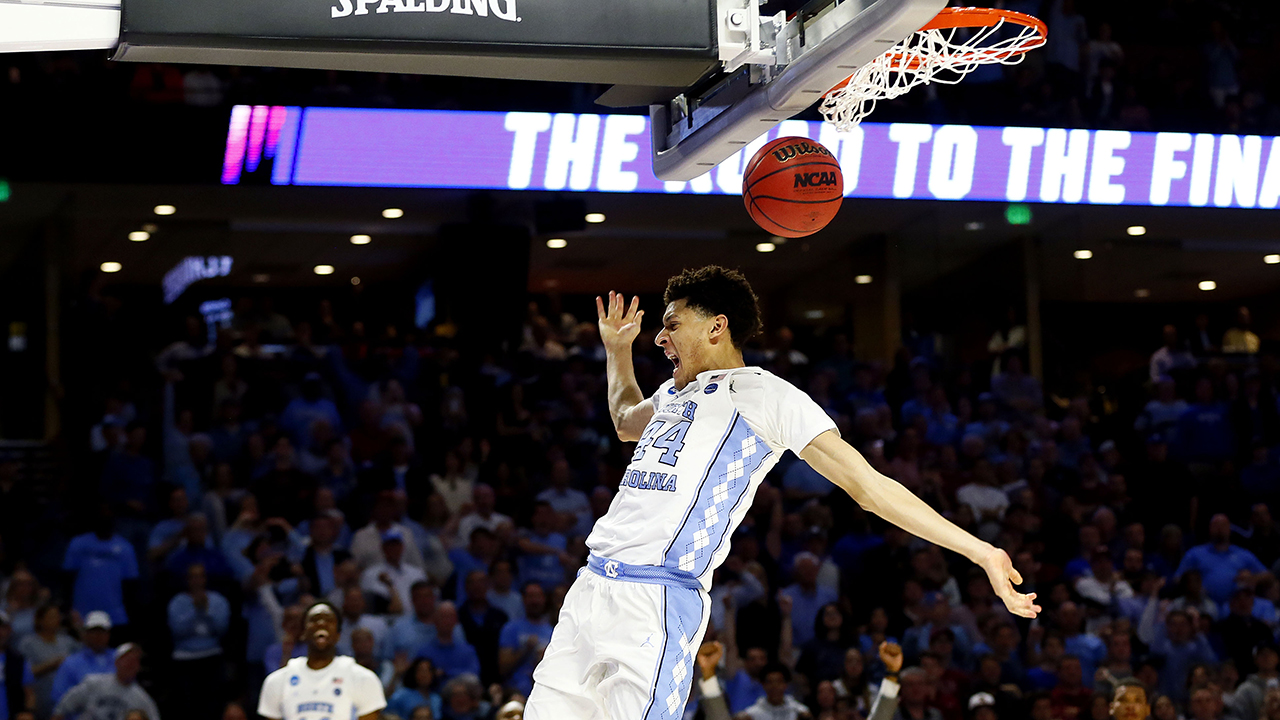 Gallery: Why North Carolina will beat Gonzaga and win the NCAA tournament