Apparently that left the Indians starting pitching staff wanting electronics, too, inspiring the fivesome to seize an opportunity to capture a milestone ball of their own for personal gain: the first-hit ball by top prospect Francisco Lindor.

The 21-year-old shortstop made his MLB debut on Sunday as a designated hitter. He swatted a single (more on that) for his first hit in the ninth inning and now he has to contend with Trevor Bauer and the rest of the Indians starters if he wants the memento.

"Requests." Come on, guys! That’s a pretty soft ransom note. Also it appears no one has forgotten Marc Rzepczynski’s demand for a 50-gallon drum of lube.

Hey @Lindor12BC we have your ball. @indians Bullpen settled for @tim_cook Apple products but we want @samsungmobileus pic.twitter.com/maidUA0Y1y 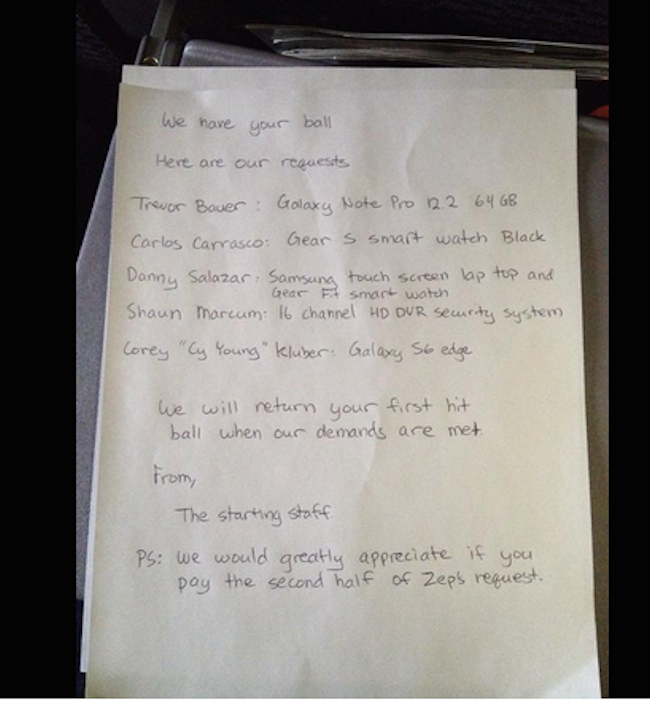 As for Lindor’s single: He thought he had extra bases and rounded first only to record his first MLB tumble instead of a double.

.@Lindor12BC talks about his big-league debut, first hit and the fall heard 'round MLB: http://t.co/7rp4sLXvtX https://t.co/ewzSmkEj5P

By the way, Gregory Lee is the president and CEO of Samsung Electronics North America. Good luck, pitchers.