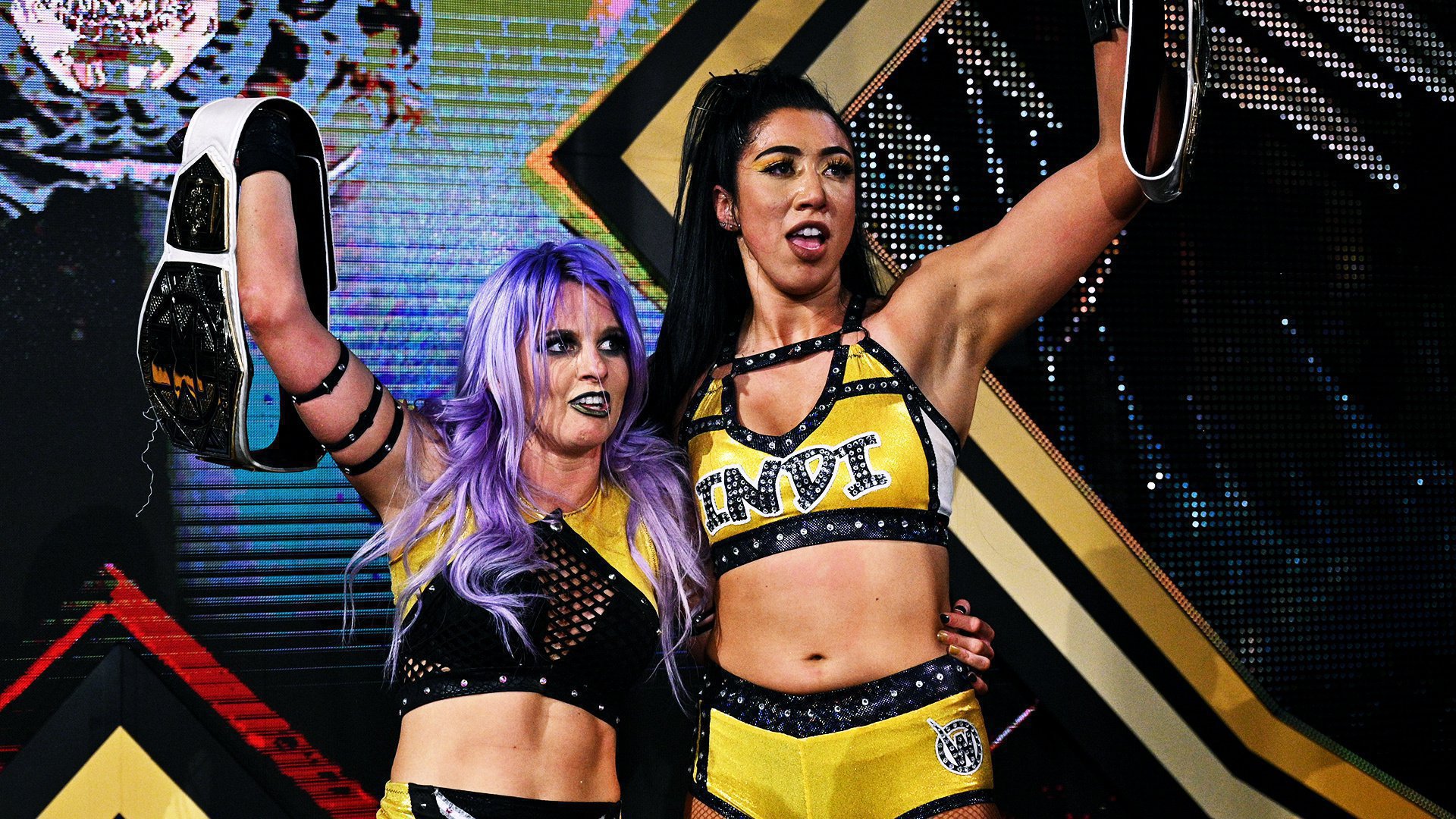 With a heated issue that has escalated before the NXT Universe's eyes week by week, Isaiah "Swerve" Scott and Leon Ruff upped the ante with fitting brutality, battling throughout the Capitol Wrestling Center. Ruff dug deep into his bag of tricks with an avalanche crucifix bomb and a poison rana off the apron to the outside and even bashed "Swerve" with a toolbox. But Scott received assistance from former NFL defensive lineman and WWE Performance Center recruit AJ Francis, who caught Ruff off the staging hour before he dropped him in savage fashion. By then, a "Swerve" victory was academic following the JML Driver, and he left with an entourage that featured Francis, Ashante "Thee" Adonis and Briana Brandy.

The Technical Savage withstood an upstart effort from Asher Hale, taking care of business with the Cave-In.

This tag team contest was as hard-hitting as expected, though no hit was harder than Timothy Thatcher walloping Zack Gibson upside the head with Wade Barrett's stray shoe. "The Professor of Pain" followed with the fujiwara armbar, forcing Gibson to tap out.

Kyle O'Reilly fearlessly confronted NXT Champion Karrion Kross, but they were soon joined by Pete Dunne and former NXT Champion Finn Bálor, who all jockeyed for a potential opportunity to face Kross. The situation quickly broke down into an all-out brawl that ended with Kross standing tall before he was attacked by Johnny Gargano and Austin Theory, who left him laid out a week before Kross faces Theory.

The Warrior of the Sun again wowed the NXT Universe in her second bout on the black-and-gold brand, devastating Zayda Ramier with a brutal closing sequence: a spinning heel kick, German suplex and an Exploder suplex for the win.

Though he made his way to the ring with yet another boastful rant, LA Knight again backed up his talk, putting away Jake Atlas after hitting him with the BFT.

All four women sacrificed their bodies in hopes of walking out with the gold, and Candice LeRae & Indi Hartwell raised the NXT Women's Tag Team Titles high as new champions.

Chairs, trash cans, a coffee mug and even a fire extinguisher were all used, but Shotzi Blackheart took the action to new heights — literally. The daredevil Superstar scaled the ringside scaffolding to deliver a jaw-dropping splash to Hartwell through the announce table.

Hartwell & LeRae got the better of the chaos later, however, as Hartwell drove Ember Moon through a table with an elbow drop, while LeRae smashed Blackheart with a Wicked Stepsister on a steel chair to earn the breakthrough victory.

Will the third time be the charm for The Way against Shotzi & Ember?

Can The Way make the third time the charm?

The Way have coveted the championships since their unveiling, but Blackheart & Moon represent the constant hurdle they’ve been unable to clear. LeRae & Hartwell came up short in their Dusty Classic Semifinal Match in February and failed to dethrone Blackheart & Moon at TakeOver: Stand & Deliver.

This encounter figures to be much more brutal, and LeRae & Hartwell already set a savage tone with merciless ambush last week on NXT, capped off by Hartwell smashing a vase over Blackheart’s head.

Have The Way unlocked the ruthlessness they need to capture the gold? Or have they only lit a fire in their adversaries?

See who walks out with the titles this Tuesday night at 8/7 C on USA Network!

The next chapter between Leon Ruff and Isaiah “Swerve” Scott is likely to be the most brutal yet.

The heated rivals will clash in a Falls Count Anywhere Match that will kick off NXT this Tuesday night.

“Swerve” seemed to think he had the last laugh with a victory over Ruff last month, but Ruff made it clear that their issue was far from over when he attacked Scott backstage.

Though he admitted to being surprised that Ruff was capable of that viciousness, “Swerve” offered an appropriate retort: a challenge for a Falls Count Anywhere Match.

Catch NXT this Tuesday night at 8/7 C on USA Network to see where the unique stipulation takes these nemeses!

Ciampa & Thatcher to square off with GYV

Who deserves the next NXT Tag Team Title opportunity?

Tommaso Ciampa & Timothy Thatcher and The Grizzled Young Veterans are staking their claims, and they’ll clash in what promises to be a pivotal tussle this Tuesday night on NXT at 8/7 C on USA Network.

After coming up just shy of capturing the then-vacant titles at NXT TakeOver: Stand & Deliver, GYV believe they’re still at the front of the line. But reunited, Ciampa & Thatcher have turned their attention to the championships as well, and they fired the first shot in beating Zack Gibson & James Drake out of the ring last week.

Be sure to tune in to NXT this Tuesday night to see which duo moves a step closer to the gold.