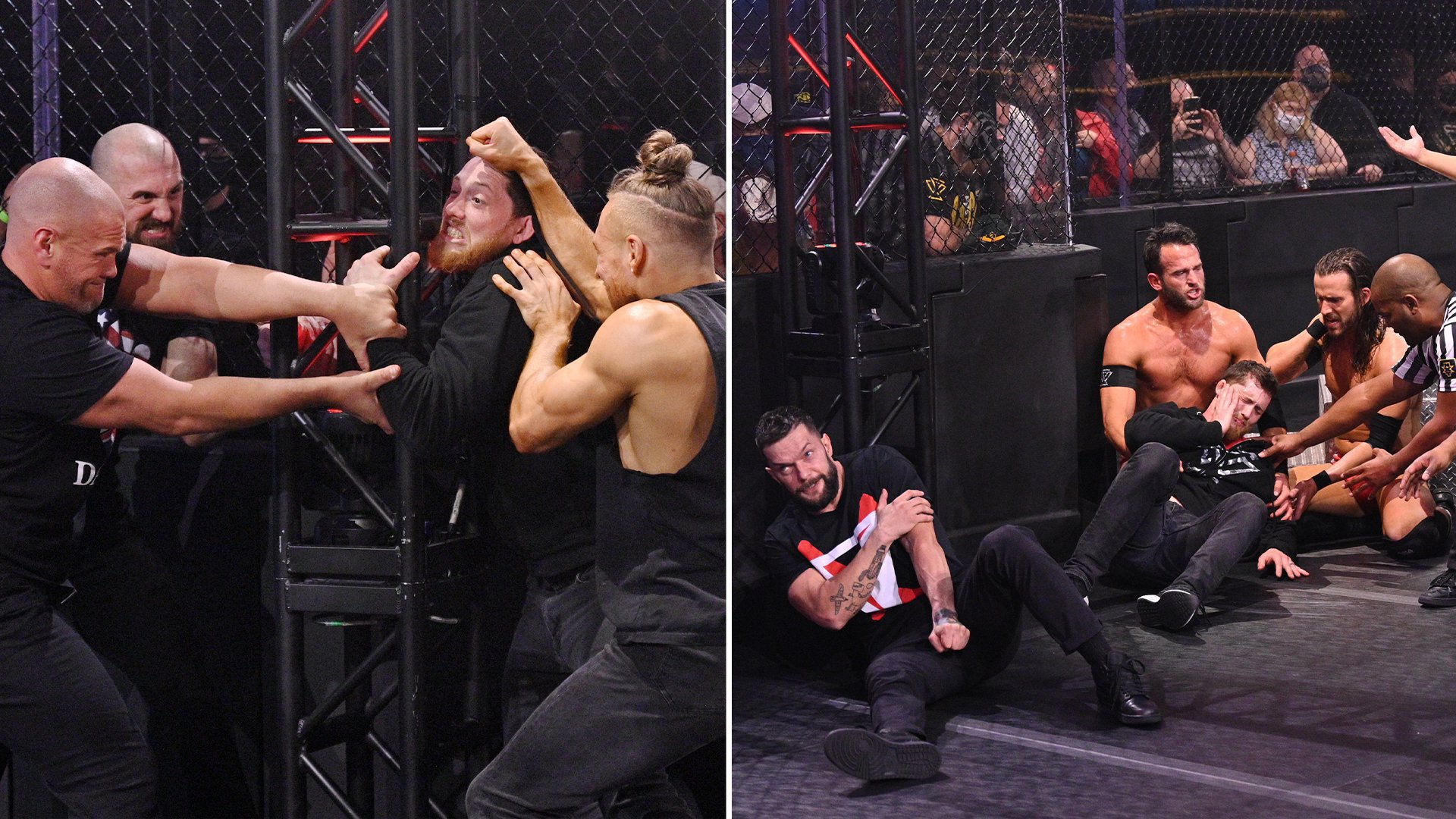 Adam Cole & Roderick Strong prevailed in a thrilling Dusty Cup battle against Breezango, but Pete Dunne inflicted major carnage in his bid for an NXT Title opportunity against Finn Bálor. Elsewhere, The Grizzled Young Veterans and the debuting MSK also advanced in the Dusty Classic, Candice LeRae scored a win over Shotzi Blackheart, and more.

Shotzi Blackheart may have surprised Candice LeRae early, using mat-based wrestling to ground The Poison Pixie instead of her usual high-flying repertoire. LeRae answered, pulling Blackheart into the Gargano Escape until Blackheart countered with a knee to the face and followed by spiking LeRae with a DDT. Blackheart looked to be setting up for her top-rope senton before Indi Hartwell distracted her, and LeRae capitalized by hitting a huge spinning neckbreaker off the second rope for the victory.

With the NXT Championship still over his shoulder following his hard-fought win over Kyle O'Reilly, Finn Bálor addressed the NXT Universe before being interrupted by Pete Dunne. The BruiserWeight, joined by NXT Tag Team Champions Oney Lorcan & Danny Burch, made it clear he's next in line for a title opportunity, and he quickly attacked The Prince. Bonded with Bálor by mutual respect, O'Reilly made his way to the ring to provide backup, and fellow Undisputed ERA members Adam Cole & Roderick Strong also joined to even the odds and fight off Dunne and company.

Despite being massive underdogs, Ever-Rise stunned The Grizzled Young Veterans early with a quick start. Zack Gibson & James Drake eventually isolated Chase Parker, but Parker found a way to tag in Matt Martel, who blew away both Grizzled Vets. Riding high confidence from a strong showing, Ever-Rise came close to victory after Parker launched Drake into a Spear by Martel, but Gibson broke up the ensuing pin attempt. Gibson & Drake's craftiness won out, and they hit the Ticket to Mayhem to advance in the tournament.

Dexter Lumis overwhelmed Johnny Gargano with his strength before a high risk proved costly, as the North American Champion evaded a Swanton Bomb. NXT's Tortured Artist attempted to lock Johnny Wrestling in Silence twice to no avail, and Austin Theory interjected himself on the third attempt, allowing Gargano to surprise Lumis with a quick pinning combination.

Gargano and Theory both paid the price afterward, though, as Kushida — who will team with Leon Ruff against them next week in the Dusty Classic — sent Gargano a message by applying the Hoverboard Lock, while Lumis locked in Silence on Theory.

Nash Carter & Wes Lee of MSK made an immediate impact in their NXT debut, dazzling the Capitol Wrestling Center with their high-flying offense. The unlikely team of Isaiah "Swerve" Scott and Jake Atlas impressed in spite of their recently rivalry, matching MSK with a barrage of hyper-athletic attacks as well. "Swerve" & Atlas looked poised for victory after a spinning powerslam and 450 splash, but Carter broke up Scott's pin.

Xia Li looked almost unstoppable for the second straight bout, this time dismantling Valentina Feroz in short order, pinning her after a huge right hand to the jaw and a devastating spinning kick to the face. Afterward, her shadowy leader seemingly commanded more punishment, and Li dutifully unleashed a series of ruthless strikes on Feroz at ringside, leaving her further battered.

In a huge first-round battle pitting former NXT Tag Team Champions against one another, both Adam Cole & Roderick Strong and Breezango pulled out all the stops in hopes of advancing a step closer to the Dusty Cup. But they weren't alone, as the tension between The UE and Pete Dunne and company spilled over with Dunne, Lorcan & Burch hitting ringside to attack O'Reilly. United with O'Reilly by a common enemy, Bálor joined the fray to help even the odds, but he couldn't stop Dunne from savagely blasting O'Reilly's injured jaw with a huge forearm and kick against the barricade.

Cole temporarily took his eyes off the ball out of concern for his fallen ally at ringside, and Fandango sought to take advantage, countering Cole's Panama Sunrise. But the former NXT Champion had a perfectly timed counter of his own, meeting Fandango off the top rope with big superkick for the win.

Though The UE advanced, they clearly also suffered significant casualties, as O'Reilly lied in bad shape at ringside.

The Undisputed ERA already know what it takes to win the Dusty Rhodes Tag Team Classic. Can they hoist The Dusty Cup yet again?

Adam Cole & Roderick Strong look to take their first step toward accomplishing that exact goal when they take on Breezango as the 2021 classic kicks off tonight on NXT.

NXT’s most decorated faction — and the winners of the 2018 tournament with Cole and Kyle O’Reilly prevailing — figures to be a heavy favorite among the 2021 field. But for all their out-of-the-ring antics, Breezango showed in 2020 that they’re far from a pushover, capturing the NXT Tag Team Titles.

See which team advances tonight on NXT at 8/7 C on USA Network!

Is there another curse heading Johnny Gargano’s way?

After successfully defending his NXT North American Championship and breaking his curse against Leon Ruff last week at NXT New Year’s Evil, Johnny Gargano is back in action tonight against Dexter Lumis in non-title action.

The host of last week’s festivities will put down the artist utensils and shift his cold eyes back to the ring with a serious opportunity to knock off Gargano and get himself in the NXT North American Title conversation. But will Gargano’s colleague in The Way, Austin Theory, prove to be too much of a roadblock for Lumis to overcome at ringside?

Tune into NXT tonight at 8/7 C on USA Network to find out!

Fire the war cannons – Shotzi Blackheart will roll into battle against Candice LeRae tonight on NXT.

The rivalry has continued to escalate, as Blackheart has made it her mission to deal The Way one devastating blow after another. Blackheart teamed with Kushida last week to defeat Candice LeRae & Johnny Gargano in a Mixed Tag Team Match at NXT New Year’s Evil. LeRae, however, claimed a victory when their two teams matched up in a WarGames Match, but the larger conflict rages hotter than ever.

Who will emerge victorious in the latest showdown between Blackheart & LeRae?

The 2021 Dusty Rhodes Tag Team Classic represents unfinished business for The Grizzled Young Veterans, and this time they intend to finish the job.

The Grizzled Young Veterans soared to the finals of last year’s classic, knocking off Kushida & Alex Shelley and The Undisputed ERA before falling just short against Pete Dunne & Riddle.

Hailing themselves as the “best tag team of this generation,” Gibson & Drake are no strangers to Chase Parker & Matt Martel, who will be looking to pull off a major upset.

Tune in to NXT to find out who emerges victorious!