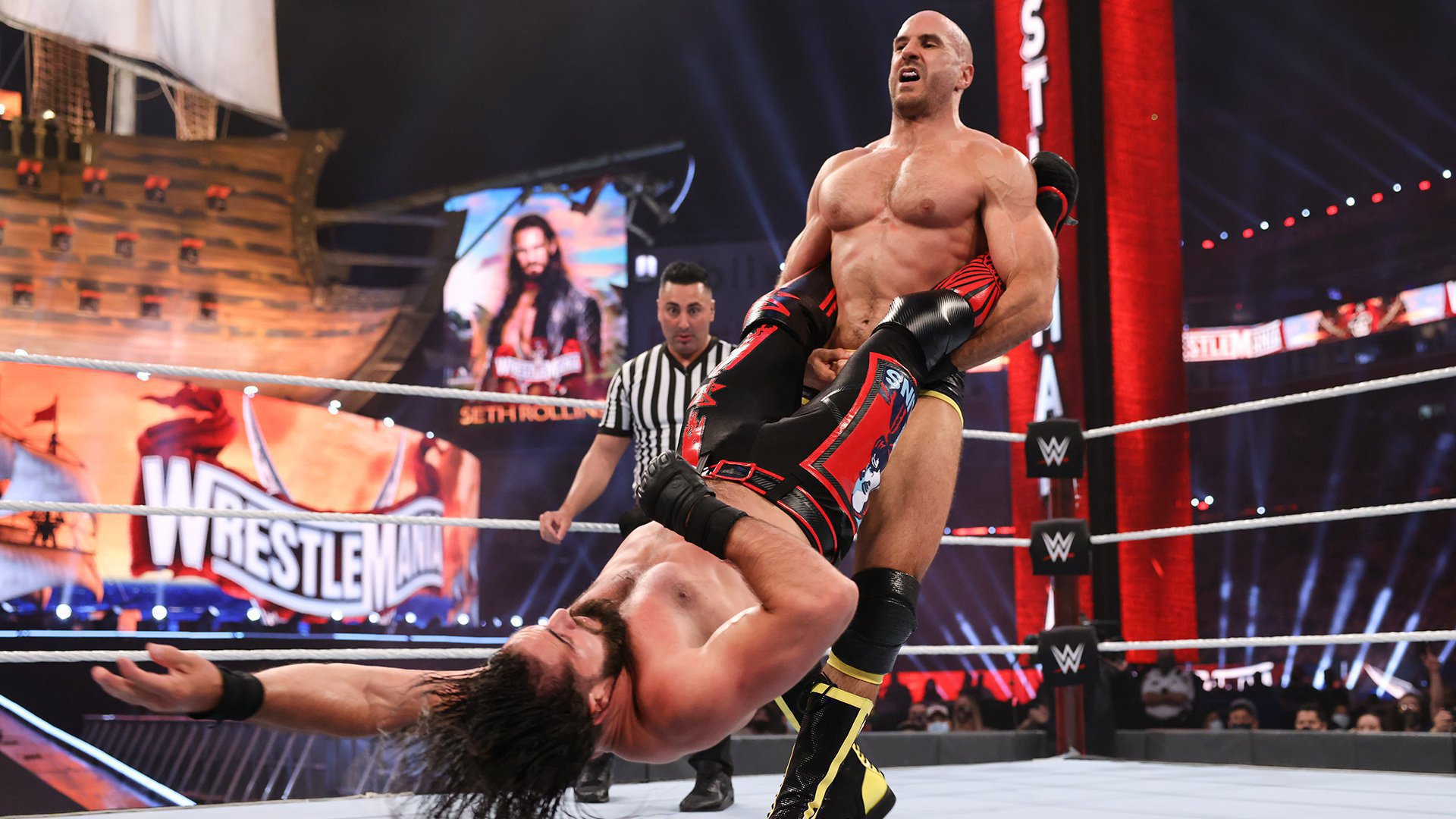 In the biggest match of his nearly decade-long WWE career, Cesaro answered the call.

The Swiss Superman knocked off Seth Rollins in his first-ever singles match at The Show of Shows, seizing his WrestleMania moment.

Cesaro immediately looked to embarrass his foe in front of the WWE Universe with an encore performance of the 22 Swings he performed on SmackDown’s Savior back in February, but Rollins innovatively countered several attempts to evade embarrassment — temporarily.

Eventually Cesaro turned Rollins into a human merry-go-round, but Rollins’ earlier attacks on his arm forced The Swiss Superman to halt after nine trips with the Swing.

Rollins sought to make Cesaro “embrace the vision” with a superplex, Falcon Arrow and unique corkscrew splash, making a strong case for his recently self-minted title as “the new Mr. WrestleMania” on the stage he entered with a gaudy 6-2 record.

Cesaro responded resoundingly, though, countering a Stomp attempt with a massive uppercut before showcasing his strength with the UFO.

Then, it was time for Rollins to go for the ride again, and Cesaro spun him a dizzying 23 times before planting him with the Neutralizer for the landmark victory — his first at WrestleMania in seven years.

World Wrestling Entertainment
share story
Rest or rhythm: Netherlands coach ponders Euro 2020 options Netherlands coach Frank de Boer has a difficult decision to make for his team’s final Group C match at the European Championship
4 MINS AGO • ASSOCIATED PRESS
Denmark looks to seize chance against Russia at Euro 2020 A win over Russia on Monday could still set a long of things right after all that’s gone wrong for Denmark at the European Championship
5 MINS AGO • ASSOCIATED PRESS
Ujpest star Onovo confirms Goztepe interest | Goal.com Ujpest defender Vincent Onovo has confirmed that Turkish Super Lig club Goztepe are interested in his services this summer.
6 MINS AGO • GOAL.COM
Fox Sports™ and © 2021 Fox Media LLC and Fox Sports Interactive Media, LLC. All rights reserved. Use of this website (including any and all parts and components) constitutes your acceptance of these Terms of Use and Updated Privacy Policy. Advertising Choices. Do Not Sell my Personal Info