CHARLOTTE, N.C. (AP) — Hendrick Motorsports believes in developing talent within. Take a job in the parts department or sweep floors in the chassis shop, every entry point within the company offers opportunity to advance.

The Hendrick system makes it a priority to nurture its young talent and incentivize staying with the organization. A mechanic can pay his dues, climb into a leadership position with a seven-figure salary and compete for championships.

The current four-car Hendrick lineup features three homegrown crew chiefs. The fourth? Well, the team broke from pattern and dipped down to the Truck Series for its newest hire.

Knaus, winner of seven titles with Jimmie Johnson, moved into an executive role this year and left a vacancy atop William Byron's young team. When asked who he wanted as his new crew chief, Byron wanted Rudy Fugle, the guy he spent one season with in Trucks when Byron was 18 and brand new to NASCAR's national level.

It was an unusual request — Fugle had never worked in the Cup Series and only crew chiefed one Xfinity Series season 11 years ago — and Hendrick rarely hires outside the organization.

“It can be an intimidating place. We tend to bring in people young,” Knaus, now the competition director said Monday. "The bloodlines run really deep at HMS and we have a culture here that is pretty unique. Looking inside is what we typically do, but in this situation, we felt we wanted someone with experience who had a significant amount of success and could handle pressure.”

Fugle delivered Sunday in his third race as Byron's crew chief. The duo won at Homestead-Miami Speedway, the same track where they'd won their seventh and final race together in 2016 when Byron drove a truck for Kyle Busch Motorsports.

The win made Fugle the second-fastest crew chief to win at Hendrick Motorsports, ahead of Steve Letarte with Jeff Gordon (sixth race), Harry Hyde with Geoff Bodine (eighth) and Robbie Loomis with Gordon (ninth). Only Gary Nelson in 1986 made it to victory lane faster than Fugle with a Bodine victory in the Daytona 500.

Fugle had been identified in 2019 as a potential Cup crew chief when Knaus took over the No. 24 team. Knaus was searching for a new engineer and Fugle became a candidate at Byron's suggestion. But as the interview process stretched on, Knaus recognized that Fugle was effectively running Busch's Truck Series team and was overqualified to be an engineer.

In eight seasons at KBM, Fugle led the program to two driver championships and five owner titles. His trucks won 28 races, seven with Byron in 2016. When Knaus moved into management, he circled back to Fugle.

“He's battled for championships, he's managed a lot and he has fit in remarkably well,” Knaus said. "Quite honestly, I think that's from working with Kyle. Kyle has a very high level expectation of everything he does and that's the same thing we have at HMS.

“So I think Rudy came in not as intimidated as somebody else may have been in that role.”

Fugle, for his part, credited Knaus for handing him a turn-key race team. Although he can make personnel changes at his discretion, Fugle has so far retained the No. 24 personnel he inherited.

And with Byron, the hard work had already bene done. Hendrick moved Knaus to Byron in 2019 after an underwhelming rookie season in which Byron asked to be paired with someone who would push him.

“Chad prepped William to get to this point. I could not have done that three years ago,” Fugle said. “He built a great team. I came in and this was an amazing race team. We’ve got all the right pieces.”

Previous experience together and an existing relationship gave Fugle a jump on his rookie Cup season. Byron qualified on the front row for the Daytona 500 but a car capable of contending was damaged in an early crash. The No. 24 has shown speed and was actually dominant in Sunday's victory — Byron led a race-high 102 of 267 laps.

Next up is Las Vegas Motor Speedway, a traditional intermediate track that will be a truer indicator of where teams currently stack up. Byron and Fugle already have a playoff berth via the victory — a cushion that eases pressure as they continue to build their team.

“What helped us about the previous relationship was the fact that we’ve worked together before and I knew him, I knew how to push his buttons, I knew how to motivate him,” Fugle said. “That helps buy me some time to learn these Cup cars that I don’t know yet.”

Kyle Busch
share story
NASCAR plans to welcome guests back into garages – as long as they're vaccinated There will be stipulations, but NASCAR will soon allow sponsors and some family in the garage area, Bob Pockrass reports.
4 MINS AGO 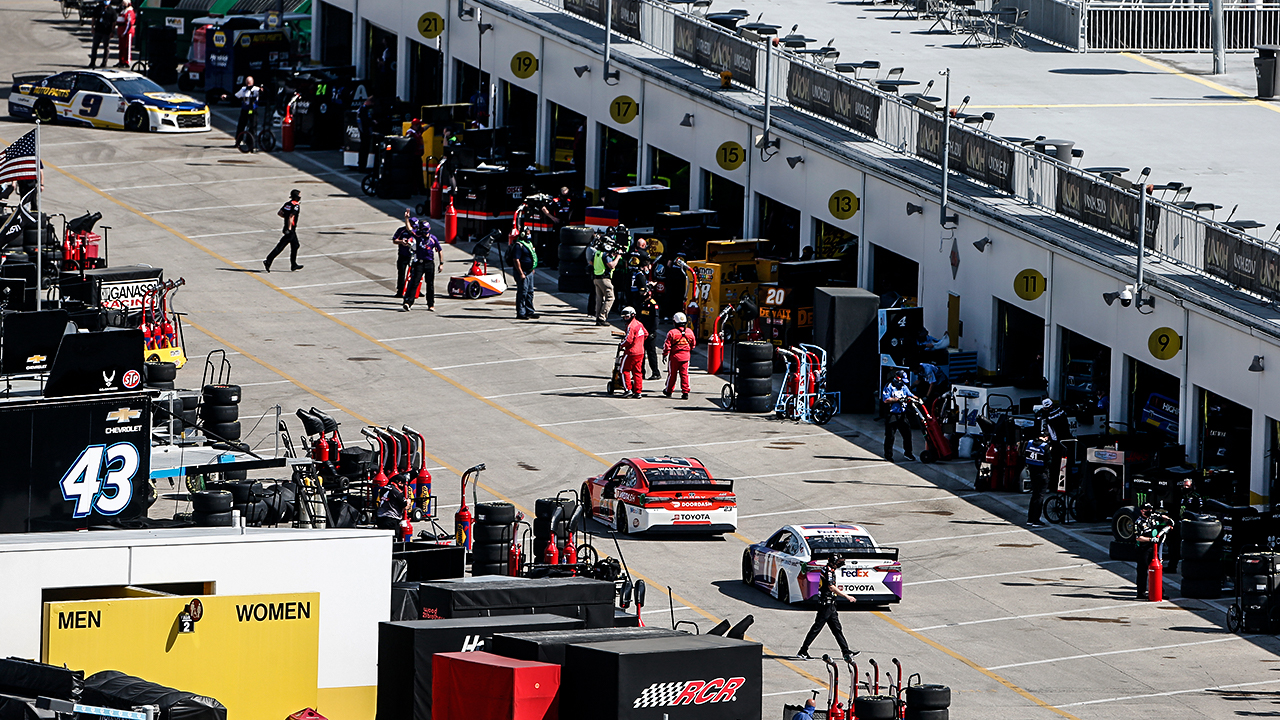