Walker returns from DL to lead D-backs past Tigers

DETROIT — Taijuan Walker felt fresh after nearly a month off, although it took a little while for him to settle into a groove.

“I don’t know why I was so nervous,” the Arizona right-hander said. “First game back, maybe, but after the first inning, I felt a lot better, more comfortable.”

Walker pitched five sharp innings in his return from the disabled list, and the Diamondbacks won their fourth straight game, 2-1 over the Detroit Tigers on Wednesday night.

Arizona scored two runs in the first inning, and that turned out to be all the Diamondbacks needed.

That was some kind of first game back for Taijuan Walker, huh? pic.twitter.com/ucWKre7j1J

Walker (5-3) allowed a run and six hits in his first appearance since May 19 . He had been out because of a blister on his right index finger.

“I thought Taijuan was very good,” manager Torey Lovullo said. “First day back, it was all very encouraging. He got to the pitch count that we wanted him to get to, and gave us five really, really good innings, and the rest of the guys picked it up from there.”

Walker was lifted after 82 pitches, then Randall Delgado pitched three scoreless innings of relief. Fernando Rodney struck out the side in the ninth for his 18th save in 21 chances.

Arizona is 9-1 in interleague play this season. The lone defeat was at home May 10 against Detroit.

The Diamondbacks took the lead right away against Zimmermann. Gregor Blanco led off the game with a single to left that got past Justin Upton for an error. Blanco went all the way to third on the play and scored on David Peralta’s sacrifice fly. Brandon Drury added an RBI single, but Upton redeemed himself by throwing Chris Owings out at the plate.

Just like you, Paul Goldschmidt is enjoying all this @Dbacks winning. #OurSeason pic.twitter.com/Dezo5Sgfl8

Detroit was hitless until the third, when Ian Kinsler managed a two-out double and scored on Alex Avila’s single.

Walker struck out six and walked one, and Zimmermann was impressive as well. After Chris Hermann’s single to start the second, Arizona didn’t have another baserunner until the seventh.

“The first inning, I gave up four hits, I believe,” Zimmermann said. “A little blooper and three ground balls that got through the hole. Other than that, I felt like my stuff was the best it’s been in a Tigers’ uniform.”

It was the third straight quality start for Zimmermann and the first time this year he had gone more than six innings. He struck out six without a walk and lowered his ERA to 5.35.

Arizona (41-26) matched the franchise’s best start through 67 games and remained a half-game out of first place in the NL West.

“We’re winning one-run games on the road, and I think that’s what teams do when they play into the end of the season and have meaningful games,” Lovullo said. “We’re doing a lot of things right. I’m very pleased with that.”

Torey Lovullo on Taijuan Walker – he looked like some of his fastballs had an extra gear pic.twitter.com/yomxpNpBVc

The Tigers struck out 11 times in the game and drew only one walk.

After a one-out walk to Avila in the first, Walker committed an obvious balk when he began his motion to the plate but didn’t release the ball. It looked awkward, but he was able to continue and there was no sign of an injury.

“My cleat got caught in the ground, and I just lost my footing,” Walker said.

Arizona is off Thursday before starting a three-game series at Philadelphia. LHP Patrick Corbin (5-6) starts Friday night for the Diamondbacks against RHP Aaron Nola (3-4). 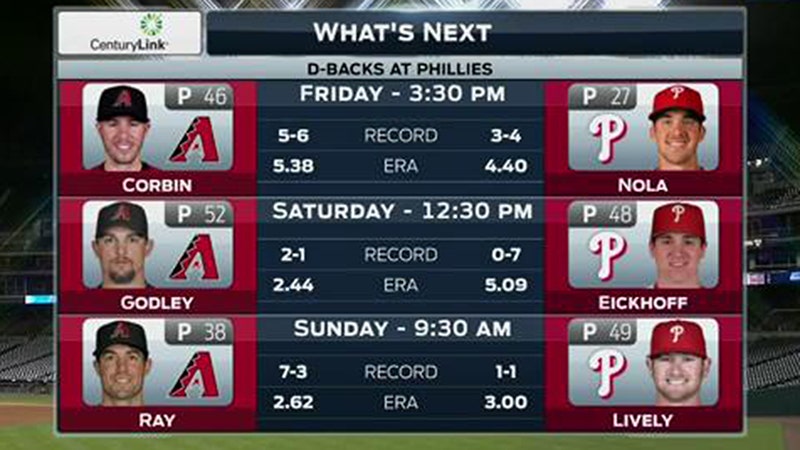