GLENDALE, Ariz. — The Vancouver Canucks weren’t going to let a pair of three-goal leads slip away in the same week.

After blowing a big advantage in an overtime loss to Chicago on Saturday, the Canucks held on Wednesday night for a 4-1 win over the Arizona Coyotes.

Bo Horvat and Sven Baertschi each had a goal and two assists, with Loui Eriksson and Horvat scoring 17 seconds apart during a three-goal second period. Alexandre Burrows also zipped in a shot, knocking goalie Mike Smith out of the game 6:49 into the period. Burrows had an assist in a battle of teams at the bottom of the Pacific Division standings.

The Canucks’ third line of Horvat, Baertschi and Burrows combined for eight points.

The Canucks talked about the loss to the Blackhawks in two different meetings upon arriving in Arizona. 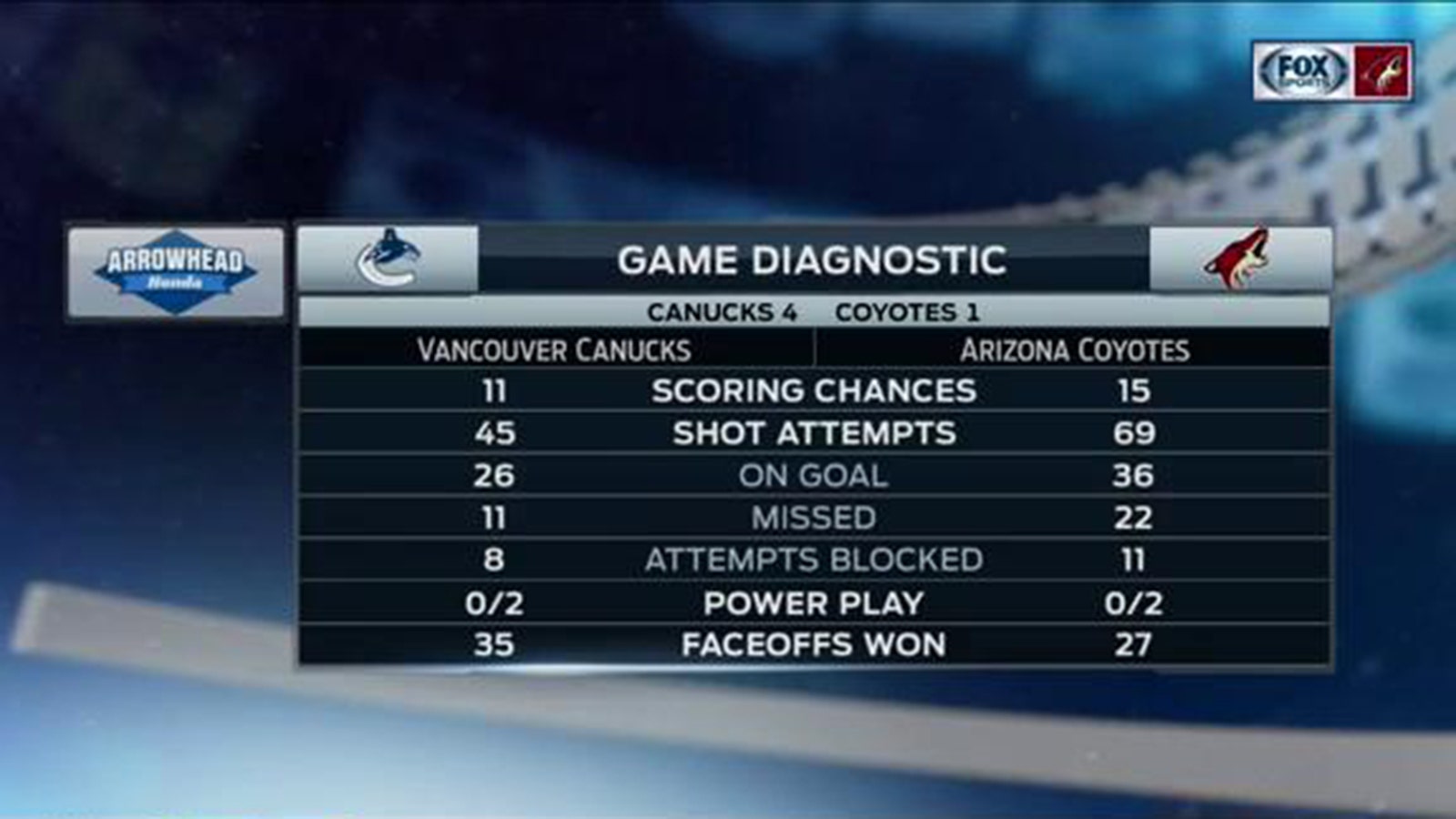 "Guys felt comfortable. We knew what we had to do," Burrows said. "We had to apply going into the third. We wanted to make high-percentage plays and play the right way and not sit back too much, and I thought we did a better job."

Ryan Miller had 35 saves and improved to 10-1 in his career against Arizona. Smith had 13 stops before departing and Louis Domingue finished the game, making nine saves.

"It was awful. I was sleeping from the first goal," Smith said.

Arizona tied it at 1 when Anthony DeAngelo’s shot deflected in off Christian Dvorak 58 seconds into the second. But the Canucks answered with their two quick goals.

Eriksson beat Smith with a dribbler of a shot off a bouncing pass from Markus Granlund from behind the net. Then Horvat passed to Burrows, who sent the puck back to Horvat for a shot through Smith’s glove side for a 3-1 lead.

"We played such a strong game for 40 minutes against Chicago and we brought that into tonight’s game," Horvat said. "The bounces went our way."

Burrows scored after collecting the puck off the boards, his long wrist shot getting past Smith to give the Canucks a three-goal lead.

Vancouver beat Arizona for the second time in less than a week and has points in four of its last five games, three of those being wins. The Coyotes had played five straight one-goal games until Wednesday but have lost five of their last six.

The Canucks took advantage of a turnover by defenseman Oliver Ekman-Larsson deep in his own zone to take a quick lead. Ekman-Larsson blindly backhanded the puck on a clearance attempt to Horvat, who assisted on Baertschi’s redirected shot at 3:08 of the first period.

"We’ve got to make plays, not turn it over and we need saves," Coyotes coach Dave Tippett said. "Just do the job, do the job together and we’ll find ways to win."

Vancouver took a lead into the third period for just the third time this season.

NOTES: Baertschi, a former junior hockey teammate of ailing Coyotes minor leaguer Craig Cunningham, paid tribute to Cunningham by writing the word "Cunny" on his sticks. Cunningham, who plays for Tucson of the AHL, collapsed on the ice before a game last weekend and is hospitalized in critical condition. … F Jack Skille is out with an upper body injury and was scratched. … Vancouver called up C Joseph LaBate from Utica of the AHL. LaBate made his NHL debut on Wednesday. … Coyotes D Luke Schenn and D Jakob Chychrun were scratched. … Coyotes captain Shane Doan tied Rod Brind’Amour for 20th place on the NHL’s career games played list at 1,484.

Canucks: At Dallas on Friday night in the third game of a three-game road trip.

Coyotes: Host Edmonton on Friday night in the finale of a three-game homestand.