TUCSON, Ariz. — There was never a doubt Greg Byrne would be an athletic director. Like father like son.

The perks of getting to go to games and root for the home team were just added bonuses, even if the home team changed from time to time.

"It happened through osmosis," Byrne said in an interview as Father’s Day approaches.

It’s his few-page essay from the third or fourth grade on what his future plans were: Be like dad, Bill Byrne, a long-time athletic director at various stops. 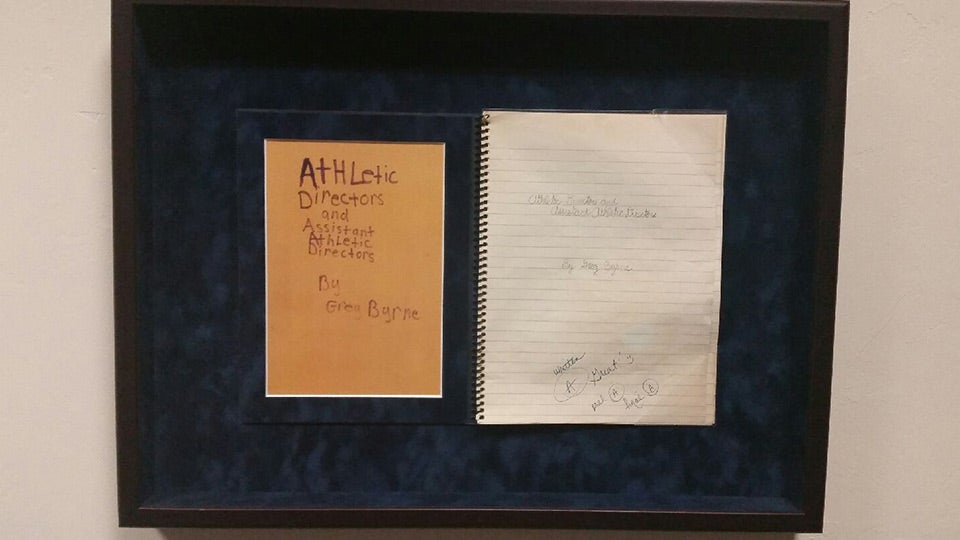 Those conversations were a hint of what was to come for Greg, Arizona’s up-and-coming athletic director. It’s a role he’s seemingly been grooming himself for since those grade-school days with the help of his father.

"I’m very proud of him. He’s a rock star in our profession," said Bill Byrne, who retired  three years ago after an impressive 29-year run as athletic director at Oregon, Nebraska and Texas A&M.

It was while his father was working as an associate AD at San Diego State where young Greg’s career plans might have been derailed, due to a grammatical misunderstanding.

"Every year there was a FUND drive," Greg Byrne said, enunciating the word ‘fund.’  "And when I heard it (as a kid) I’d think, fun drive? I hate sitting in the car. It’s not fun to drive. What are you talking about?"

Nearly 30 years later, Byrne is one of the best fund drivers to be found.

"I have been exposed to it my whole life," he said. "I thought it was about going to sporting events all my life. But it’s all I knew."

Sharing his father’s love for sports and administration, Byrne wanted in. He watched, listened and took mental notes. And, of course, schmoozed.

"There are probably not a lot of things I’m not prepared to do or run, but I think part of the reason I was chosen at the age of 36 (to become the AD) at Mississippi State and then Dr. (Robert) Shelton and Ced Dempsey brought me here to Arizona was because, in a lot of ways, I had 36 years of experience," Byrne said. "I was fortunate with that."

What struck Greg early — and still stands today — were the traits that made his father good at his job. He was firm yet yielding; strong yet subtle.

Bill and Greg Byrne at a New Mexico football game.

"He was very good at not making emotional decisions," Byrne said. "I think his decision making was outstanding. And, he was great at delivering the message."

Byrne proudly mentioned that his father was a national high school debate champion, the first in his family to go to college, student body president at Idaho State.

"One of the things I learned early on is if you have to have a tough conversation, be direct and be honest," Byrne said. "Don’t raise your voice, but be direct and honest. Then there is no question where everybody stands."

Greg always knew where his father stood, whether he was wearing Oregon green, Nebraska red or Texas A&M maroon. And he realized time was precious, given the 24-7 part of the job.

"I got to have some really unique experiences at a young age because of what my dad did," Byrne said. "I understood that we might not be able to go camping every weekend, but we had times together that were very special and they meant a lot. He went out of his way to make sure we had those times."

Like getting to go to the biggest games and numerous Final Fours, beginning when he was a teenager.

"The boys would tease me that they never spent a Christmas past 10 o’clock in the morning because by then we’d have the tree on the curb and we’d be headed to a bowl game," Bill said.

Don’t ever stop evolving. That’s an inspiration to all of us. Don’t get stuck in the mud and think you have it figured out for all of us.

"They were more quality than quantity," Greg said. "The Final Four was our trip together. I (now) take Davis (his son), and that’s a special time, bonding time."

Bonding came in many forms as a youngster, whether it was helping paint the hallways at Oregon’s old Mac Court, installing carpet or painting parking spots. Back then, athletic budgets were tight. Elbow grease was the sweat equity.

"He taught me how to work," Greg said.

He also taught him perspective. Early in his career, Greg wanted to be on the fast-track to success.

"One of my weaknesses was my patience," Greg admitted. ‘I didn’t let it evolve and just let it happen. (Sons) Nick and Davis were very young. And I was working every weekend and every night."

He wanted his life back, so he got out of the business, leaving his job as associate AD at Kentucky to work for a UK donor.

"It was one of the best things I did; it was a solid company," he said. "I had financial success, but I was miserable. I missed college athletics. What it did was allow me to refocus on my passion.

"My dad was able to give me good, solid advice at the time."

And that was: Do what is important to you.

He got back in the family business at Mississippi State, later becoming the school’s AD.

"I have been very fortunate ever since," he said.

Just last month, Byrne called his dad to get advice on hiring a new baseball coach, picking his brain for a name or two.

Calls between father and son were frequent when dad was still the AD at A&M. From time to time, father called son for advice. They talk at least once a week now.

"He was almost retired and still calling me and asking questions," Greg said. "He’s 67 years old and had been an AD almost as long as anyone in the country, and he was calling a young whipper-snapper for my thoughts.

"What it showed was: Don’t ever stop evolving. That’s an inspiration to all of us. Don’t get stuck in the mud and think you have it figured out for all of us. He was one of the most accomplished individuals in the business, and here he was still reaching out."

"But not only am I proud of him, but I was also proud of my mom, who had a career of her own but interrupted it to chase my dad’s career. There are things I do that emulate what my dad did, but also what my mom does, too."